Support on Patreon Follow @wellshwood
12 Comments
Smell of the Crowd 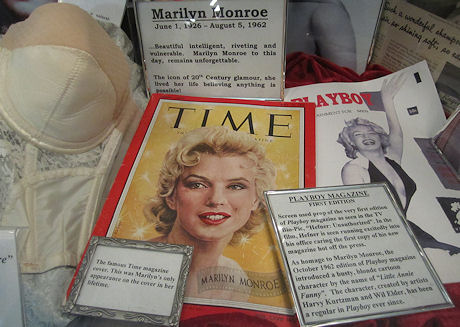 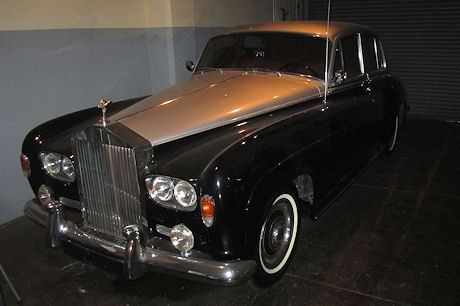 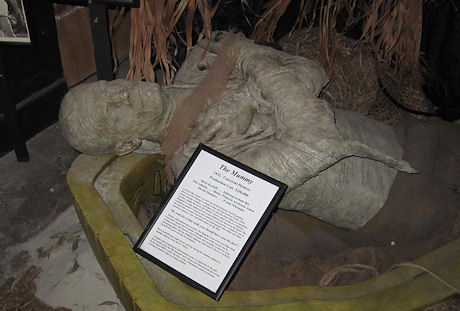 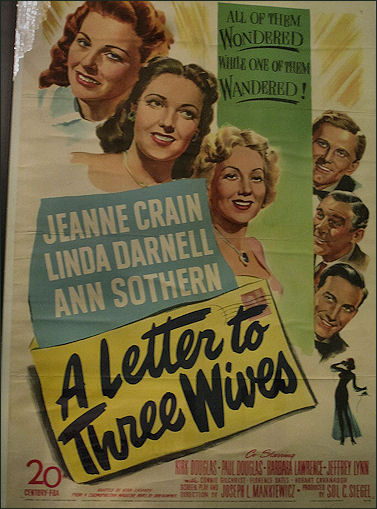 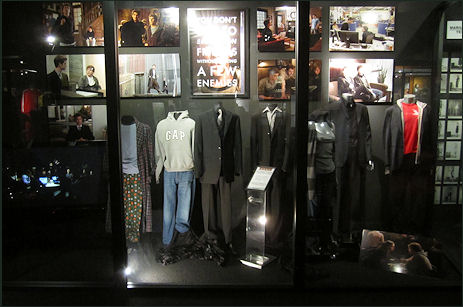 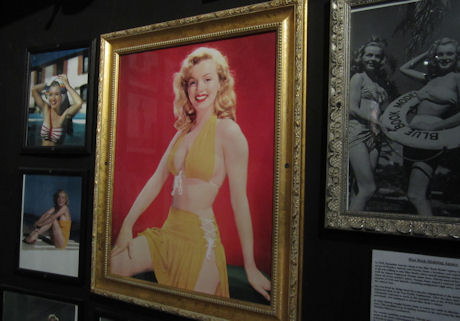 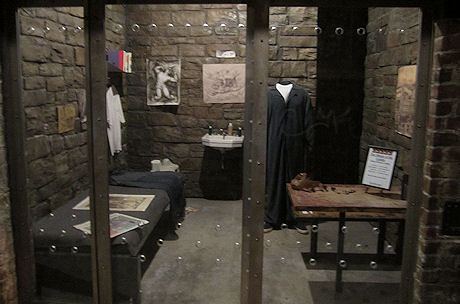 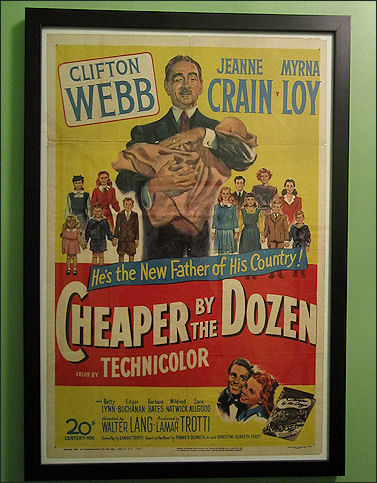 “How much money does James Cameron need?,” a friend asks. “I’m guessing he can pump premium into his car even if it takes regular. So why would he put his name and then his face on commercials for Sanctum? Which, to be generous, is more or less mediocre. Is it because Cameron believes in 3D? I get that. He should champion good 3D movies. But this? Why?”

Partial answer: Because Cameron is simply queer for almost anything to do with underwater exploration and/or adventure, and because he godfathered this film and is therefore bonded and protective of it, come hell or high water.

Since all I did today column-wise was take photos, I was extremely frustrated by my failure to snap a tiny cherry-red convertible that was no bigger than an amusement park bumper-car. My first thought upon seeing it was “wait…that’s real? Look like some kind of electric toy car.” A man and a woman were sitting in it, about to pull into traffic on Sunset in the Brentwood area. I pulled off into a side street about a half-mile ahead and then turned around and waited at the curb, hoping they’d catch up. Alas, they never showed. 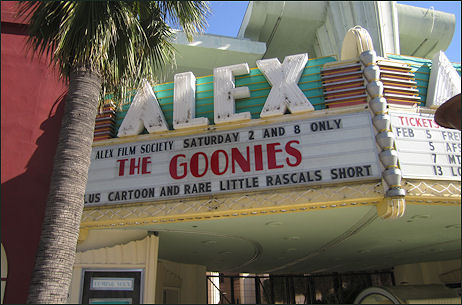 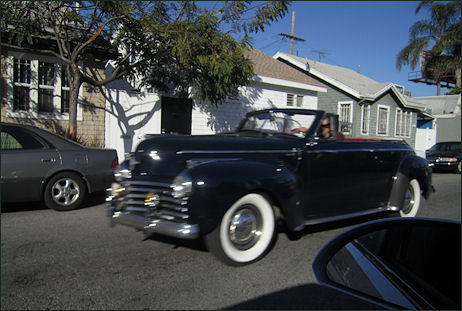 Tooling along Fountain on my way over to the Hollywood Museum for a Tom O’Neil video chit-chat, some kind of mid ’40s convertible suddenly roared past in the opposite direction. I barely had time to turn the camera on and shoot. 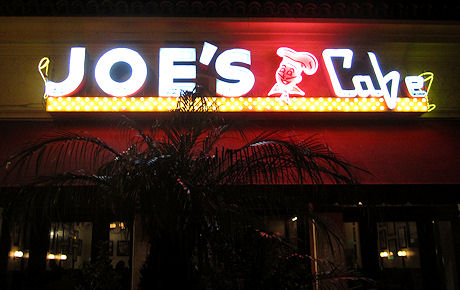 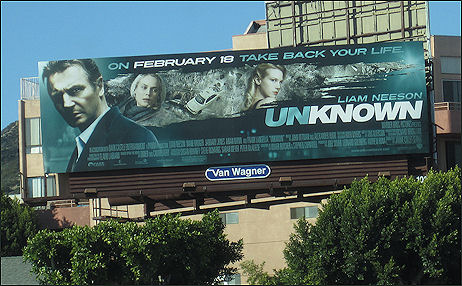 Today was a stuff-to-do-in-Los Angeles day — meet with accountant, banking matters, rent, auto mechanic consultation, etc. (Necessitated in part by a recent decision to temporarily move back here later this month.) It began at a friendly Starbucks in a Malibu shopping center. I was halfway into my “Chill The Eff Out” summary when all these kids came in and started singing Sound of Music tunes. A perfect moment.

Movieline‘s Stu Van Airsdale has written a brief but amusing summary of the severe turns, lungings and lurchings in the Oscar race over the last week or so, and advised everyone — perhaps sagely and perhaps not — that “it’s a long race, and it’s closer than you think. Stuff you never thought could happen can happen and will happen.” (Like what, for example?) “Because anyone who insists he or she has the answer is, in reality, the most clueless one in the bunch,” he proclaims.

Quoting recent postings by myself, Tom O’Neil, Sasha Stone and Scott Feinberg, Van Airsdale describes the “torrent of shock that washed away so much of peaceful, quiet Oscar Village after The King’s Speech‘s DGA and SAG two-fer last weekend” as a case of “mass panic.” I wouldn’t call it exactly that. I would call it mass shock, mass resignation and mass bitterness all thrown into the blender….ruuuhhrrrggghhh!

Either way it’s premature, Van Airsdale insists, because “excuse me…Oscar voters haven’t voted! The aforementioned guild overlap aside, there are literally hundreds of thousands fewer actors and directors in the Academy than in those guilds combined, and they don’t even have ballots in their mailboxes yet!”

“So float all the theories you want about Speech‘s ascendancy, sling all the mud you can at the new front-runner, and indulge all the hindsight you can muster. You may be right! But if this week has shown us anything, it’s that you never know. Either way, everyone — deep breaths! We’ve got three more weeks of this crap.”

How sad and curiously timed that Last Tango in Paris costar Maria Schneider, 58, has died only a few days before the 2.15 release of Bernardo Bertolucci‘s landmark film on Bluray, apparently from cancer. I’m sorry. Condolences to friends, family, fans.

Anyone looking for a first-hand sense of what’s happening in Egypt right now needs to read this 2.2 Pajamas Media column by Roger Simon, and especially listen to an mp3 interview with the Egyptian blogger Sandmonkey — “an extremely cynical, snarky, pro-US, secular, libertarian, disgruntled” — that Simon has embedded within.

“The witty and courageous Egyptian blogger Sandmonkey is currently in hiding in his native city of Cairo, moving from one friend’s apartment to another, as supporters of Hosni Mubarak pursue him and other democracy demonstrators,” Simon writes.

“I had been trying to reach Sandmonkey — who has written for Pajamas Media — ever since the demonstrations broke out, because I suspected he would be in the thick of things. But as most know, the internet was cut in Egypt until Wednesday.

“When I finally got through to him late Wednesday night Pacific time, I discovered that, boy, were my suppositions ever correct. Sandmonkey was indeed in the thick of things and his on-the-ground observations that I recorded in this Skype audio-only interview were in many ways surprising and contradicted what we are hearing in our media.”

Final graph from Sandmonke’s latest posting: “The End is near. I have no illusions about this regime or its leader, and how he will pluck us and hunt us down one by one [until] we are over and done with and 8 months from now will pay people to stage fake protests urging him not to leave power, and he will stay ‘because he has to acquiesce to the voice of the people.’ This is a losing battle and they have all the weapons, but we will continue fighting until we can’t. I am heading to Tahrir right now with supplies for the hundreds injured, knowing that today the attacks will intensify, because they can’t allow us to stay there come Friday, which is supposed to be the game changer. We are bringing everybody out, and we will refuse to be anything else than peaceful.

“If you are in Egypt, I am calling on all of you to head down to Tahrir today and Friday. It is imperative to show them that the battle for the soul of Egypt isn’t over and done with. I am calling you to bring your friends, to bring medical supplies, to go and see what Mubarak’s gaurantees look like in real life. Egypt needs you. Be Heroes.”