It’s very nice that Queen Elizabeth has seen and approved of The King’s Speech , as Indiewire‘s Anne Thompson reports. The 84 year-old monarch called it “moving and enjoyable” and “was clearly amused by some of the lighter moments.” Well, what’s she gonna say? She’s invested every which way. Thompson ends by saying “that’s one more for team King’s Speech…your move, Social Network.”

Everything Is A Remix: KILL BILL from robgwilson.com on Vimeo.

I bought this All About Eve Bluray at Laser Blazer about two hours ago. And as I was leaving I remembered, of course, that it won the Best Picture Oscar for 1950. And this led me to wonder what today’s cuddly-bear Academy voters would think of this Joseph L. Mankiewicz classic if they were transported back 60 years. 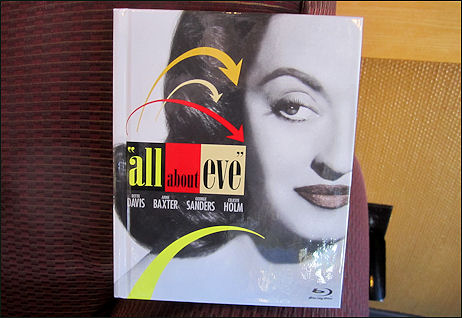 Cuddly-bear voters are the ones who are drawn to movies that provide the kind of warm, reassuring comfort-blanket emotions that are found in The King’s Speech and who therefore aren’t voting for The Social Network because it’s too chilly and arcane and there’s no one likable to root for.

So if the Cuddlies were to be transported one by one in Rod Taylor‘s time machine back to February 4, 1951, their general sentiments about All About Eve would probably go as follows:

“It’s a very good film, but I just didn’t care about anyone, and it’s all happening within this narrow little world of theatre people. Yeah, great dialogue, but witty banter only goes so far. Where’s the heart? And nobody seems to learn anything. Everyone in this film except for Thelma Ritter, Celeste Holm and Gary Merrill is unstable or scheming or generally unpleasant. Bette Davis is a bitter insecure meltdown case and screeching all the time, Anne Baxter is positively reptilian and George Sanders is one of those poison-pen critics with ice water in his veins. And what happens at the end? Okay, just desserts — Baxter is going to get hers. But emotionally I just felt…I don’t know. It didn’t reach me.

“I’m not putting All About Eve down, mind. It’s fine, it’s a good film, very well directed. But I like Father of the Bride better. I can’t help it but I love it. You don’t watch that film — you feel it. Poor, stressed out, economically suffering Spencer Tracy! Losing his daughter and also gaining a son, and going through hell the whole time. You just feel for him.”

There are many cultural similarities between Manhattan and Los Angeles, but one thing you never see in Manhattan are tan, balding 60ish guys driving really nifty, new-looking Bentleys with obviously younger (by at least 20 or 25 years) pretty women riding shotgun. Just before I spotted this guy I noticed another 60ish (or perhaps 70ish) guy driving down Olympic is a red Beemer convertible, also tan and a little jowly, wearing a perfect white T-shirt and what looked like a pair of brown Ray-Bans, his white-silvery hair and sideburns whipping in the wind. I looked and muttered to myself, “Only in L.A.” 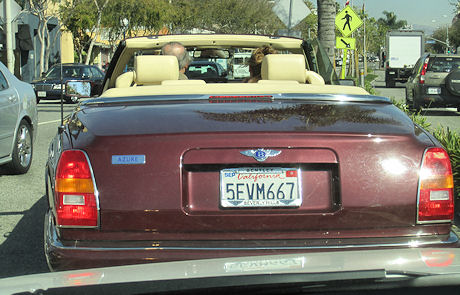 I’m typing this in a Starbucks near the Malibu Canyon exit off the 101 north, and there are two female shriekers sitting two tables away, throwing their heads back and laughing riotously at whatever the fellow they’re sitting with, another balding older guy in a white T-shirt (and also a vest), is saying. The women appear to be laughing really loudly in order to please and flatter the older guy. Because to go by the look of this guy, whatever he’s saying, trust me, it’s not that funny.

I’ve given them three dirty looks so far; they’re ignoring me, of course. That goes with being a shrieker. You don’t care what anyone else is thinking or feeling, ever. You’re just going with your ectstatic flow, and eff everyone else.

I need around five or six hours straight to file the six or seven items/riffs/stories that I try to post each day, and if that gets interrupted all the eggs in the air fall to the floor — glop, yolk, eggshell bits. Today is one of those days, and l don’t know what to do here except grim up and stick to the plan.

From 7 am this morning I’ve been caught up in more plannings and preparations for my return to LA on or about 2.20. I have to drive back to Santa Barbara around noon and file some more stories (including a scheduled Alejandro Gonzalez Inarritu phoner) before this evening’s Virtuosos Award ceremony at the Lobero at 8pm, honoring Lesley Manville (Another Year), John Hawkes (Winter’s Bone), Jacki Weaver (Animal Kingdom) and Hailee Steinfeld (True Grit).

Hey, what about The Social Network‘s Andrew Garfield?

For whatever reason the Criterion guys have posted Pauline Kael‘s landmark review of Last Tango in Paris, which appeared in The New Yorker on 10.28.72. Maybe it’s been sitting there forever, but for the time being it obviously helps MGM Home Entertainment’s Tango Bluray, which streets on 2.15.

My favorite portion: “We all know that movie actors often merge with their roles in a way that stage actors don’t, quite, but Brando did it even on the stage. I was in New York when he played his famous small role in Truckline Cafe in 1946; arriving late at a performance, and seated in the center of the second row, I looked up and saw what I thought was an actor having a seizure onstage. Embarrassed for him, I lowered my eyes, and it wasn’t until the young man who’d brought me grabbed my arm and said, ‘Watch this guy!’ that I realized he was acting.

“I think a lot of people will make my old mistake when they see Brando’s performance as Paul [in Last Tango]; I think some may prefer to make this mistake, so they won’t have to recognize how deep down he goes and what he dredges up.”

As legendary as Kael’s review is/was, there are certain phrases in Norman Mailer‘s 1973 essay on the film that are burned into my brain tissue. It’s shame that the piece isn’t online (or doesn’t seem to be — I’ve searched and searched and it won’t turn up) but I can recall two passages, both about the fully-vertical, fully-clothed scene when Brando and Maria Schneider first slam ham. Mailer described it as Brando “cashing the check that Stanley Kowalski wrote 35 years ago.” Describing the instant when Brando tears off Schneider’s panties, he wrote that “the cry of that fabric is the most thrilling sound to be heard in world culture since the four opening notes of Beethoven’s Fifth.'” If anyone can find this article, please forward.