With the recent dispute between Donald Sutherland and Peter Bart over the filming of that legendary Don’t Look Now sex scene (which Bart has more or less admitted error on by telling The Hollywood Reporter‘s Merle Ginsberg that the scene in question was shot “over four decades ago!”), there’s considerable interest right now in Nicolas Roeg‘s 1973 thriller. Which bodes well for the British Region 2 Bluray that streets on 6.27.11. 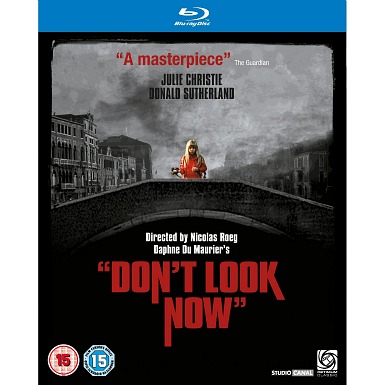 Will there be a version for Americans without multi-region Bluray players? Of course not. Or at least not in the foreseeable future.

In a speech given today at CinemaCon, the exhibition industry’s annual convention in Las Vegas, James Cameron has announced he’ll make Avatar 2 and 3 “with a native frame rate of 48 or 64,” which will deliver fluid motion in the vein of Maxivsion (which Roger Ebert has been promoting for years) or Showscan. Cameron will demonstrate various frame-rate samples tomorrow at the Coliseum theater inside Ceasar’s Palace.

MSN’s James Rocchi tweeted as follows: “James Cameron keeps talking about Avatar 2/3. It’s the only time in history the nerd who wants a sequel nobody else does has the power to do so.”

$275 is too much for a seat at a Yankee game. It’s not even outdoors on the first or third-base line where you can smell the dirt and grass — it’s an ambassador club box over the right-field bleachers. They used to charge 25 cents for a bleacher seat in Babe Ruth‘s day. I don’t know what prices were like when Roger Maris and Mickey Mantle were slamming homers, but I’ll bet they had some relationship to the price of rice…unlike today.

TheWrap‘s Sharon Waxman has reported that there may have been “significant misinformation” about the shooting death of Hollywood publicist Ronni Chasen last November. Apparently she may have taken three in the arm and two in the back rather than five in the chest…whatever. The feeling here has always been that the official explanation is ridiculous. The late Harold Smith shot Chasen at a Sunset Blvd. stoplight after chasing her along that high-speed avenue on a friggin’ bicycle? It may have happened, but no self-respecting screenwriter would dream up such a scenario for fear of being laughed out of town.

Last Tuesday Deadline‘s Michael Fleming outlined the latest configuration of Sony’s Cleopatra biopic — Angelina Jolie in the lead, David Fincher possibly directing, Scott Rudin producing from a script by Brian Helgeland (but with a new punch-up writer possibly being sought), based on Stacy Schiff‘s Cleopatra: A Life. An inside source says it’s all “conjecture” at this point, but I’m hearing the project may actually come together.

A guy I don’t know much less trust directed me to an IMDB comment posting, allegedly written by someone in the loop, claiming that (a) Fincher is “almost confirmed,” (b) “Filming to begin late in the year (Malta, Cyprus or Egypt),” (c) “The roles of Julius Caesar and Marc Antony to be given to ‘no big stars,'” presumably because the intent is for Jolie to dominate and be central to the proceedings in every conceivable way, (d) “Brad Pitt was never considered for the role of Marc Antony”…THAT WOULD HAVE BEEN TOTALLY RIDICULOUS!, (e) “The film will be a political epic,” and (f) “Expect a fabulous work of make-up…Angelina to appear completely unrecognizable.”

This last bit of possibly imagined information is the most interesting to me. Cleopatra was not a ravishing beauty, by all historical accounts. The idea of Jolie making herself look a wee bit homely with a different nose or something sounds highly intriguing. It worked for Nicole Kidman in The Hours. When’s the last time a world-famous actress significantly altered her looks to portray a head of state? When Bette Davis had her head shaved for The Virgin Queen?

I’ve read about how this would be “the first telling of the Cleopatra story from a woman’s perspective” and that “instead of simply being a seductress, as she was portrayed by Elizabeth Taylor in the 1963 Joseph L. Mankiewicz-directed film, Cleopatra is also a shrewd politician, strategist and warrior, with sexual charisma to spare.”

What? Mankiewicz and Taylor’s Cleopatra wasn’t just some titillating queen who wore heavy mascara. She was written and portrayed as a complex combination — seductress, clever politician, willful negotiator, perceptive reader of character, something of a battle strategist. So we’re going to have to hear a bit more about the new version to be persuaded that it’s going to be a markedly different thing than 20th Century Fox’s “monumental mouse,” as critic Judith Crist called it in her review.

Here’s how I put it to a friend this morning:

“I’ve been in denial about Sony/Rudin’s Cleopatra project, and now I’m finally facing it full-on: David Fincher, my hero, might actually direct this? Wow.

“Whatsername’s source book is entirely respectable, and there certainly ought to be room for another take on the Cleopatra saga, etc. But — it might as well be faced and dealt with straight-on — the stink from Joseph L. Mankiewicz’s 1963 turkey, despite Rex Harrison‘s superb performance and other stirring and agreeable aspects, is, 48 years after the fact, still lingering in the air. And so there’s a slight feeling of ‘uh-oh’ or at least ‘oh…really?’ when you hear about a Cleopatra feature.

“Plus I have to wonder how persuadable Jolie, a tabloid queen to millions, can be in a historical context? I’m thinking of my reaction to her as Alexander the Great’s mom in Oliver Stone‘s film. But if they make her look a bit homely, maybe.

“I’m just being honest and open here. Rudin’s project, image- and expectation-wise, has to overcome the stigma of the 1963 film, and that in itself, however unfair, is going to be a bit of an endeavor. And I’m also asking myself how Fincher, a modernist and/or futurist and a digital guy who’s never gone further back in time that early 20th Century New Orleans, is going to find his way into an exotic 2000 year-old culture…the mind reels.

“I’m not slagging this project at all. I’m just being upfront and honest about the associations that people have with the name ‘Cleopatra,’ etc. If anyone can turn the image around, it’s Fincher and Rudin…don’t get me wrong. But the image does need turning around because everyone in the media remembers what a catastrophe the ’63 version was….that’s all I’m saying. Obviously doable. An educating process required.”

FilmDistrict’s decision to open Bruce Robinson‘s The Rum Diary, an apparently troubled adaptation of the Hunter Thompson book with Johnny Depp in the lead role, on 10.28 is well and good. FilmDistrict co-founder Graham King has said he’s “extremely proud to bring this novel to film and to honor Hunter’s legacy”…hah!

But let’s not forget that the film may be opening tomorrow (3.31) in Moscow, according to a longstanding IMDB listing. And if it is, let’s hope someone is there to review it. I mentioned on 2.5 that I’d love to fly to Moscow for the occasion, but you have to live within certain limits.

In my head, Farley Granger has always been and always will be “Guy Haines,” the anxious, darting-eyed, pinch-mannered tennis player in Alfred Hitchcock‘s Strangers on a Train (’51). The 85 year-old actor, also known for his performance as an anxious, darting-eyed, pinch-mannered gay murder accomplice in Hitchcock’s Rope, passed on 3.27, but for some reason the news is only just breaking now.

Granger copped a long time ago to being openly bisexual or mostly gay or what-have-you.

Here’s an amusing portion from his Wiki bio: “In Rope, Granger and John Dall portrayed two highly intelligent friends who commit a thrill killing simply to prove they can get away with it. The two characters and their former professor, played by Jimmy Stewart, were supposed to be homosexual, and Granger and Dall discussed the subtext of their scenes, but because The Hays Office was keeping close tabs on the project, the final script was so discreet that screenwriter Arthur Laurents remained uncertain of whether Stewart ever realized that his own character was gay.”

Until this moment I myself have never even flirted with the notion that Stewart’s character was supposed to be (or might have been) gay. I don’t think Stewart had it in him to play “gay.” He was too aww-shucksy for that.