Earlier today an HE reader ran a portion of my quote from John Anderson‘s 4.8 N.Y. Times piece about spoilers, so here’s the whole thing: “There’s no holding on to anything these days. It’s just a matter of minutes of searching around. And it’s a shame, because the greatest thing is seeing a film fresh, with no advance buzz. Now you know everything about a film before you go see it. But I’m part of that process, so who am I to complain?”

My point was that none of us can go home again. I used to see long-lead screenings of new films in the early ’80s as a Manhattan freelancer, and every now and then it was beautiful. One of my all-time transporting movie experiences was seeing Local Hero totally cold, before anybody had said a single word about it. But those days are long gone and no amount of accusatory finger-pointing and hand-wringing will bring them back.

Nobody should ever reveal a significant third-act plot point of any kind (and revealing that Meek’s Cutoff ends with the sight of a big, half-dead pine tree is definitely not a spoiler), but sometimes you have to let this and that detail leak out if you’re going to mix it up and discuss new angles and undercurrents in quasi-early bird fashion..

One of the really great things about dogs is that they actually look at the camera when you take their picture. Cats might glance at it for a second, if that. 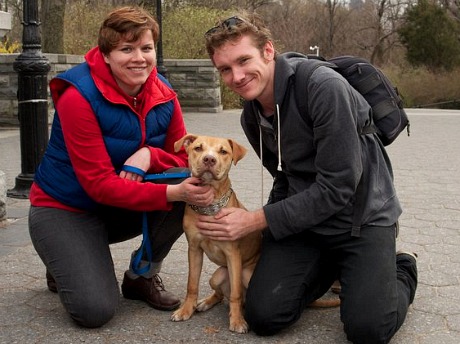 “You know what we haven’t seen? That small-town wrestling movie…what’s it called? Somebody told me it’s really good. You didn’t read the reviews? Paul Giamatti? You know and I know critics who do unqualified cartwheels over Meek’s Cutoff can’t be trusted, but they all really liked this thing. You don’t wanna…? Sure? ‘Cause I really don’t wanna see Arthur.” 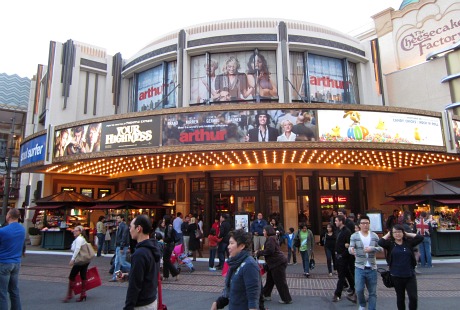 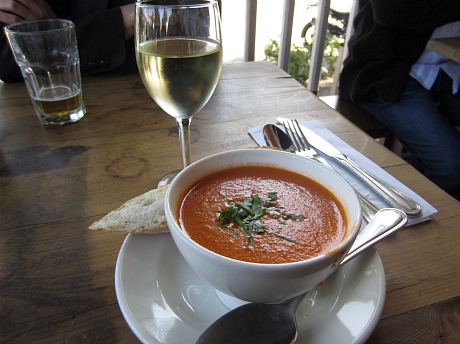 Yesterday’s Sidney Lumet tribute by Salon‘s Matt Zoller Seitz was the most perceptive and best written of the nine or ten I’ve read so far. Lumet’s style of directing “has a subliminal effect on what we’re feeling as we sit there in the dark,” he said. “He thought about the story from the inside out, letting text and performance dictate visuals, rather than superimposing meaning.

“It’s not the only valid way to make a movie, but it’s demanding and illuminating, and there are not as many rewards in it as there are in the shoot-the-camera-out-of-a-cannon type of directorial pyrotechnics.

“That’s why, even though Lumet’s films sometime became hits and won awards, they never gained much currency with auteurist critics. [But] just because you don’t instantly notice what directors are doing doesn’t mean they aren’t doing anything.”

I doesn’t matter if I’m the last guy on the web to post this. Somebody has to be.

Why is it even slightly interesting to anyone that Michael Shannon has been cast as General Zod in Zach Snyder ‘s Man of Steel, the Warner Bros. Superman flick? Decisions like this are about the same rote, knee-jerk thinking that Hollywood always buys into.

As I said three months ago, if an actor is gifted and cool but doesn’t look like Justin Timberlake or Nic Cage he gets tagged and bagged as a villain, a creep or an obsessive.

And Shannon will probably be stuck in that jail for life. (Unless he lands a good part in an interesting play that opens in London or New York.) Because whatever Shannon might have to offer that doesn’t fit into standard movie-bad-guy behavior is going to really be ignored with a passion from here on.

I go narcoleptic when Shannon plays a wacko. I’d like to see him play a nice-guy dad or a heroic big-city detective or a brilliant CIA operative based in the Middle East.

“Some actors are better at playing heavies, agreed, and we’ve all heard time and again that it’s a lot more enjoyable to play darker personalities than dutiful good guys,” I wrote on 1.11. “But the world is full of gentle, brilliant and compassionate men and women who don’t look like conventional movie stars. It would be nice if American mainstream films could acknowledge this every so often.”

So it’s Shannon as Zod, Henry Cavill as Superman/Clark Kent, Diane Lane and Kevin Costner as Clark Kent’s parents, and Amy Adams as Lois Lane. This movie has such an impressive bullshit potential. You know what it’s going to be with Snyder calling the shots. I have little faith that producer Chris Nolan is going to step in and keep Snyder from indulging in his usual ComicCon CG-whore routine.

I have this tendency to space out occasionally, especially if I’m tired, and leave valuables like credit cards and phones and shopping bags in stores and cafes. (I used to be much worse when I was in my teens.) Three days ago I left my black leather bag with my 13″ Macbook Pro inside it at LASC, a stylish gay-man’s clothing store on Santa Monica Blvd.

When I called the next day they said they had it somewhere in the back — relief! — but when I showed up an hour later the bag had disappeared. It was apparently nipped by a customer or an employee. The good news is that LASC has theft insurance so I’ll be covered in a month or two.

In any case I had to buy another Macbook Pro yesterday, a slightly improved unit compared to the one I purchased last May. One of the differences is that Apple is no longer offering their “spaces” app (which allows you to separate and organize various websites into four separate squares) as a stand-alone whatsit that can be put into the dock and opened at a second’s notice. Now they have it embedded into the top-right tool bar, and the only dependable way to expand and use it is to hit Function + f1 — a thumb-forefinger maneuver.

There’s also a new command that brings up the “spaces” boxes if I push the cursor into the top-right corner of the screen, but it only works when it feels like it.

I love it when developers improve perfectly good software so it isn’t as user-friendly as before. Now I’m looking around for third-party software that (a) offers the exact same 2010 “spaces” functionality that I’m used to and (b) can be dropped into the dock.