Indiewire‘s Peter Knegt has reported that Jodie Foster’s The Beaver “opened in 22 theaters across North America Friday night to dismal box office returns. A kind of half-dramedy, half downer-with-a-touchy-feely-undercurrent piece (i.e., Mel Gibson as a clinically depressed toy company CEO who finds solace through a beaver hand puppet), the film grossed an estimated $30,000 on its first night of release, averaging just $1,364. That should amount to roughly $100,000 over the weekend for distributor Summit Entertainment, with an average of $4,500.” 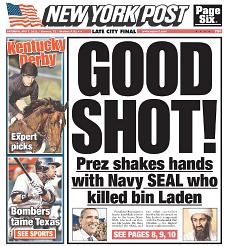 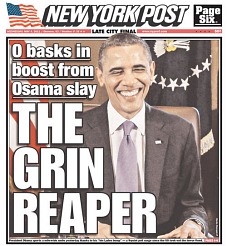 Michael Corleone: “My father’s no different than any other powerful man. Any man who’s responsible for other people, like a Senator or a President.” Kay: “Michael, do you know how naive you sound?” Michael: “Why?” Kay: “Senators and Presidents don’t have men killed.”

It’s just been announced that Iranian filmmakers Jafar Panahi and Mohammad Rasoulof, currently facing a sentence of six years in prison and a 20-year employment ban because their work offended the Tehran mullahs, are coming to the 2011 Cannes Film Festival with two politically-charged autobiographical films. Update: The festival press release stated the above by any rational understanding of the English language, but others have deduced that festival staffers didn’t mean to suggest that Panahi and Rasoulof would physically attend the festival.

Rasoulof’s Goodbye, which will screen on Friday, 5.13 as an official Un Certain Regard selection, is about “a young lawyer in Tehran in search of a visa to leave the country, which is what Rasoulof did during the winter of 2010/2011,” says the release. Panah’s This Is Not A Film, showing on Friday, 5.20, “tells how Panahi waited for the verdict of his court appeal [for months],” the release continues. “Through the depiction of a day in his life, Panahi and Mojtaba Mirtahmasb (a documentary filmmaker and former assistant director) offer us an overview of the current situation of Iranian cinema.”

Said it before, saying it again: Panahi and Rasoulof and their families need to lam it to Paris. Screw the mullahs. Life is short.

I’ve watched this Ed Schultz “Lean Forward” MSNBC spot six or seven times now. How it is, all right. Who could/would dispute? The basic truth is that the right supports the economic disparity and corporate favoritism in the name of free-market, laissez-faire determinism. Insane.

Last night Jett and I caught the Ben Stiller-Edie Falco-Jennifer Jason Leigh B’way revival of John Guare‘s The House of Blue Leaves. Okay, I was a bit wary after N.Y. Times critic Ben Brantley roughed it up. Brantley was being a bit of a piss-head, it turns out. Call me an easy lay (I’d never seen Guare’s play until last night) but I was pleased, aroused…no beefs. The performances (Stiller and Falco’s especially), staging & set design, theme and general pizazz are penetrating and exceptional. 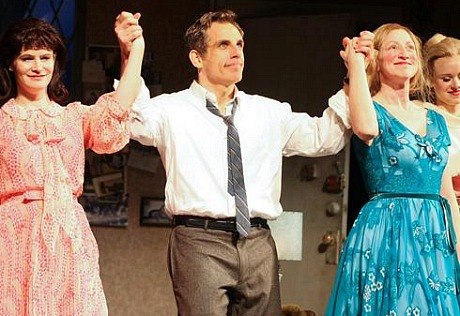 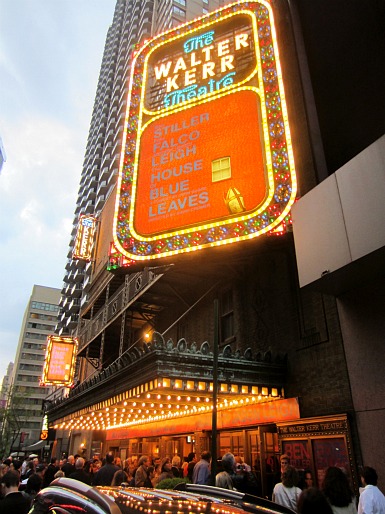 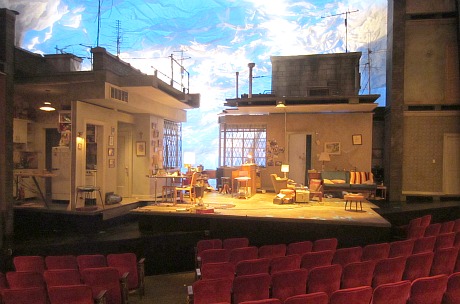 The story unfolds in a dinghy Queens apartment during Pope John’s 1965 visit (which Roman Polanski‘s Rosemary’s Baby also bounces off — I kept thinking about Guy and Rosemary Woodhouse going through their troubles at the same time). Stiller is Artie Shaughnessy, a profoundly untalented songwriter with a day job at a zoo, living with his schizophrenic spouse Bananas (Falco), planning an escape to Los Angeles with girlfriend Bunny (Leigh). Hooboy, do things not go as planned!