On May 1st the New York Post‘s Ann Karni reported that the Freedom Tower (i.e., the main tower at 1 World Trade Center) “has reached 64 stories and is growing by a story a week.” So it’s now at 65 stories, I gather, since today is May 8th. Karni wrote that the Ground Zero skyscraper is now visible “from the New Jersey Turnpike, the West Side Highway, the Brooklyn Bridge and the Staten Island Ferry.” 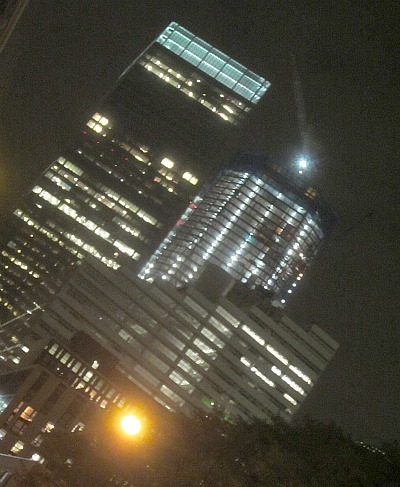 Freeedom Tower is the building to the right of the taller, squared-off one, and behind the one in front. Pic taken on Sunday, 9:05 pm from the corner of Greenwich Street and Duane Street.
May 8, 2011 6:52 pmby Jeffrey Wells
36 Comments
Head-Scratcher 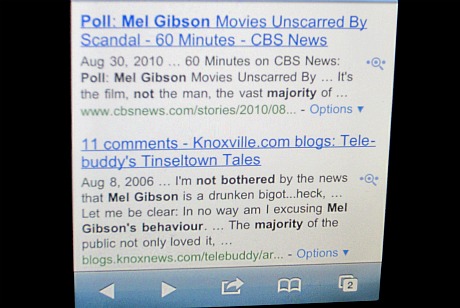 I think we all understand that Bad Santa was at best a minor influence upon the making of Bad Teacher (Sony, 6.24). I think it happened mainly due to innumerable reports of sexual indiscretion on the part of God-knows-how-many-TILFS-and-MILFs in high schools over the past few years. Fate dealt me a bad hand, I feel, by not arranging for one of these women to teach one of my seventh, eighth or ninth-grade classes, and that’s probably the main reason why I want to see this Cameron Diaz comedy. 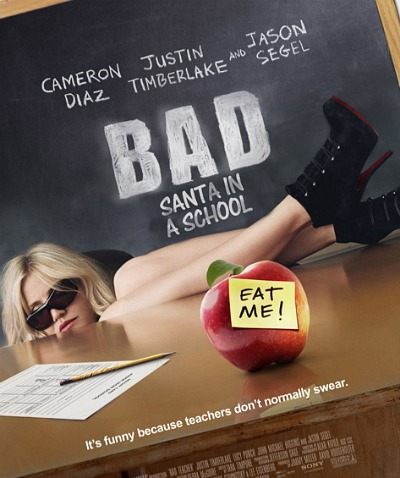 Not to sound a disrespectful note but on a certain level this trailer for Michael Winterbottom‘s The Trip (IFC Films, theatres 6.10, On Demand 6.22) is a greater achievement than the film itself, which is mildly funny and actually rather good in a steady and confident and unforced way. But the trailer is funnier…sorry.

Rob Brydon‘s Woody Allen is perfect save for the fact he doesn’t sound like him. “I want a room with a view…I want to see a tree.”

An HE reader is looking for copies of Memphis (Paul Greengrass‘s draft), The Girl with the Dragon Tattoo, Lord of Salem, Triple Frontier, Rock of Ages, Dark Shadows, Aryan Papers, Wartime Lies, 20000 Leagues Under the Sea (Scott Burns), The Reincarnation of Peter Proud, Lincoln (Tony Kushner draft only), The Talking Cure (a.k.a A Dangerous Method), Ant-Man (Edgar Wright) and War Horse. So am I. Anyone?

I had a Chrissie Hynde/Pretenders/”My City Was Gone” moment last night when I caught a ghastly, bad-LSD-trip performance of Christopher Durang‘s Beyond Therapy at the “renovated” Westport Country Playhouse. The awfulness of the play induced only brief nausea spasms and isn’t worth ripping into at length, but the destruction and erasure of the old Playhouse is permanent and sickening — an act of high aesthetic criminality.

The “real” Playhouse began as a tanning factory in the early 1800s. It was transformed into a community theatre in 1930 or ’31. When I first knew it in the mid ’70s the original theatre was full of ghosts. Hundreds of serious, world-class actors had performed there for several decades, and the place had historical aroma and a certain creaky-rickety charm. The musty scent alone was enough to transport and turn on. It was “out of the past” and then some, recognized as an historic building by the State of Connecticut, etc.

And then came the nouveau riche pod-people renovation of ’03 to ’05, which cost in the neighborhood of $30 million. And in one fell swoop everything that was old and storied and musty and cherished about the place was destroyed.

The last time I checked the definition of “renovate” meant “to restore to good condition …as if new again; repair, reinvigorate, revive.” As far as I can tell the six-year-old Body Snatchers renovation was an act of obliteration. Nearly every last stick of original timber was taken away and replaced with an iron structure and freshly cut wood and coats of paint and varnish.

There might be a few remnants left over from the old Playhouse, but only on a token or fragmentary basis. (A portion of the old barn’s exterior?) Because for all practical purposes the atmosphere of the past has been completely raped and removed.

Imagine a developer tearing down an 18th Century colonial that General Cornwallis stayed in during the Revolutionary War and building a brand-new DisneyWorld replica with a few additions (state-of-the-art gym, indoor pool, a multi-media entertainment room, a six-car garage). That’s more or less what’s been done to the Westport Country Playhouse.

The adjacent Players Tavern, which had plenty of history in and of itself, has been destroyed also and replaced with the kind of tastefully soulless restaurant you might find in any upscale Midwestern city. 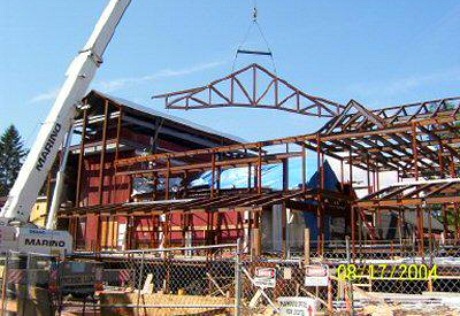 Imagine what an enterprising developer could do for the Roman Collisseum. Imagine the potential revenue from installing new cushioned seats and fixing up the ancient floor and staging all-new 21st Century gladiator battles, etc.

I worked at the Westport Country Playhouse Cinema, an off-season enterprise run by Brian Fox and Fred Kraushar, from late ’76 through early ’78. I was a part-time usher, audience-greeter, clean-up guy, talent chauffeur (I once drove Andrew Sarris up from Manhattan) and a writer of program notes about whatever movie was playing. (The format of my assessments was directly copied from the program notes that were handed out at the Leo S. Bing theatre at the Los Angeles County Museum of Art.)

In ’76 I lived in a renovated chicken coop on a 50-acre spread owned by Linda Black of Wilton, CT. From the spring of ’77 to early ’78 I lived in a home off South Compo Road that I shared with Fox. I don’t mean to sound the wrong note, but this was the greatest nookie period of my life.

I’ve gotten off the track here. Oh, yes, the play….

The Westport Country Playhouse’s presentation of Beyond Therapy, an extremely broad and hackneyed relationship farce, was awful for me. It’s a late ’70s topical period piece that began as a 1980 off-Broadway show. It was written from the vantage point of a gay man who’d dealt with his share of homophobia and had a lot of anger and frustration and payback loathing to spread around.

The play is labored, “square”, overwrought, deeply unfunny, grotesque and rankly dated in the worst way imaginable. I was comforted to learn that the original Broadway production closed after 21 performances.

All due respect and compassion, but director David Kennedy should be hunted down with a deer rifle. For anyone with a smidgen of taste, his staging (and particularly his choice of scene-transition music) amounts to an imitation of a dinner-theatre production in a suburb of Dubuque or St. Louis or Jacksonville or Sacramento.

Am I over-reacting? No. I know what dreadful theatre is and I experienced it last night. Then again N.Y. Times critic Anita Gates gave it a pass in her 5.7 review. Go figure. 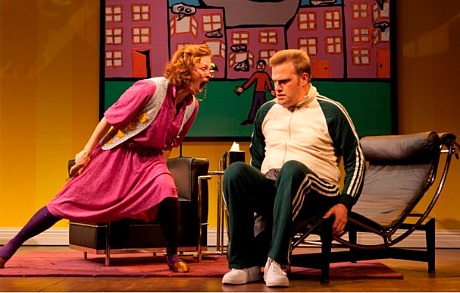