I’m too whipped to write a review, but 20 minutes ago I tweeted the following: “X-Men: First Class is the best superhero origin flick ever, arguably the best X-Men flick of all. Tight, lucid, gripping every step of the way. Director Matthew Vaughan exonerated for past sins. Magneto may be Michael Fassbender‘s best performance ever (or perhaps 2nd to his Hunger perf…I haven’t thought it through). I liked 1st half more than 2nd half, but I was never bored or irritated. It really works — every element fits together like the parts in a good Swiss watch.”

I saw this trailer at the Pathe Wepler last weekend in Paris, just before submitting to “The Hangover, Part II. Rise of the Planet of the Apes opens on August 5th.

After missing screenings of Beginners (Focus Features, 6.3) for nearly two months I’ll finally get to see it tonight at a 7:30 pm screening. Partly, I mean, because I also have to attend a 9 pm showing of X-Men: First Class (20th Century Fox, 6.3). A shame to duck out of any film, but especially one that’s said to be better-than-okay. (Ditto X-Men, I’m hearing.) I didn’t arrange the schedules. I had to blow off tonight’s Super 8 IMAX screening in Burbank to do this. 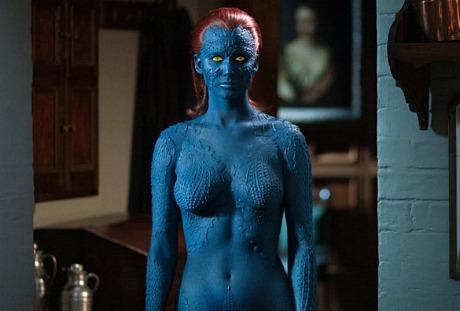 For whatever reason Fox publicity labored mightily to keep this kind of straight-on photo of Jennifer Lawrence-as-Mystique out of circulation until two or three days ago.
June 2, 2011 2:27 pmby Jeffrey Wells
28 Comments
This?

My very first thought was “Jessica Biel‘s working on making her lashes just so for a short little guy in a suit?” If I were Biel I wouldn’t give a damn how attractive I am to a guy like Pharrell. I’d enjoy his company or his music or shoot the shit with him. But you’re thinking “him?…he‘s lighting her fire?” The director is Darren Aronofsky.

After seeing Cindy Meehl‘s Buck at South by Southwest, I wrote the following: “At first I had a notion that Buck (IFCFilms, 6.17) was just a nice emotional atmosphere film that didn’t have any wider echoes or implications, but I gradually began to see it’s as much about healing humans as horses.

“As it reveals more and more about Buck Brannaman‘s work and personal life, Buck passes along lessons about getting past childhood trauma and correcting parental errors and ways to heal…all that good stuff. The fact that youngish horses are the recipients of said therapy doesn’t obscure the fact that many if not most of Brannaman’s teachings apply to troubled kids and teens, and also for that matter (in theory at least) troubled adults.

“Feeling unloved and ganged-up-upon and pressured isn’t a good thing for any man or beast. We all just need to chill and feel safe and unthreatened, and to not be so afraid of making a mistake that we can’t move. What I got from the film is that if all afraid, angry and unhappy people had someone like Brannaman to calm them down and steer them in healthier, more positive directions, the world would be a much calmer, wiser and better place.”

I received a screener of Bill Haney‘s The Last Mountain, another evil corporates vs. angry locals doc, just before leaving for Cannes, but I didn’t get to it. I don’t know why I’m not disciplined when it comes to screeners but for some reason I’m not. Only when a movie’s release date is breathing down my neck do I pay attention. It opens in New York this Friday and in Los Angeles on 6.15. 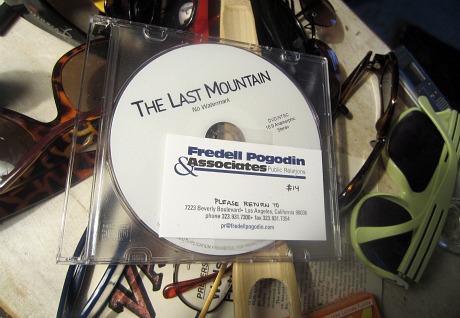 Lewis Beale feels that The Last Mountain “is scarier than any Saw, Alien or Friday the 13th film ever made. It’s a documentary about mountaintop coal removal in West Virginia, starring a group of locals whose environment is slowly turning into toxic sludge and an energy company whose methods are so predatory, they make Wall Street bankers look like acolytes of Mother Teresa.

The doc is “essentially about the fight to stop Massey Energy, a company with more than 60,000 environmental violations from 2000 to 2006, from blasting the top off of Coal River Mountain in a rural area of West Virginia. The fight pits one of America’s largest coal companies, the industry lobbyists it has helped install inside the EPA and a pro-coal governor against a group of local activists with little money and very little political clout.

“The locals see their beautiful, mountainous countryside being turned into a moonscape, and the statistical information the film continually flashes on the screen paints a portrait of a true horror show.

“After seeing Bill Haney’s film, it will be hard for any American to justify the environmental destruction caused by our insatiable need for coal, even though coal-burning power plants provide half of the electricity used in the U.S. One-third of all that coal comes from Appalachia, although the biggest operations in the U.S. are surface mines in Wyoming.

“‘If someone tried to blow up a mountain in Utah or Colorado, they’d be put in jail. Why is that allowed in West Virginia?’ asks environmental activist Robert F. Kennedy, Jr., who figures prominently in the film. ‘It’s because the public does not know it’s happening,’ he continues. ‘Investigative journalism has disappeared in this country. Americans are the best entertained and least informed people on the planet. If the people really knew, they wouldn’t tolerate it.'”

I personally know four women of a certain age — all movie-lovers, all with a fair amount of living and life-wisdom under their belts, three with elegant educations and top-level jobs — who know nothing about the plot of Luis Bunuel‘s The Exterminating Angel (’62). Is that a crime? No. But one unfortunate result is that these four women didn’t get the joke about Bunuel and this film told by Owen Wilson in Woody Allen‘s Midnight in Paris. It sailed right over their heads and out into space.

Now I’m getting the idea that perhaps this joke (which I’m not going to explain) is being missed by thousands. How many HE readers got it or missed it? How many of you know of people who didn’t get it due to never having seen or even read about The Exterminating Angel?

When I first saw Midnight in Cannes I mentioned that some of the jokes iwon’t be fully enjoyed unless the audience has at least a half-assed understanding of who the Lost Generation expats of 1920s Paris were — i.e., Bunuel, Ernest Hemingway, Man Ray, Pablo Picasso, Gertrude Stein, Salvador Dali, Scott and Zelda Fitzgerald, T.S. Eliot, etc. — and what their work was about. “You need to be at least semi-educated,” I wrote. “As we all know that leaves out a significant chunk of 2011 moviegoers so we’ll see where that goes.”

Nobody outside the pseudo-hip film-fanatic fraternity cares about seeing Quentin Tarantino‘s Django Unchained…no one. Will Smith as a slave? Leonardo DiCaprio as a snorting, squinting badass? Another ’70s grindhouse exercise, another movie-in-quotes, an hommage to the Sergio Leone westerns (shoot it in Tabernas!) and Jodorowsky’s El Topo, blah, blah. Western archetypes covered in sweat and stink and crud and grease. If Christoph Waltz winds up costarring it’ll be the ultimate self-referential circle-jerk. 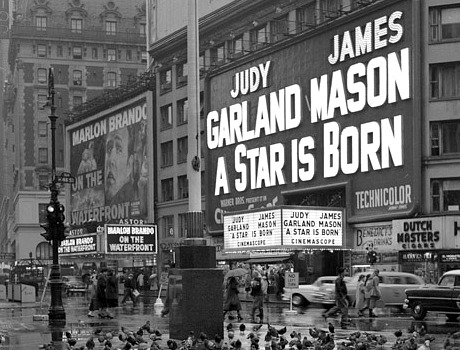 Taken sometime in October 1954, judging by the overcoats but also because George Cukor’s A Star Is Born opened at the Victoria on 9.28.54. On The Waterfront opened on in late July of that year, so it had been playing a solid two months and then some. 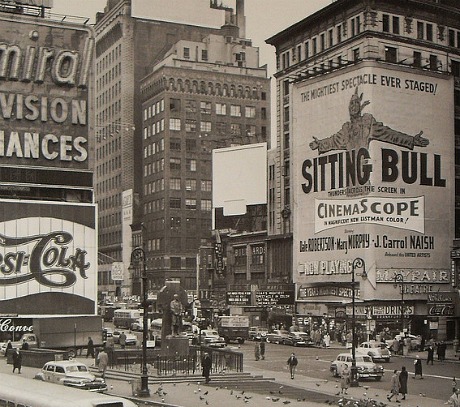 50 or 60 years from now, a considerable portion of the films out now will be as completely forgotten as Sitting Bull, a 1954 B western starring Dale Robertson and J. Carroll Naish. 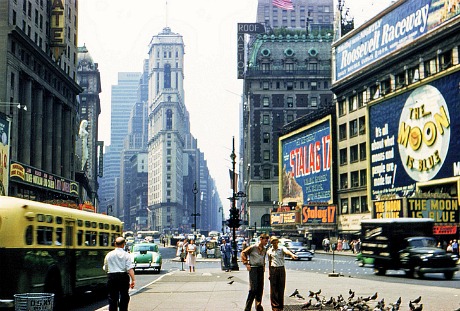 This is a cleaner, crisper version of a photo that I posted a couple of years ago, originally copied from some Flickr guy’s library. (I tried to do the right thing but he didn’t respond.)
June 2, 2011 6:43 amby Jeffrey Wells