I’m watching the new Bluray of John Huston‘s The Man Who Would Be King (’75), and marvelling…where do I start? At Oswald Morris‘s vibrant, immensely comforting photography and how each and every shot seems so perfectly, naturally framed. And how young Christopher Plummer, who plays a moustachioed Rudyard Kipling, looks compared to his chuckling, white-haired self in Beginners. That’ll do for now. I’ve got a screening to catch. 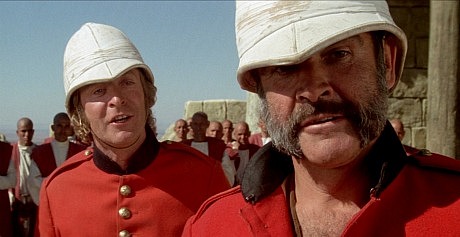 I was going to post a longish riff on X-Men: First Class as a follow-up to last night’s truncated rave, but it’s 2pm and I have to get ready for the 4pm IMAX screening of Super 8. Tomorrow morning then. Nobody is obliged to like anything if they aren’t receptive, but I’m nonetheless startled by how completely immune L.A. Weekly/Village Voice critic Karina Longworth is to this obviously together and tightly written film.

I knew five minutes into Mike Mills‘ Beginners (Focus Features, opening today) that it was more than just a slightly cutesy-poo “dealing with my newly declared gay dad who has a non-verbal talking dog” movie that the trailers have been selling. Marketing execs! If there’s any way they can persuade you that a rich and well-sauced meal is a candy bar, they will.

And they succeeded! Before seeing Beginners they had me thinking that a surprisingly mature, time-shifting, patchwork-quilt film with a gently probing nature and off-kilter moods would be a banal straightforward thing — a sitcom. Thanks, guys. What would the movie business be without you?

Okay, Beginners is a little twee anyway despite being all those things. But it really surprised me, pleasantly, by having so much more up its sleeve than just wanting to gently charm and cajole. I really hate movies that try to offer a gentle whimsical study about nice people being likable and caring, etc. Beginners, thank fortune, isn’t one of these. Yes, it can seem a bit too poised and even calculatingly kind-hearted from time to time, but more often that not it’s closer to affecting than affected.

Based on Mills’ own story and focusing on his stand-in, a moderately youngish illustrator type (Ewan McGregor), Beginners is in no hurry to grab you. It weaves its way into things, taking a kind of shuffling sideways route. It isn’t so much about a son dealing with a recently “out” gay dad (Christopher Plummer ) who’s half-fumbling his way into a new realm after the death of his wife as it is about McGregor’s relationship with a wonderfully relaxed and self-aware new girlfriend (Melanie Laurent).

Or it was, rather, at the point I had to leave, which was about the 60-minute mark. I had to catch a 9 pm showing of X-Men: First Class. But I’ll be seeing the second half in Santa Barbara tomorrow afternoon, and then an after-party for Mills at the home of Roger Durling, head of the Santa Barbara Film Festival.

But I know quality goods when I run into them.

John Edwards‘ grand jury indictment today for conspiracy and illegal campaign contributions and generally behaving like a titanic lying asshole, all to cover up his Rielle Hunter pregnancy-hideaway scheme of ’07 and ’08, is, of course, manna from heaven for Aaron Sorkin‘s The Politician.

Now Sorkin has his arc — a ghastly and tragic fall from grace for a one-time golden boy of Democratic politics. One strategic-screenwriting response on Sorkin’s part, as TheWrap‘s Brent Lang suggested earlier today, is that he has now a bookend framing device. Or perhaps a factual narrative through-line to cut to and away from. He can’t just end his film with a title-card epilogue that says Edwards was indicted, etc. That would be lazy.

The indictment news is so effing great. I’ve wanted to see Edwards suffer for a long time, and this feels like some kind of beautiful shiatsu massage underneath a waterfall. I want Edwards to suffer and cry and moan and grovel and bleed, and to be spat upon by people in parking lots.

I think we’ve got Richard Phillips figured out for the time being. He buddies up with somewhat damaged or degraded hotties struggling on the fringe of respectability and looking to refine their image by appearing in artified, Antonioni-esque short films that are sure to get a fair amount of internet play. Phillips knows how to shoot ennui-laden mood photography so he steps in, gets it…bang.

The difference is that Lindsay Lohan can act while Sasha Grey has so far only shown that she can (a) look solemn and pouty for Steven Soderbergh and (b) feign exhilaration in the porn-lube realm.

Today doesn’t mark any special anniversary for James Whale‘s Frankenstein. The 80th anniversary of its commercial debut will happen on 11.21.11. I just happened to come across this faded newspaper ad for its debut at the Mayfair (renamed the DeMille in the late ’50s) on Broadway and 47th. 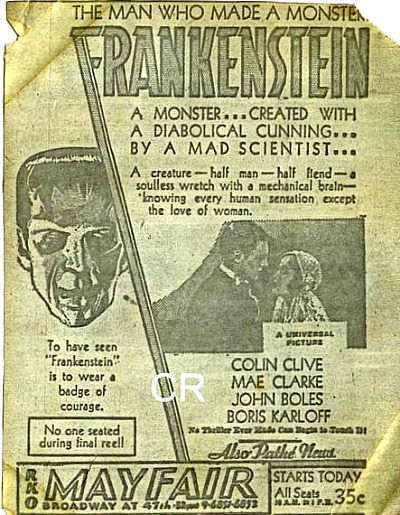 For whatever reason I’d never read or understood until today that poor Colin Clive died of alcohol-related tuberculosis in 1937. He was only 37 years old, for Chrissake, so he was only 30 or 31 when he played Dr. Henry Frankenstein in Whale’s film A drinking problem would partly explain why Clive looks no younger than 40 and could even be 45 in Frankenstein.