This scene is not taken from the new Barry Lyndon Bluray; it looks considerably better than this. And five or six interior candlelit scenes have values that haven’t been seen since Stanley Kubrick‘s classic opened theatrically some 36 years ago. And for the first time in my life I’ve realized that the man walking outdoors with Barry’s mother near the beginning isn’t Ryan O’Neal, but an actor playing a suitor. The Bluray finally allowed me to see his features that clearly.

But it’s wrong, wrong, terribly wrong to present this film at 1.78 to 1. If I had my way there would be a formal inquest at which Leon Vitali and “the Kubrick estate” would submit to questions under oath from a prosecutor, and they would be asked how, exactly, it could have possibly been Kubrick’s intention that Barry Lyndon be shown at this aspect ratio (or at 1.77) when it didn’t exist in 1975, and in fact didn’t come into being until high-def TV screens became popular in the early aughts. Some day this wrong will be righted.

“And may the first child be a masculine child…” Not only can bloodless vampires achieve a nonsensical state of rock-hard tumescence; they can also produce crystalline ejaculate that can merge with a fertile human egg to produce “results,” as it were. Ladies and gentlemen, we give you…Little Edward?

X-Men: First Class will pull down about $56 million this weekend — fine. But that’s only a little bit more than Bryan Singer‘s first X-Men, which cost $75 million to make compared to the current version’s $160 million. Plus it didn’t perform as well as X2 or X-Men Origins: Wolverine, and it made a lot less than the most critically loathed of all the X-Men films, Brett Ratner‘s X-Men: The Last Stand, which earned a first-weekend gross of $102,750,665.

26 Comments
No Turning Back 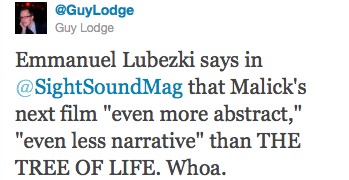 This is a fitting parody of an obviously bright and perceptive but notoriously crabby, internet-hating critic. Not as funny as FakeArmond, which has a jauntier put-on attitude, but worthy of a man called a “sourpuss supreme” by Vanity Fair‘s James Wolcott.

“The problem with the old guard [of film critics] is they want to talk about the actual film,” VF talkbacker cowboyandthemonk.com wrote on 6.30.10. “There’s hardly much point in critiquing an art form that has already eaten itself. There was once a time when movies reflected the collective conscious and then served it back to audiences in order to stretch minds. That was the crux of entertainment — it informed and illuminated brains. Now, studio executives produce movies to feed collective baby-food appetites so devoid of nutrition that nothing grows. Digestion, deconstruction or analysis is not why people seek out this art any longer. In order to awaken a mind to the joy of anti-monarchist thinking, they have to still possess the delusion that being intelligent is an improvement on living. Good luck with that [nowadays].”

Yesterday afternoon’s viewing of the second half of Mike Mills‘ Beginners (Focus Features, now playing) was just as nourishing as my Thursday night viewing of the first 60 minutes. So I’m still in the tank for this heartwarming, patchwork-quilt relationship film — no Sunday morning quibbles or after-thoughts. 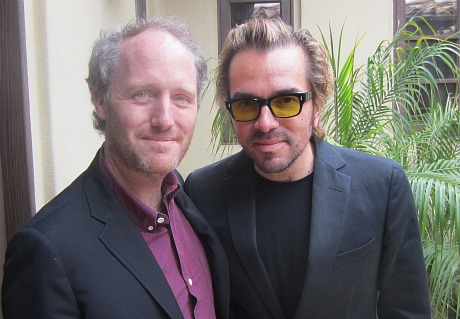 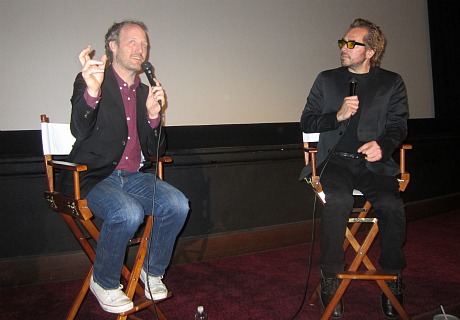 I caught Beginners late yesterday morning at Santa Barbara’s Riviera theatre. And then sat through a q & a between Mills and Santa Barbara Film Festival chief Roger Durling. And then attended a party for Mills at Durling’s home in Goleta.

I can’t see how Beginners‘ costar Christopher Plummer won’t end up as one of the five nominees for 2011’s Best Supporting Actor. He certainly deserves to be, no matter who else comes along. Plummer taps into an array of late-life emotions but primarily (and very convincingly) joy of living and acceptance of the present and past. He should have won for his Mike Wallace portrayal in The Insider so he’s due.

My only problem was not being able to understand some of Melanie Laurent ‘s dialogue in the second half, what with her French accent and the not-great sound system at the Riviera. But there was pleasure all the same in realizing how many moods and colors she has in her actor’s kit bag. Quentin Tarantino got exactly two colors from Laurent in Inglourious Basterds — terror and a silent, steely-eyed commitment to getting revenge. Fascinating.

11 Comments
"He Was Stupid, I Was Lucky"

In this Godather II screen-test clip, Sam Fuller‘s Hyman Roth is a bit too affable, too menschy…no scent of menace or perversity. He could be the manager of a minor-league baseball team. I’ve watched two or three big-name actors run through lines and try stuff out on movie sets prior to shooting, and I was reminded each time that most readings aren’t anything to write home about.

In other words, even the best actors aren’t instant “get it right the first time” geniuses. Like anyone else they need to find their way through trial and error and refinement, etc.

A trailer for a mopey-griefy 2012 Valentine’s Day movie? That’s almost nine months from now. Reminder: Rachel McAdams has always looked better with nut-brown hair, but super-dark or black hair (which she has The Vow) doesn’t work.