The War Horse teaser has all the well-known earmarks of a Steven Spielberg film, you bet. It totally reeks of his paintbox. I’m still holding out hope that the film, due in late December, will primarily be a horse-POV drama and secondarily about the people who love and use and exploit him. (Teaser initially posted by the Film Stage.)

The only dialogue in the teaser is spoken by A Prophet‘s Niels Arestrup.

This, I feel, is one of David Poland‘s best swipes at mainstream entertainment writer-reporters, particularly the L.A. Times‘ entertainment staffers who see themselves as providing a higher grade of professional-class writing-reporting than the online blogging community. 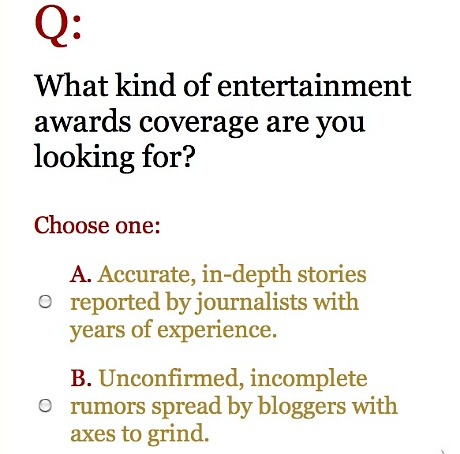 “It just goes to show you, surveys are skewed by the questions as much as the answers,” Poland comments. “The above is an ad for awards advertisers from the LA Times. I would rephrase: What kind of entertainment awards coverage are you looking for? (a) The same old stale stuff, written by angry, jaded employees of a bankrupt corporation who don’t ask challenging questions, but sometimes do trend pieces based on off-the-cuff poorly considered notions someone spit up like a hairball over coffee? Or (b) Thoughtful, provocative ideas that are not steeped in the need to cover massive overhead by selling millions of dollars in ads to the studios by writers who are not outnumbered by the ad sales team?”

“Live-action 3-D has been, at least since Avatar, a briar patch for filmmakers and a headache for audiences,” says N.Y. Times critic A.O. Scott. But Michael Bay‘s Transformers 3: Dark of the Moon, he says, “is one of the few recent 3-D movies that justify the upcharge. Mr. Bay clearly enjoys playing with the format, which is also to say that he takes it seriously. A lot of glass and metal comes flying at your head, and you feel surrounded, plunged into a universe governed by new and strange laws of physics.

“Nothing you see makes any sense at all, but the sensations are undeniable, and kind of fun in their vertiginous, supercaffeinated way.”

Larry Crowne (Universal, 7.1) is a mild-mannered, lightweight, reality-skirting, cruise-along feel-good movie about a mild-mannered, trying-to-always-feel-good nice guy in his early 50s (Tom Hanks) who loses his job at Walmart…UMart, I mean, and has to find ways to live within new economic limits without getting angry or depressed or turning to drink or doing anything unattractive or unlikable, which, as we all know, is way outside Hanks’ wheelhouse. 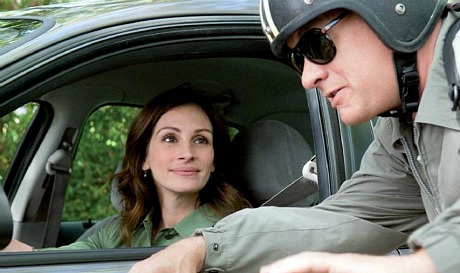 So Mr. Crowne buys a scooter and decides to take some classes at a small community college and kinda gets going with a couple of women in a very mild sense, one a fellow student (Gugu Mbatha-Raw) and the other his public-speaking teacher (Julia Roberts), and starts to wear darker, cooler-looking threads and gets a nice hip haircut and regrettably sells his home and generally avoids anything that even remotely resembles that gnarly little bugger called “drama.”

Larry Crowne, in short, is about butter not melting in anyone’s mouth. Not in Hanks’, Roberts’ or Mbataha-Raw’s mouth…well, okay, maybe in Bryan Cranston‘s mouth because he’s playing another bothered guy (i.e, Roberts’ no-account husband) who has, in this instance, alcohol and big-boob issues. Otherwise the concept of butter melting under any circumstance is never considered in this thing, and I mean not even as a theory.

Larry Crowne is about being open and good-natured and saying “sure, I’ll try it” and “why not?’ and “today is the first day of the rest of my life” and all that. It almost gets there from time to time, but most of us go to a film like this expecting to absorb a kind of Jerry Maguire-like vibe, and this movie doesn’t want to know about even trying to be a Jerry Maguire for 45-and-olders. It doesn’t begin to compete with the emotionality of that 1996 Cameron Crowe film.

Larry Crowne is also self-portraiture. It’s a portrait of a moneyed, honeyed LA culture that doesn’t let anything in that’s bad or difficult or threatening. It’s about the mellow, gentle, agreeable, Playtoney, positive-minded liberal-affluent membrane that Hanks, the film’s star/director/co-writer, and Nia Vardolos, his co-writer, live in along with Hanks’ wife Rita Wilson and his various producers and enablers and all the others who helped Hanks make this little mind-fable flick. 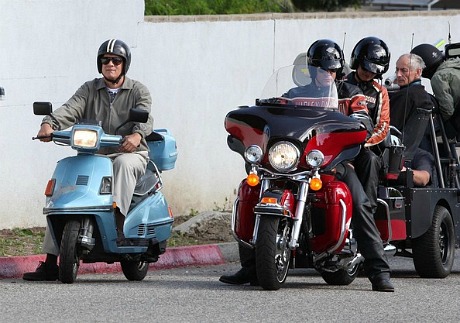 I didn’t believe for a millisecond that in real life a woman as young and beautiful as Gugu Mbatha-Raw — easily the film’s biggest ray of sunlight — would even flirt with a nice schlub like Larry Crowne, an ex-Navy lifer who toiled as a cook for 20 years before getting hired by UMart. Women this hot never go to community colleges and buzz around on scooters with hot-headed Latino boyfriends (Wilmer Valderrama). They roll with the highest level of players — rich guys and artists and photographers and producers and artists and politicians. Mbatha-Raw’s character pays attention to Larry Crowne because Hanks hired her to do this — end of story.

I’ve seen mild-mannered French movies like this. A middle-aged guy suffers a downturn of some kind, and then quietly rebounds and starts putting it all back together and keeps his sense of humor and even gets lucky with a pretty girl or two. It would probably feel a little more charming if it had been made in France and…you know, spoken in French with English subtitles and all that.

I wasn’t twitching in my seat as I watched Larry Crowne. I wasn’t convulsing with pain. I was just like….oh, okay, I get it, fine…Tom Hanks really needs to be liked and likable and that’s why this movie is the way it is.

Larry Crowne is about telling nice lies that aren’t entirely lies because they’re pleasant and friendly and nice to think about, and about showing us a world that doesn’t really exist except in Tom Hanks’ and Nia Vardalos’ head.

There isn’t a single moment in Larry Crowne, which is fundamentally about dealing with a lack of money and security, that delivers the kind of resonance contained in this lyric from Randy Newman‘s “It’s Money That I Love”:

“They say that money / Can’t buy love in this world / But it’ll get you a half-pound of cocaine / And a sixteen-year old girl / And a great big long limousine / On a hot September night / Now that may not be love / But it is all right.”

Not very likable, but obviously reflective of the world out there and the way people really are.

It was the Dean Jones “Disney-ass name” line that did it. Warner Bros. has been screening it here and there but I won’t see it until 7.5 because I’m special. (It opens three days later and can’t be reviewed until 7.6) Directed by Seth Gordon, written by John Francis Daley and Jonathan M. Goldstein with a story by Michael Markowitz, etc.

The whole Tom Hanks, pre-Larry Crowne premiere, scooter-brigade-down-Hollywood-Blvd. thing went out the window yesterday afternoon when I threw my right leg over my scooter and my back dress slacks ripped open at the crotch. A big gaping hole with frayed threads, and it was 6:05 pm — five minutes past the scooter get-together hour and 90 minutes before the start of Larry Crowne, the movie.

It would have been humiliating to schmooze around the Chinese and the after-party with my white briefs on display, so I definitely had to fix this. The smart thing would have been to drive straight home and slip on a new pair of dress pants, only that would have eaten up a good hour, or nearly that. I still had hopes of doing the scooter parade so I went around looking for some black underwear that would make the hole less noticable. Except I couldn’t find the right store with the right briefs. I finally found a pair at a West Hollywood Target (La Brea and Santa Monica Blvd.) and put them on in the rest room. But by the time I got back to the Chinese it was 7:10 pm. So I shined the scooter thing and just parked and went upstairs to the Chinese, all flustered and sweaty but at the same time relieved.

How was the movie…? That’s another riff. I’ll post it in an hour or two.

The Larry Crowne after-party was murder. Way too many bodies, too much noise, a terrible cavern-like atmosphere downstairs, grotesque house music…not a place of peace or fulfillment. The character known as Larry Crowne (i.e., the guy played by Tom Hanks) would have taken one look and turned around, gotten on his scooter and puttered down to the Piano Bar on Selma, which is what I did (along with the lady I was with). That was the way to go, all right. Seriously — the party was against everything that Larry Crowne tried to say and be.

Congratulations to Mark Gill, one of the more candid wise men of the indie production-distribution field, for his new gig as president of Millennium Films. The idea is to “produce and finance five to eight star-driven, wide-release films per year with budgets between $20 and $80 million” as long as Gill can convince his bosses — Avi Lerner, Trevor Short, Boaz Davidson — that this or that project is a good bet.

If you’ve been around for 20 years and are a member of the club, you will always land a job sooner or later.

I’ve been saying for a long while that superhero movies are a pestilence, and that the genre is more or less over in all senses of the term unless the superhero-film-in-question has been directed or produced by Chris Nolan or is named Thor or Iron Man.

I haven’t complained as persistently about mythological-medieval quest movies (wide-eyed innocents, cloaks, horses, shadowy forests) in the Joseph Campbell–J.R.R. Tolkien mode, partly because I feel that Peter Jackson‘s Lord of the Rings trilogy exhausted all that jazz. Whatever juice it might have left will be re-exhausted by Jackson’s two Hobbitt films. The genre is totally over, which is to say more or less relegated to the family trade (which has always been a kind of death).

Tens of thousands of Joe Popcorn-type guys are looking at this trailer right now and going, “Oh, God….another one. Well, I guess I can take the kids.”