I’ve finally figured out what the big deal is with Dolby Surround 7.1, which is not new and has actually been installed in some 2100 theatres. But until tonight I didn’t fully understand what makes this sound system a distinctive development. The ins and outs were discussed this evening by several sound specialists at a Dolby headquarters seminar in San Francisco, but I didn’t really get it until I spoke to Dolby marketing manager Stuart Bowling after it ended.

So here’s the shot in layman’s terms. Dolby Surround 7.1 basically delivers super-clear, highly immersive sound from four discreet sound “zones” — front, left, right and rear. But that’s what Dolby 5.1 delivered, right? No, there’s a difference. To really hear all four channels with Dolby 5.1 you had to sit in a theatre’s “sweet spot,” which is more or less dead center. Dolby 7.1 delivers loud and distinct super-quad sound in almost any section in the theatre. You don’t need to be in a sweet spot to really hear it. So there you go. That’s the thing.**

I asked a question about how everyone at sound seminars always talks about creating big, loud soundtracks for big tentpole blockbusters while I prefer subtle, more human-level sounds, and that the world of aural cinema (including the realm of Dolby Surround 7.1) is far too vast and delicate and all-encompassing for seminars like this one to focus only on the sounds of explosions, blam-blams, face-punchings, rib-punchings, gunfire, helicopter blades, and blah, blah.

There’s a breakfast tomorrow morning from 8 am to 9 am, and then Ioan Allen‘s “The Egg Show” (i.e., some kind of instructive lecture about the history of sound design) and then a lunch and bunch of other seminars and screenings of Legend of the Fist: The Return of Chen Zhen and Dum Maaro Dum and then a cocktail party from 8 pm to 10pm and so on. A very full day.

** Dolby Surround 7.1 is also savorable through Bluray and other non-theatrical modes with the same four-channel discretion. 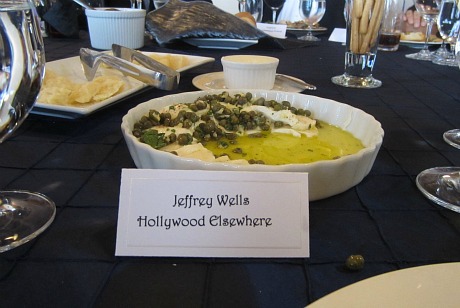 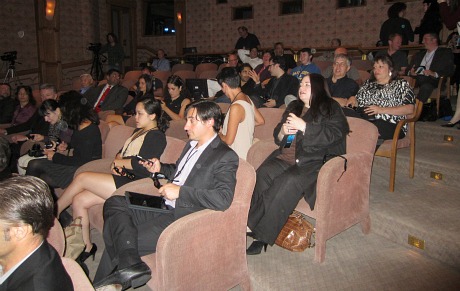 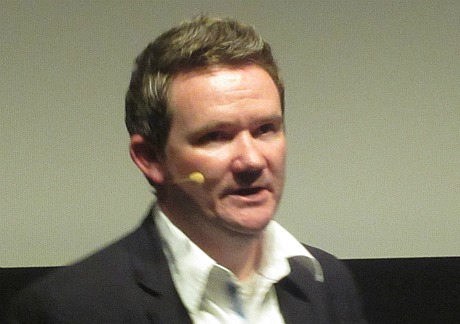 A day or so ago a New York Post photographer captured Al Pacino in one of his Phil Spector guises in the currently-rolling HBO biopic of the now-imprisoned music producer, which David Mamet is directing. Spector wore a big moustache and long, side-combed frizzy hair in the ’70s or early ’80s, so that seems to be the inspiration. Except Al’s hair isn’t frizzy. Get it right, fellas. It’s not hard. 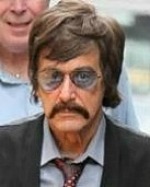 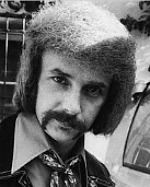 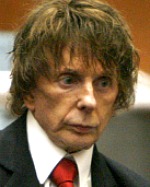 ESPN’s Colin Cowherd recently spoke to Chris Pratt about Bennett Miller’s Moneyball (Columbia, 9.23), in which Pratt costars. Pratt has seen the film and not surprisingly speaks highly of it. But what he says lines up with a review/description that I posted last March. 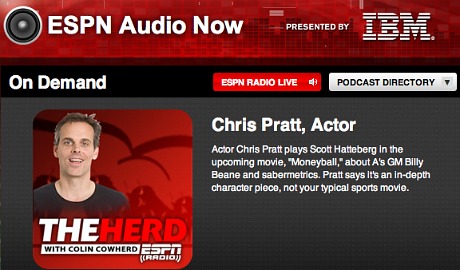 “If you liked the book you’re going to love the movie,” Pratt says. “If you love baseball you’re going to love the movie. It’s different than what you [might] expect from a baseball movie. It’s a great movie [and] really authentic to the sport. But it’s not a ‘baseball movie.’ It’s not Major League or Angels in the Outfield. There are funny moments but it’s not a comedy. It’s an in-depth character piece.”

Thanks to Ty Landis for the heads-up.

Awards Daily‘s Sasha Stone and I recorded Oscar Poker #40 late yesterday afternoon. We discussed the ongoing melodrama of LexG for a little bit and what happens when drinking ends and begins again. (Sasha: “If you’re listening, Lex, put down that beer.”) And Harry Potter and the Deathly Hallows, Part 2. Here’s a non-iTunes, stand-alone link.

The characters, dialogue, pacing, framing and cutting are all standard-issue Spielberg-Jackson stuff, but the digitally reconstituted water is, I feel, exceptional. Especially the crashing waves. H20 is very hard to get right, or so I’m told.

Why am I sensing hyperventilating, hopping-up-and-down excitement levels about Spike Lee signing to direct an Oldboy remake? Sounds like a very good thing, okay, but don’t have a cow about it. The big news will be the casting of the lead.

I’m sorry but the atmosphere inside the once-exclusive and high-toned Beverly Wilshire hotel, which I visited last weekend, is like that of a shopping mall in Riyadh. Like much of Beverly Hills itself, it’s been overrun by nouveau-riche Middle Eastern families. They’re staying there for the social-statement and luxury factors, of course, but their presence, no offense, seems to de-luxurize the place.

It’s quite a different establishment than it was in the ’90s, let alone the ’70s or ’80s. I used to walk into the Beverly Wilshire lobby and say to myself, “Ah, yes…a touch of class. A hushed sense of refinement. Only the best people.” No longer.

My flight to San Francisco and the Dolby Surround 7.1 hoo-hah event leaves from Burbank at 1:45 pm, so that’s it for now. For the first (and probably only) time in my life I’ll be staying at the Mark Hopkins hotel on Nob Hill, which was used as a setting in Bullitt and Kiss Them For Me and (I think) two or three other films. Question to publicist: “Does the Hopkins have a shuttle from SFO to the city? Or should I take a BART train?” Publicist: “Take a cab.”

The last and final Harry Potter film, as I noted in yesterday’s review, concludes the franchise on a note of high absorption and respectability. Good for that. I’m posting this 7.8 assemblage because one of the most affecting moments in Deathly Hallows 2 is a shot of Daniel Radcliffe‘s Harry at age 11 (or whatever he was when the series began production a little more than ten years ago). At the time he seemed nine or ten, at most.

It’s rare for a LQTM type like myself to laugh out loud, but N.Y. Post film critic Kyle Smith‘s 7.8 account of his dealings with Virginia-based publicists Keith Appell and Peter Robbio (whose firm, Creative Response Concepts, is conservative-friendly) provided an exception. Robbio-Appell didn’t allow Smith to attend a press screening of The Undefeated, the pro-Sarah Palin doc, because they’d invited his colleague, Lou Lumenick, and not Smith. Important distinction!

“What’s hilarious about all this is that Lou, who probably had a George McGovern bumper sticker on his lunchbox in college, is far less likely than I, a sensible conservative, am to see the wisdom in a Palin-praising documentary,” Smith wrote.

This is almost two months old but I hadn’t seen it until this morning. Decent, mildly funny, etc. The thought of eating a Snickers bar right now is moderately repugnant. I have a vivid high-school memory of kissing a girl who’d just eaten a Snickers bar (or maybe a Mars bar) and suffering from serious olfactory blowback. Almond Joy, on the other hand, was never a problem.

A mere two days after coming upon a 1958 Los Angeles Times front-page headline informing that Zsa-Zsa Gabor had admitted accepting a $17,000 fur coat from Ramfis Trujillo, the Uday Hussein-like son of the Dominican Republic dictator Rafael Trujillo, I discovered a website showcasing 1950s-era covers of Whisper magazine, apparently a slimier, runtier version of Confidential, and a November 1958 story riffing on Trujillo, Gabor and Kim Novak, whom the dictator’s son also allegedly “knew”, so to speak. 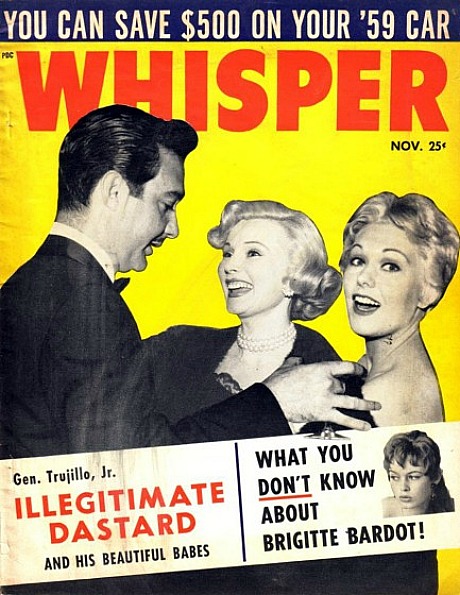 I wasn’t looking for Ramfis Trujillo material, mind. His Zsa-Zsa connection was a secondary headline — a glancing peripheral — alongside the Peter Lawford broken-arm story I satirized the other day. But he turned up again this morning nonetheless.

Shawn Levy‘s biography of Porfirio Rubirosa, “The Last Playboy,” is “filled with Trujillo stories, including a lengthy chapter about the Ramfis/Zsa Zsa/Kim Novak affairs,” Levy informs. Also: a history of Confidential and other magazines takes up most of a chapter.”

“Could one of the most brutal killers in the world openly hobnob with the Hollywood set today? We doubt it. But back in the day, a few rumors of murder only bolstered a man’s adventurous reputation, as proved by this November 1958 Whisper showing Rafael ‘Ramfis’ Trujillo, Jr. charming Zsa Zsa Gabor and Kim Novak. One or both women, you may notice, actually appear courtesy an X-acto knife and glue, but what self-respecting tabloid has time to locate a legit photo when paste-up will do the job almost as well? Trujillo did date and bed both Gabor and Novak in real life, which makes this cover technically accurate, and makes him the second most enviable Dominican jet-setter in history.

“Ramfis Trujillo reportedly gave most women that frisson some find irresistible, but his life wasn’t all starlets and champagne. Though he wanted nothing more than to be a playboy, there was an obstacle in the form of family baggage. Specifically, his father was a sadistic military dictator who had been put in power in the Dominican Republic by the CIA. Trujillo, Sr. expected his son to continue in the family business. This had been abundantly clear to Ramfis since the day his father made him a full general — with full pay — at age nine. For this and other reasons, he grew up with a warped sense of power and, by the time of this Whisper cover, had already ordered several murders and indulged in the occasional gang rape. 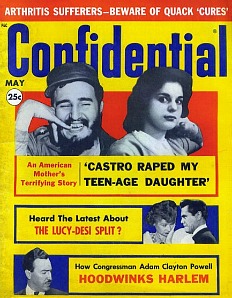 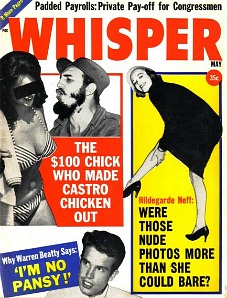 “He might have been considered a classic chip-off-the-old-block, save for rumors that Ramfis’s father was actually a Cuban named Rafael Dominicis — hence the “illegitimate dastard” tag in the banner. But the story about Ramfis being illegitimate was strongly denied by everyone involved (except Dominicis, who ‘disappeared’).

“In any case, through the late 50s Ramfis tomcatted his way from Hollywood to Paris, and only occasionally let his urbane manner slip to reveal someone considerably less charming beneath. He seemed to have settled into his chosen lifestyle permanently when he married an actress named Lita Milan, below, who had starred opposite Paul Newman in The Left-Handed Gun.

“But back in the Dominican, the impulsive Rafael Trujillo, Sr. was behaving less and less like the good lapdog the CIA had put in charge three decades earlier. Eventually, his U.S. benefactors turned against him and he died in a fusillade of possibly CIA-arranged bullets.

“Junior succumbed to the pull of familial duty, as well as the desire for revenge, and flew back to the Dominican to restore order. This involved personally killing some of the participants in his father’s assassination. While this must have given him great satisfaction, it did little to stabilize the country. Under pressure from both internal enemies and the U.S., Ramfis Trujillo fled to Spain less than a year later with a casket containing millions in cash, jewels, bonds, and his father. By 1969 Jnior was dead too, due to complications stemming from an automobile accident in Madrid.

“In the end Ramfis Trujillo presents an interesting question of nature versus nurture — was he meant to be a ladykiller, a real killer, or both?”