The bloggerati have been salivating all day over the apparently distinct possibility that the under-performing, flopping-around-like-a-flounder-on-the-sand Cowboys & Aliens will come in second for the weekend behind the horribly vile, reprehensible, apocalypse-summoning Smurfs. I’ve been too settled and soothed in Santa Barbara to care, but I know that David Poland‘s Cowboys & Aliens pan is good stuff.

Sunday morning update: Variety‘s Andrew Stewart is reporting that reps for Smurfs and Cowboys & Aliens are both estimating $36.2 million for the weekend, “leaving no room for a clear winner until [actuals] are released on Monday.”

Earlier: “According to Universal’s North American box office stats, Cowboys & Aliens opened only #2 Friday with $12.994 million, beaten by the $13.29 million debut of Sony Pictures’ The Smurfs,” Nikki Finke reported about five hours ago. “But Universal is still claiming its Western/scifi mashup should come in #1 for the weekend at $36.78 million, behind the little blue guys toon’s $36.02 million. Or is that only wishful thinking at this point?

“Smurfs is really overperforming while Cowboys & Aliens is way behind expectations to the point of tanking.”

Either somebody at Movie City News didn’t get the memo, or David Poland decided to ease up on Islamic Jihad just this once. For the first time in many years Movie City News today linked to a story of mine on Hollywood Elsewhere. It’s been a longstanding policy of Poland’s to ferociously ignore anything I write. My policy, on the other hand, has always been to link to a Poland riff or post an excerpt whenever he writes something cool or nervy (like when he zings Nikki Finke). 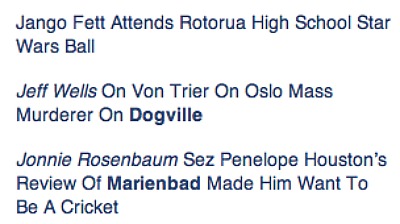 I’m a fair-minded Anglo-Saxon Protestant — I don’t do Jihads. I’m presuming I’ll be back on the MCN Shit List after this, but it was nice to see the link.

I drove up to Santa Barbara this morning to attend a screening of Mike Cahill and Brit Marling‘s Another Earth, which opened on 7.22 to mostly positive reviews. I wrote on 7.19 that while “it’s partly a sci-fi fantasy about the approach of a second earth, it’s mainly about loss and recovery and redemption” and as such is one of the year’s most intriguing indies, particularly for its emotional, skillfully under-written quality. 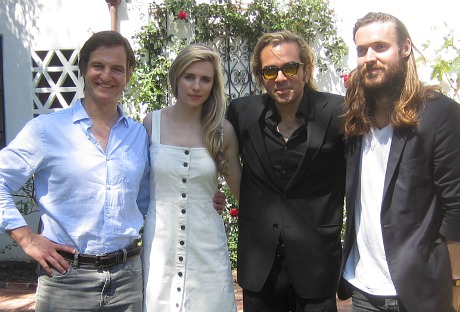 The first thing I did when I slipped into the darkened Riviera Theatre during the 11 am showing was to take a nap. The floor was so hard it almost hurt to lie on my back but I went right out. I woke up for the q & a. Costar William Mapother, star-cowriter-coproducer Brit Marling and director-cowriter Mike Cahill kicked it around with Santa Barbara Film Festival director Roger Durling.

Then everyone went over to a nice outdoor garden party at a beautiful classic Spanish home, hosted by owners Marilyn Jorgenson and Errol Jahnke. Lots of nice food and not too many guests, and everyone in a nice mild mood. The back yard had fenced-in chickens and a dog who liked playing tug-of-war with a stick.

The sun was so hot that after an hour or so I began to slowly melt like the Wicked Witch of the West…”destroying my beautiful wickedness!” Plus I was wearing mostly black just like Margaret Hamilton in The Wizard of Oz so it all fit together. You don’t ever want to be standing in the hot sun with a slight wine buzz-on. It doesn’t feel right. 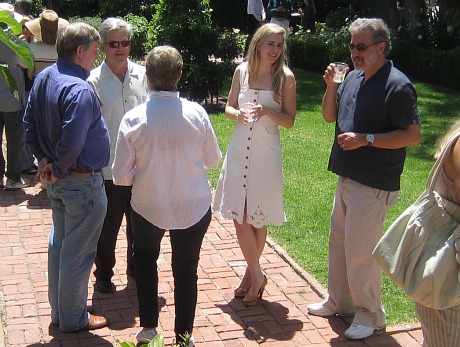 I spoke to Marling for a few minutes. I asked how many times she’d done the same dog-and-pony show with Cahill and Mapother since the Sundance debut six months ago. I wasn’t trying to trip her up by asking how bored she was getting from doing interviews, but simply how many times. Her answer — i.e., that she loves doing them and that today’s event was really special — told me she’s very political. Then she let her guard down and admitted there’s only one more to go…fine.

We spoke briefly about Nick Jarecki‘s Arbitrage, a financial chicanery drama in which she plays Richard Gere‘s daughter along with costars Eva Green and Susan Sarandon. It’s now being edited with a possibility of screening at Sundance 2012, Jarecki told me.

It’s very curious that Another Earth and Lars von Trier‘s Melancholia are so similar — both being about approaching planets getting closer and closer, but really about people with significant emotional and spiritual issues. And that these films were first seen at 2011 film festivals only four months apart. Cahill, Marling and Mapother all said they haven’t seen the Von Trier. 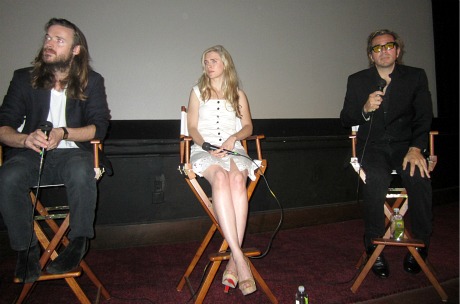 (l. to r.) Cahill, Marling and Durling during q & a at Riviera Theatre, which followed 11 am screening. 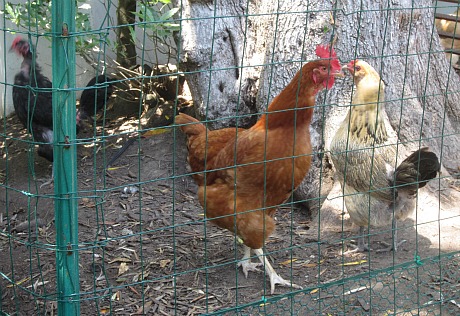 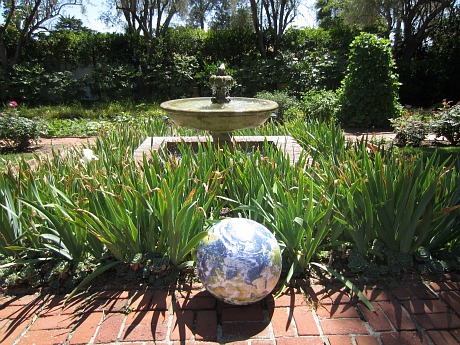 It’s conceivable that Tomas Alfredson‘s Tinker Tailor Soldier Spy (Focus Features, 11.18) might play the New York Film Festival following its Venice Film Festival debut, but it definitely won’t play the Toronto Film Festival. Deadline‘s Pete Hammond reminded me this morning that he reported this four days ago (on 7.26) in his piece about Oscar-season shufflings. My bad — I focused that day only on Paramount’s decision not to put Jason Reitman‘s Young Adult into any of the fall festivals.

On the other hand Hammond buried his revelation about Tinker, Tailor in the fourth paragraph of his story, so I’m not entirely out to lunch.

I asked yesterday if Tinker Tailor might eventually be confirmed as a Toronto Film Festival attraction or perhaps as a New York Film Festival closing-nighter or centerpiece. It would make sense to screen it at one of these two festivals following its world premiere at the Venice Film Festival, or concurrently with Venice at Telluride.

I asked the Focus Features gang and the N.Y. Film Festival crew for help, and they both stonewalled me. Even when I asked them to at least confirm yea or nay about Toronto being a no-go…silence. Focus played hide-the-ball last year with Sofia Coppola ‘s Somewhere, showing it at Venice but otherwise dodging the fall festivals. Will they repeat this strategy for Tinker Tailor? Possibly, but I wouldn’t be surprised if a NYFF deal is announced soon.

I wonder what ESPN’s Bill Simmons thinks about Young Adult side-stepping the festival circuit. On 7.6 he said during an ESPN B.S. report with Chris Connelly that he’d caught a screening of Adult and felt it was “tremendous.” I need to write or call him. 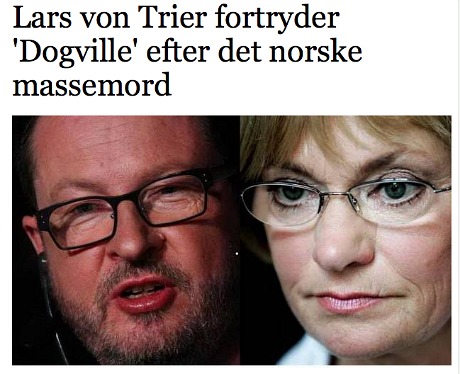 Von Trier is of course no more responsible for Breivik’s carnage than Catcher in the Rye author J.D. Salinger was responsible for Mark David Chapman‘s 1980 killing of John Lennon. And yet Breivik’s stated admiration of Dogville does suggest that Von Trier’s 2003 drama may have influenced him on some level.

Breivik’s Facebook page listed Dogville as his third favorite film right behind Gladiator and 300, and “even von Trier could easily discern the similarities between the carnage at Utoya and the film’s ending,” Thoren writes.

Dogville, one of Von Trier’s best, ends with Nicole Kidman‘s Grace, who’s been exploited and sexually abused by Dogville’s citizenry, ordering the pistols who work for her gangster dad (James Caan) to mow them all down with machine-gun fire.

“I feel badly about thinking that Dogville, which in my eyes is one of my most successful films, should have been a kind of script for him,” Von Trier said. “It’s horrific.

“My intention with Dogville was totally opposite. Namely, to ask whether we can accept a protagonist who takes revenge on the entire village. And here I take the absolute distance from revenge. It’s a way to nuance the protagonist and our feelings and perhaps even uncover it, so it just is not black and white ‘.

And yet Thoren reports that “even Trier believes that Dogville‘s final scene brings very unpleasant memories of Utoya.”

“And you can ask if I regret making the film,” Von Trier is quoted as saying. “And yes, if it was an inspiration, I’m sorry that I made it. But of course I have educational purposes with my films, even if I hesitate to admit it, and my views are the complete opposite of Breivik and his deeds.”

Von Trier said he also believes that all of Denmark needs to look inward after the tragedy in Norway.

“The other day asked a Belgian journalist Von Trier, a Dane, how he feels about the reported fact that Breivik’s manifesto repeatedly emphasizes Denmark as the only decent country because of the Danish policy towards Muslims,” Thoren writes.

“‘It makes me really hurt, but I understand it well,’ Von Trier replied. ‘We might have saved the children and young people on the island [if we had] done much more with Danish People’s Party. For it is the change in attitude which they have provoked, and as we just have let happen, we are paying the price for now.’

“I am no expert in politics, but as I see it, there has for years been a strong Danish tradition of fears of Islam. They have committed atrocious legislative efforts to annoy the minority here and pursue a policy that is well in line with what Breivik preaches. The fhostility to foreigners then spreads to the entire Nordic region and is also present in the minds of Breivik and gives him perhaps the excuse he needs. Therefore I can not see anything other than that we as a nation bears a responsibility for the tragedy in Norway.”

Is there a link between saying what one thinks about immigration and then resorting to violence?

“Of course. And everyone must say what they want. Freedom of speech is the whole cornerstone of our democracy. But it does not exempt [one] from liability. And we have sent the signal that it’s okay to spread hatred against Muslims. Especially after the Danish Peoples Party has been the government’s support party. Because when you lean up against the party and say: Okay, the positions we take in the bargain. So you legitimize them. ”

“I think there is a direct line from Pia Kjaergaard‘s humanity and to Utoya. One must demand that Kjaersgaard steps forward and takes her share of responsibility for what has happened in Norway. For it is a change of attitude, as she and her party have successfully represented

Pia Merete Kjaersgaard “is a co-founder and current leader of the Danish People’s Party, a nativist, national conservative political party in Denmark,” says her Wiki page. “She has become one of the best known politicians in Denmark during recent years, partly for her stance against multiculturalism, unwavering anti-immigration stance and partly for her parliamentary support for the center-right governments of Anders Fogh Rasmussen and Lars Lokke Rasmussen since 2001.”