Two days ago I wondered aloud if anything resembling the London riots might happen in this country. Not the underclass burning and looting but Average Joes expressing “basic fundamental rage about how the corporate elites are turning this country into South America, and how the radical legislative right has gone completely insane,” etc. Even though I said it could never happen here, I was beaten up for expressing some kind of adolescent excitement buzz. Glenn Kenny, Guy Lodge…they all piled on.

What I was basically saying, to repeat, was that street action of some kind was better than muttering into glasses of beer and making dark fatalistic jokes and watching ESPN.

Now that two MSM outlets have run discussion pieces about more or less the same topic (i.e., could it happen here?), I wonder what Kenny-Lodge will say now. “Get them too! Slap ’em down!” Or will they say, “Oh, well…maybe it’s okay to get into this topic as long as it’s these guys doing it.” Atlantic.com’s Raymond Bonner was written a relatively short piece called “Massive Riots: Britain Today, America Tomorrow?” with a subhead that reads “Joblessness, rising inequality, and a frustrated underclass are all being blamed for the violence that’s sweeping the U.K.” And the N.Y. Times has posted a Bloggingheads discussion about whether American riots could ever happen, etc.

Something’s off here. The Stiller Foundation is real and earnest, and I understand Stiller not wanting to sound overly solemn and sanctified. But the tone of this video implies the whole thing might be a put-on. And with all the talk about “See Jennifer Aniston Naked Foundation…forget it. I’m being too literal.

Without disagreeing with the views of The Association of Black Women Historians and MSNBC’s Melissa Harris-Perry about The Help, I still maintain (as will most critics) that Viola Davis‘s performance is strong and stellar. Harris-Perry doesn’t dispute this either. Don’t throw the baby out with the bathwater.

If only director Rick Mereki and his travelling buddy (i.e., the guy in the video) had made sure that the guy wore the same duds every time they shot. Then the effect would be stunning. Learn and Eat are pretty good also.

Another rightwing Christian-yokel Texas governor who has a Supercuts hair style and wears cowboy boots and fat yellow ties over blue shirts, and who talks like a shitkicker and believes in American exceptionalism? The presumption is that Gov. Rick Perry will eventually knock out Bachmann and may even prevail against Romney. (Possibly.) Republicans are actually toying with nominating a guy who’s basically Dubya with modifications?

Editor-screenwriter David Scott Smith recently sent me four episodes of Dead Island, a kind of comic video-game component. This led to me wonder if anyone has tried to create a TV or cable series about a family of flesh-eating ghouls called…I don’t know but let’s call them The Munchies. Call it a cross between The Munsters, The Addams Family, True Blood and The Flintstones.

A series about a typical suburban family living in some ghastly tract-home development (or in an upscale trailer park), except they’re zombies who need to occasionally prowl around and eat fresh victims. They could be mindlessly consumptive nouveau riche types living in a zombie McMansion. Most of the neighbors think they’re a quirky, strange-looking family with the gray skin and dead eyes and all, and one or two neighbors are starting to figure out who and what they really are. This sounds like a no-brainer to me. I’m presuming somebody has written a pilot along these lines….but maybe not.

Twenty years ago I tried to write a weekly Hannibal Lecter TV series pilot in which Lecter wanders from town to town and situation to situation like Caine in Kung Fu or Richard Kimble in The Fugitive, getting into inrigues and adventures and helping people with their problems. The stories usually boil down to this or that sympathetic character being victimized or harassed or threatened by some asshole, and Lecter solving things at the end of each episode by killing and eating the victimizer-harasser-threatener. Simple formula. Why didn’t a good screenwriter (i.e., someone unlike myself) as least try this?

I’ve learned over time that if there’s a semi-original idea or a concept I’m excited or intrigued by, the odds are that it won’t fly with producers or studio or network people. Many of my story ideas need to simmer for five or ten or even twenty years before they make sense to others. My Nothing magazine idea — “a series of snide, lighthearted riffs on the notion that glib irony and an increasing absence of sincerity or ‘meaning’ in the arts had virused into a kind of existential fast-food that everyone was consuming” — was hatched in 1979 or ’80, and only now, I think, would people really get it.

Having enough money in the bank and knowing more is on the way in and being able to roll along comfortably within a reasonable framework, paying for this and that and going out to dinner every so often without getting the willies or waking up with sweat and worry at 3:30 am, is a truly peaceful and wonderful thing. I say this as someone who’s been sweating money issues for a long time. Hell, most of my life.

I would be very loath to give up this hard-won feeling of economic assurance. This instinct to guard against any kind of economic relapse and being extra-vigilant about keeping the hull sealed and the fort protected is how amiable, liberal, mild-mannered people start to become conservative fucks. I’ll never be a rightie, but I can see how the process begins.

I feel nothing but admiration and affection for Peter Bogdanovich, and I’ve been enjoying his Indiewire “Blogdanovich” columns all along. But his 8.9 praise piece about John Ford‘s The Searchers doesn’t feel especially fresh and in fact has a tired pulse. Bogdanovich is a Ford scholar par excellence, of course, but we’ve been hearing this same old stuff about The Searchers for decades (“not only among the very best, but also among the final Western masterworks of the movies’ golden age”). So why re-state it? 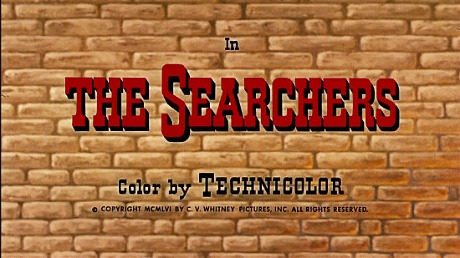 The first significant “take a fresh look at The Searchers” piece was written 32 years ago by New York contributor Stuart Byron. In it he called Ford’s 1956 film the “Super-Cult Movie of the New Hollywood.” And here we still are in the Age of Withered Obama, and The Searchers Bluray is a ripe and luscious thing to have and hold. We get it, we get it. Or I certainly do.

Here’s a counter-punch piece I posted a little more than five years ago:

“John Ford‘s movies have been wowing and infuriating me all my life. A first-rate visual composer and one of Hollywood’s most economical story-tellers bar none, Ford made films that were always rich with complexity, understatements and undercurrents that refused to run in one simple direction.

“Ford’s films are always what they seem to be…until you watch them again and re-reflect, and then they always seem to be about something more.

“But the phoniness and jacked-up sentiment in just about every one of them can be oppressive, and the older Ford got the more he ladled it on.

“The Irish clannishness, the tributes to boozy male camaraderie, the relentless balladeering over the opening credits of 90% of his films, the old-school chauvinism, the racism, the thinly sketched women, the “gallery of supporting players bristling with tedious eccentricity” (as critic David Thomson put it in his Biographical Dictionary of Film) and so on. 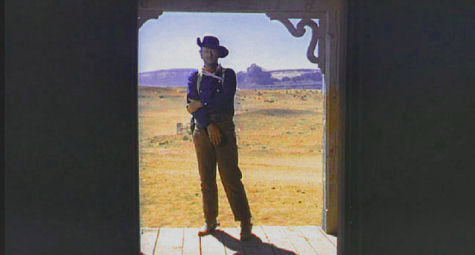 “The treacliness is there but tolerable in Ford’s fine pre-1945 work — The Informer, Stagecoach, Young Mr. Lincoln , Drums Along the Mohawk, They Were Expendable , The Grapes of Wrath and My Darling Clementine .

“But it gets really thick starting with 1948’s Fort Apache and by the time you get to The Searchers, Ford’s undisputed masterpiece that came out in March of 1956, it’s enough to make you yank the reins and go ‘whoa, nelly.’

“Watch the breathtaking beautiful new DVD of The Searchers, and see if you can get through it without choking. Every shot is a visual jewel, but except for John Wayne‘s Ethan Edwards, one of the most fascinating racist bastards of all time, every last character and just about every line in the film feels labored and ungenuine.

“The phoniness gets so pernicious after a while that it seems to nudge this admittedly spellbinding film toward self-parody. Younger people who don’t “get” Ford (and every now and then I think I may be turning into one) have been known to laugh at it.

“Jeffrey Hunter‘s Martin Pawley does nothing but bug his eyes, overact and say stupid exasperating lines all through the damn thing. Nearly every male supporting character in the film does the same. No one has it in them to hold back or play it cool — everyone blurts. 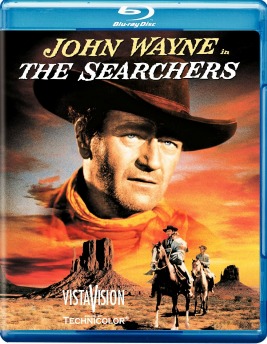 “I’ll always love the way Ford handles that brief bit when Ward Bond‘s Reverend Clayton sees Martha, the wife of Ethan’s brother, stroking Ethan’s overcoat and then barely reacts — perfect — but every time Bond opens his mouth to say something, he bellows like a bull moose.

“You can do little else but sit and grimace through Natalie Wood‘s acting as Debbie (the kidnapped daughter of Ethan’s dead brother), Vera Miles‘ Laurie Jorgenson, and Beulah Archuletta‘s chubby Indian squaw (i.e., “Wild Goose Flying in the Night Sky”)…utterly fake in each and every gesture and utterance.

“I realize there’s a powerful double-track element in the racism that seethes inside Ethan, but until he made Cheyenne Autumn Ford always portrayed Indians — Native Americans — as creepy, vaguely sadistic oddballs. The German-born, blue-eyed Henry Brandon as Scar, the Comanche baddie at the heart of The Searchers…’nuff said.

“That repulsive scene when Ethan and Martin look at four or five babbling Anglo women whose condition was caused, we’re informed, by having been raised by Indians, and some guy says, “Hard to believe they’re white” and Ethan says, “They ain’t white!”

“I don’t know how to enjoy The Searchers any more except by wearing aesthetic blinders — by ignoring all the stuff that drives me up the wall in order to savor the beautiful heartbreaking stuff (the opening and closing shot, Wayne’s look of fear when he senses danger for his brother’s family, his picking up Wood at the finale and saying, ‘Let’s go home, Debbie’).

“All I’m saying is, for a great film it takes an awful lot of work to get through it.” 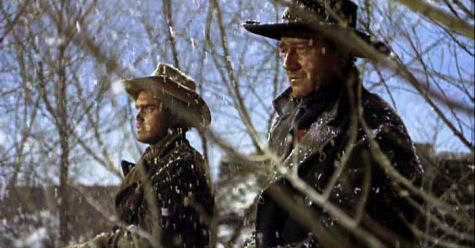