HE readers know that I’ve been a blown-away fan of Paddy Considine‘s Tyrannosaur since catching it at Sundance 2011. But I’ve been feeling frustrated ever since that no online trailer has turned up. I learned today that Considine, in defiance of any basic concept of fend-for-yourself distribution survival, is still cutting it together, despite Tyrannosaur being locked to open in England seven weeks hence. Who takes this long to finish a trailer? 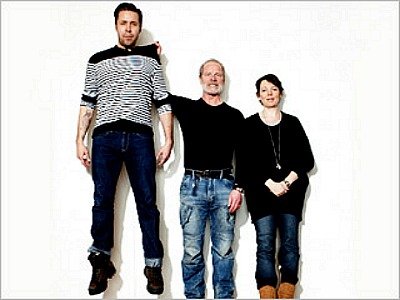 Marcu Hu‘s Strand Releasing is planning to open Tyrannosaur stateside sometime in November. (Hu declines to give a specific date.) He said he “cannot control Paddy’s final decision on the trailer. Of course we want it up soon, but we are respecting his decision with the producers to create what he wants. Paddy is very deliberate and wants a trailer that is as perfect as possible.”

Two months ago, on 6.16.11, I asked Hu why there’s no Tyrannosaur trailer, and he said it’s “being done right now with Paddy Considine overseeing it.” And here it is two months and four days later.

“What are you guys doing?,” I asked Hu today. “This is one of the best films I’ve seen this year with a female performance — Olivia Colman‘s — that truly screams out for award-season consideration, and it’s been almost eight months since it showed at Sundance, and two months since it played the LA Film Festival, and it’s opening in England seven weeks from now (on 10.7) and THERE’S STILL NO TRAILER?”

If Hu and Considine were secret “mole” agents whose true goal was to diminish and/or kill awareness of & interest in Tyrannosaur as much as possible, they would have made the same calls that they have so far.

“I was knocked out by this film, Marcus — I KNOW when I’ve seen something truly major — and you’re treating it like a some kind of fleabitten mutt dog who’s living in your back yard inside a cardboard box. What is Considine’s malfunction? The movie was finished nine or ten months ago and he can’t finish a trailer that he’s happy with? This is totally nuts.”

The somewhat nebulous, dramatic-content-avoiding, “what is this actually saying?” one-sheet came out in early July, fine. Give the team a pat on the back.

Sunday, 6:35 am: Thanks to “ModernLifeIsRubbish” for providing the just-changed headline.

Two days ago I shared my Albuquerque-to-Telluride driving itinerary, and only one guy — CMed1 — pointed out that 550 north to Durango is the fastest way of all. I did some checking and realized this was so. Three to four hours driving time. So no more Chama — that’s history. Thanks loads to all the experienced, knowledgable drivers who’ve travelled between these two cities and failed to mention the 550, and thanks especially to CMed1.

Yesterday’s “They Just Knew” post began with Fred Zinnemann‘s story about the August 6, 1953 opening of From Here to Eternity. 15 months ago I ran an update about Sony Home Video’s long-delayed Eternity Bluray. The high-def restoration was done in the summer of ’09 by Grover Crisp. A print was shown at the Academy in the fall of ’09 and then at the 2010 Cannes Film Festival. In May 2010 I reported that Sony intended to release the Eternity Bluray in late 2011, but that’s been pushed back to sometime in 2012.

Or, you know, whenever somebody finally says “okay, let’s put it out there, for eff’s sake. Three years of collecting dust on a shelf is enough.”

I have a suggestion that Sony execs will appreciate, I’m sure, because it’ll save them a lot of money. Never release the From Here To Eternity Bluray. Just forget about it. Just put it aside and keep it aside. This 1953 film never existed, the eight Oscars it won weren’t really deserved…just forget the whole thing and license it for high-def streaming on Hulu and Netflix and concentrate on releasing 21st Century Blurays that’ll make more money anyway.

Where did this idea about movies acting as shared-memory experiences, aesthetic-worship rituals and/or opportunities for spiritual nourishment come from anyway? You’re running a business, Sony Home Video, and that’s how you need to play your cards. If a Bluray isn’t likely to bring in a healthy profit that will impress Sony stockholders, fuhgedaboutit.

And people whose lives are, in their minds, basically about finding spiritual fulfillment and deliverance after they’re dead are ridiculous figures. They’re certainly appalling. The only reason religions are good for society is that they keep the nutters (i.e. those who would otherwise be seeking solace in alcohol or drugs or in the ravings of some antisocial cult leader) in line, and they instill a sense of moral order and temperance among people who lack the intelligence or drive or hunger to seek spiritual satori on their own.

Make it easy for Gaddafi to leave office and don’t threaten to go after him. If you say “we’re coming after you when you leave, we’re going to put you on trial in the Hague and make your life hell”…where’s the incentive for him to leave? Then again “if I leave I won’t get killed” is a pretty good incentive.