“Hollywood Elsewhere’s view is that nothing is so objectionable as ‘conventional industry wisdom,’ especially as reflected in Gurus of Gold charts and other tabulations in this vein. Unless, that is, conventional industry wisdom happens to be in synch with what we strongly feel and/or believe in. Hah!” — a quote from a Hollywood Elsewhere’s 2011/12 advertising pitch letter. 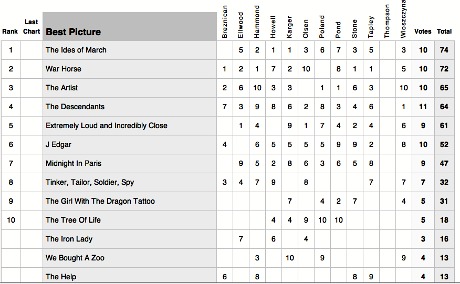 One noteworthy thing about the season’s first Guru chart are the indications of affection and prejudice toward certain films, a “1” vote idiotically being the highest and a “10” being the lowest. In what upside-down, hairy-kumquat realm does a lower number mean “better” and the lowest number is cause for celebration?

The Gurus with the most affection for Steven Spielberg‘s first-place The War Horse are EW‘s Anthony Breznican (1), Deadline‘s Pete Hammond (1), Sasha Stone (1) and Kris Tapley (1). David Poland, EW‘s Dave Karger and Hitfix‘s Gregg Ellwood each gave it a 2.

Spielberg’s less-engaged friends right now (and obviously this can and will change) are L.A. Times guy Mark Olsen (10), TheWrap‘s Steve Pond (8) and The Toronto Star‘s Pete Howell (7). What this means (and it means very little) is that some of these guys are feeling a certain cynical distance from The War Horse…that’s all. They’re probably a little tired of the emotional manipulations and John Williams scores that go into every other Spielberg film.

Another noteworthy thing about the season’s first Guru chart is that the Best Picture contender with the second highest vote tally is George Clooney‘s The Ides of March. Sight unseen, of course. Pure nothingness. All it means is that most of them want to see a smart political film with good acting and a strong theme about loyalty and betrayal, etc.

My top ten spitball contenders? In this order: Extremely Loud and Incredibly Close, The Descendants, The Girl With The Dragon Tattoo, The Ides of March, The Iron Lady, Moneyball, The War Horse, We Bought A Zoo, The Tree of LIfe and Midnight in Paris.

Yesterday I posted a podcast between myself, Jett Wells and Nathan Mattise on their weekly Whoa! magazine podcast. Mainly we discussed Telluride, Toronto, Drive, Andy Serkis and Warrior‘s Tom Hardy. And then it un-posted itself. Apparently there’s a gremlin in the system.

Amy Winehouse‘s toxicology tests show that no illegal drugs were present in her body at the time of her death, the AP reports. She had booze in her system, but that’s generally not a fatal condition. A Winehouse family spokesman released a statement today saying that “toxicology results returned by authorities have confirmed that there were no illegal substances in Amy’s system at the time of her death.”

So what happened then? What 27 year-old just up and dies? What 27 year-old body says, “You know something? I’m getting really weary. I think it might be time to shut down. I’ve been trudging along on the hard road of life for 27 years, and it’s a real slog, lemme tell ya.”

Just then two other bodies — one 44 years old, another 52 years old and a third that’s 71 years old — come along and shake the 27 year-old body by the shoulders. “You’ve been on this earth for 27 years old and you’re thinking about shutting down and dying?,” the 52 year-old body says. “What’s wrong with you? We’re all doing fine and we’re not thinking of quitting so what the hell, homie? Nobody dies at 27 unless they’ve been influenced by a foreign substance.”

The last time I looked the Civil Rights movement of the ’60s was about empowering the disenfranchised, particularly by ensuring that people of all ethnicities had the absolute right to vote. Today Gov. Rick Perry equated that struggle to the current efforts of right-wing, corporate-fellating serpents to lower taxes on business-owners and the corporate well-to-do. This, to him, is what American “freedom” is all about.

No doubt about it: there were iPad-like devices in Stanley Kubrick‘s 2001: A Space Odyssey. They sure do look like iPads — same size, similar illumination, etc. Which doesn’t bode well for Apple’s attempt to prevent Samsung from selling its Galaxy Tab.

“Apple and Samsung are currently engaged in a high-stakes intellectual property battle, with Apple [looking] to stop Samsung from selling its Galaxy Tab and other Android-based products,” MacRumors reported this morning. “Apple claims that Samsung has infringed upon Apple’s intellectual property rights by copying the designs of popular Apple devices such as the iPhone and iPad.

“According to court filings, Samsung has presented a scene from Stanley Kubrick’s 1968 film 2001: A Space Odyssey as evidence of prior art that should invalidate Apple’s design claims on the iPad.

“From the filing: ‘Attached hereto as Exhibit D is a true and correct copy of a still image taken from 2001: A Space Odyssey. In a clip from that film lasting about one minute, two astronauts are eating and at the same time using personal tablet computers. As with the design claimed by the D-889 Patent, the tablet disclosed in the clip has an overall rectangular shape with a dominant display screen, narrow borders, a predominately flat front surface, a flat back surface (which is evident because the tablets are lying flat on the table’s surface), and a thin form factor.

“‘The patent in question is a design patent covering the ornamental design of the iPad, with Apple claiming that the Samsung Galaxy Tab is substantially identical to that design.

“‘By pointing to an example of a similar design made public in 1968, even if not an actual functioning tablet device, Samsung hopes to demonstrate that there is little variation possible when designing a tablet and show that the general concept used by Apple for the iPad has actually been circulating for decades.'”

Luc Besson‘s The Lady is a Toronto Film Festival-bound drama about the decade-long house arrest of the Burmese politician Aung San Suu Kyi (Michelle Yeoh), and also about her marriage to the late Dr. Michael Aris (David Thewlis). Honestly? The first three things that came to mind were as follows:

(a) A movie about a good woman being kept under house arrest for ten years?

(b) A movie about the not-exactly-Cary Grant-like Thewlis enjoying conjugal privleges with the beautiful Yeoh? Has Thewlis ever enjoyed nookie from any attractive woman in any movie, ever? Answer: Yes — Thandie Newton in Besieged.

(c) This, I’m betting, is a p.c. movie that’s about the audience feeling good about itself for watching a movie about a good, reform-minded woman being kept under house arrest for ten years.

“It is the fight of a woman without any weapons, just her kindness and her mentality. [Suu Kyi] is very Gandhi-like.” — Luc Besson.

The Lady script is by Rebecca Frayn “who began working on the project after she and her husband, producer Andy Harries, visited Burma in the early 1990s,” says the Wiki page. “Harries’ production company Left Bank Pictures began development of the script in 2008 under the working title Freedom from Fear. Harries wanted Michelle Yeoh as the lead and had the script sent to her.

“During the shooting of the film, news broke that Aung San Suu Kyi’s house arrest had been lifted and Yeoh was even allowed to visit her.

34 Comments
You Shook Me

A 5.9 magnitude earthquake has happened in northern Virginia, and was acutely felt in Washington, D.C. Obviously an unusual occurence in the northeast corridor, but nothing to hyperventilate about. People in Manhattan felt it also. I’ve just heard a report just heard that tremors were felt in Martha’s Vineyard. But seriously, folks — hardcore Southern Californians are used to this. Earthquakes can be devastating and deadly, but most of the time they’re a metaphor for the general unpredictability of life and the instability of things.

We need video of stuff falling off shelves and ceiling-hung fleurescent lamps swinging back and forth. And if no decent video results, we need to put it to bed in a couple of hours. 11:55 am Update: A pretty good video has emerged. This Brooklyn guy is on it. “Bowl of cereal at 12 noon…Jurassic Park 5…T-Rex…stock up on cans of sardines…the friggin’ world is about to end.”

Scott Feinberg‘s mom was watching a professional tennis tournament in New Haven, and “the entire stadium shook,” according to a tweet.

A female friend about 15 minutes ago: “Oh my God, I have to call my father and see if he’s okay!” Me: “Yeah, it sounds really serious! The earth trembled! You’d better make sure he’s okay!” Female friend: “That’s very cruel, Jeff. And it’s not funny.” Me: “No, but it is the huddling instinct. And you’ll be shutting down the nationwide cell phone network along with millions of others. But don’t let me stop you. Go for it.”

My son Dylan was catching a cigarette on the roof of my ex-wife’s apartment building. “What I felt was so subtle I didn’t immediately assume it was anything. I didn’t put a name to it. It was like ‘wait…what was that?” Then I went on Facebook and everyone was talking about an earthquake.”

I’ve got 45 films on my Toronto Film Festival list, 20 of which I probably won’t get to see, and a bunch more titles have just been added? Thanks, great…this festival is ridiculous. It’s a tsunami that washes over you and the riptides carry you along, and it’s all you can do to hang on to your Macbook Pro and keep your head above water. Too. Many. Films.

Aki Kaurismaki‘s Le Havre, Gus Van Sant‘s Restless, Alexander Sokurov‘s Faust, the Dardennes’ brothers‘ The Kid With a Bike, Bruno Dumont‘s Hors Satan, Bela Tarr‘s The Turin Horse; and Nuri Bilge Ceylan‘s Once Upon a Time in Anatolia. Thankfully several of these will also show at the NY Film Festival.

Not to mention Davis Guggenheim‘s From the Sky Down, Jonathan Demme‘s Neil Young Life and Cameron Crowe‘s previous announced Pearl Jam Twenty, which will debut on Saturday, 9.10, at the Princess of Wales Theater.

Responses to Ryan Gosling‘s Manhattan street-fight intercession (which may have happened on Sunday, 8.21): (a) The way the two combatants are half-wrestling and half slapping-and-jabbing is how most fights happen in real life, (b) Hollywood guys take an oath at an early age to never portray this kind of fight in movies, (c) the narration by the woman who’s shooting the video (“The Notebook guy?…you’re lying, you’re lying, you’re lying, you’re lying…oh, it is!”) is breathtakingly lame, and (d) great camerawork with the hands and fingers in front of the lens (or is that some idiot security guy)?