With Phil Contrino‘s wifi knocked out by the moderate tropical rainstorm that began as Hurricane Irene, yesterday’s Oscar Poker was just between Sasha Stone and myself. We talked about Hurricane Irene and possible Telluride Film Festival selections and the most likely Best Picture contenders. Here’s a non-iTunes, stand-alone link.

This Danish TV spot for Fleggaard was uploaded last January, and actually dates back to spring 2010. Fleggaard is a kind of Danish Costco. (Although the stores are located just across the German border.) For all I know everyone has seen this thing except me. I was a virgin until today.

Deadline is reporting that Josh Brolin will star in Spike Lee‘s Oldboy, a remake of Park Chan-wook‘s 2003 cult thriller. The script (which I wouldn’t mind reading if anyone has a PDF lying around) is by Mark Protosevich. Pic will roll in March or seven months’ hence. Brolin’s next gig is Warner Bros’ Gangster Squad. Then comes Oldboy followed by a June lensing of Jason Reitman‘s Labor Day, costarring Kate Winslet. Let’s ignore the fact that Brolin is in Men in Black 3 — nobody wants to think about that.

Albert Brooks‘ Real Life “hammers on a conundrum ducked by most documentaries, An American Family included: no matter how unobtrusive a filmmaker tries to be, his subject is still likely to react to the cameras by subtly altering his behavior, thereby making existence into a kind of performance, infusing life with fiction’s DNA and creating a hybrid monster that’s at once real and unreal.” — from a “Press Play” essay on this 1979 film by Robert Nishimura and Matt Zoller Seitz.

Earlier: Acclaimed during last May’s Cannes Film Festival and now scheduled to play at the Toronto Film Festival in less than two weeks, Gerardo Naranjo‘s Miss Bala will, according to the IMSDB, be released by 20th Century Fox on 10.14. Yup, that’s what I said. Obvious question: why is “big Fox” releasing a Mexican-produced, Spanish-language action thriller with no big stars? Isn’t this kind of film outside their comfort zone?

It’s possible, I suppose, that 20th Century Fox isn’t handling U.S. distribution for Miss Bala, as the IMDB says. I tried for a yea-nay from a Fox rep earlier today, but she didn’t reply. Perhaps tomorrow (i.e., Tuesday).

An 8.29 story in the French-language edition of Le Figaro says Muammar Qadaffi is hiding out in Bani Walid, a mid-sized town with an airport about 100 km southeast of Tripoli. Once he’s captured, the Libyan rebels need to dramatize the former dictator’s status to Libyan citizens. Bring him back to Tripoli and slowly drive him around the city inside a bulletproof, hard-plastic cage. Make it clear that he’s over. 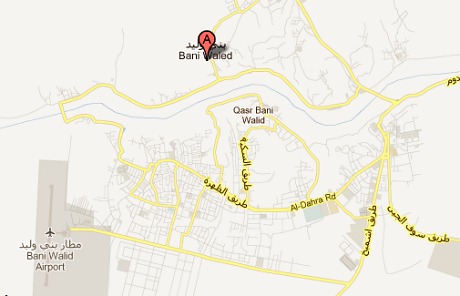 Didn’t the Romans do this with defeated foes, forcing them to walk through the streets in chains, etc.? Same difference. The Romans weren’t animals. They knew that such acts of theatre were satisfying and therapeutic for the citizenry.

If Osama bin Laden had been captured instead of killed and someone with my mentality had been running things, he would have been put on parade in front of Manhattan residents. Sitting inside the same impenetrable plastic cage, he would have moved slowly down Fifth Avenue from 72nd Street to 8th Street, maybe with some hay spread around the cage floor to emphasize the tamed-animal metaphor. People could have hissed and booed and thrown eggs and vegetables, and a lot of people would have known closure.

This anti-meat-industry essay, narrated by Paul McCartney and initially posted in late ’09, made me sick. That’s the intention, of course, but also the reality. I’ll never stop eating fish (especially salmon) but I never buy steak or hamburger or chicken or pork to bring home. The entire country is going to be overweight or obese by 2048, in large part due to fast-food meats. Face it — the majority of fast-food eaters are probably going to vote for Rick Perry and Michelle Bachmann.

Initially posted by Twitch and then by Badass Digest‘s Devin Faraci, this trailer for Jaime Osorio Marquez‘s The Squad (El Paramo) indicates an above-average ride. The Columbian-made thriller will open sometime in 2012. It may not be fully finished, which would be an acceptable reason why it’s not playing at the Toronto Film Festival.

been lost,” the synopsis reads. “The authorities — believing the base to have fallen to a terrorist attack — send a nine-man squad to investigate. When they arrive, the men discover a shocking scene of carnage, and only one survivor — a mute woman in chains.

“Gradually the isolation, the inability to communicate with the outside worldand the impossibility of escape begin to undermine the sanity of the soldiers.They start to question the identity of their enemy, and the true nature of the strange, silent woman. Is she a terrorist? A victim? Or something mores sinister? Something supernatural…?

“Paranoia takes root. Prisoners of fear and the terrible secret they share, their humanity abandoned, the men turn savagely on each other.”

A film-industry hotshot and festival maven has taken issue with Kris Tapley‘s certainty about how there are “always” holdovers from Sundance and Cannes playing at Telluride Film Festival. “There are actually Sundance films playing there only once in a very blue moon,” the hotshot says. “Though it’s not an officially stated rule, 99% of what screens there is a North American premiere, so it’s Cannes, okay, but Sundance, not okay.

“In the decade I’ve been attending, the only exceptions that come immediately to mind are The Savages, which screened in large part due to Laura Linney, who met her future husband in Telluride the year they tributed her and now lives there part of the year and is always around during the festival, and An Education, because, well, it was An Education. Just to set the record straight there.”

Three and a half years old, I mean. Dennis Lee‘s Fireflies in the Garden, shown at the 2008 Berlin Film Festival and having played theatrically across the globe in ’08 and ’09 primarily, is finally getting a limited U.S. opening on 10.14. It has the earmarks of a rote family-dysfunction-and-abuse drama. Ryan Reynolds Julia Roberts and Willem Dafoe costar. It has a 28% Rotten Tomatoes average thus far.

“Hud thrives,” the UnTexan wrote or or about 9.20.10, following the death of screenwriter Irving Ravetch, who co-wrote Hud with his wife, Harriet Frank. “His offspring litter their shit in McMansion-sized heaps across the landscape. They’re everywhere and they go by various names. Texas Governor Rick Perry is a hardcore Hud-ite. Wasn’t Jesse Jackson just warning President Obama to beware of Hud-ism and its many charms?

“Now Texas is all over the place. Hud’s world is our world. It’s the world of the minor character writ large. That makes it a scary place. See the movie. It’s a good movie. And think about Irving Ravetch, the man who saw Hud coming down the road, and tried to warn the rest of us what was headed our way.

“Ravetch found a relatively minor character in Larry McMurtry‘s novel, “Horseman, Pass By“. He was called Hud Bannon and Ravetch recognized him for what he was, and pumped him full of bullshit and hot air and turned him into the unprincipled, greedy, Bible-thumpin’, money-grubbin’, land-grabbin’, stripmall-buildin’, queer-baitin’, Mexican-cheatin’, black man-draggin’, prisoner-executin’, sleaze-baggin’, fuel-suckin’, George W. Bush-electin’ (a minor character writ large if ever there was one), aw-shucks-dumbass-from-Dumas shit kickin’ good ol’ boy we all have come to recognize as the charming Texan next door.

“Ravetch saw Texas for what it was and called it Hud.

“Here’s what Hud’s old daddy Homer Bannon says in the movie: ‘You don’t care about people, Hud. You don’t give a damn about ’em. Oh, you got all that charm goin’ for ya. And it makes the youngsters want to be like ya. That’s the shame of it because you don’t value anything. You don’t respect nothin’. You keep no check on your appetites at all. You live just for yourself. And that makes you not fit to live with.’

“Or as Hud himself puts it: ‘This country is run on epidemics, where you been? Price fixing, crooked TV shows, inflated expense accounts. How many honest men you know? Why you separate the saints from the sinners, you’re lucky to wind up with Abraham Lincoln….I say let us dip our bread into some of that gravy while it is still hot.’

“To which Hud’s daddy replies: ‘You’re an unprincipled man, Hud.’ To which Hud answers: ‘Don’t let that worry you none. You got enough for both of us.’