This new Descendants trailer is doing the usual lowball thing by trying to sell Alexander Payne‘s quietly comedic, often deeply moving drama to the dumb-asses by emphasizing all the obvious broad elements. George Clooney running down a street like an ostrich and hiding behind a hedge like Chico Marx, Robert Forster cold-cocking a teenage kid, etc. Every bit in this trailer says “fear not, folks…this film is going to aim low and stay low…everything in it will be right on the nose.”

“I keep meeting people — typically, men in their late 20s and early 30s — who say, ‘You know, I just don’t have the impulse to go to a movie anymore,’ or ‘There aren’t any movies any more, are there?'” This is New Yorker critic Pauline Kael writing 37 years ago about a certain spirit falling away in movies and moviegoers, and how Hollywood’s tendency to flaunt crudeness and brutality was turning off audiences, and how others seemed to “like movies that do all the work for them” and were revelling in the lack of feeling and finesse. 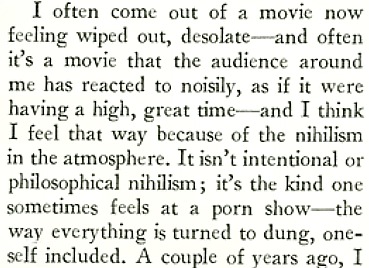 I especially relate to the line about how Kael will “often come out of a movie feeling wiped out, desolate…and I think I feel that way because of the nihilism in the atmosphere.”

The article, called “On The Future of Movies” and available in the current The New Yorker online, was written in August 1974, and all you can think about as you read it (and it’s an excellent essay up and down) is “wait, wait…this was smack dab in the middle of the greatest era in American movies!” It certainly offers perspective. Here was a brilliant critic kvetching with great feeling and articulation, and she didn’t know what she was in the middle of. She certainly couldn’t have foreseen what was to come in the ’90s and the aughts. She couldn’t have seen how poisoning and corporate-minded and utterly soulless most commercial films would eventually become. She had no idea.

Here, by the way, is her famous October 1967 Bonnie and Clyde piece.

Because my attention is splattered all over the place and there’s only one of me and because an occasional N.Y. Times editorial will catch my eye, I’ve only just now seen this month-old Elizabeth Warren video (which is mentioned/linked to this 10.17 editorial “Elizabeth Warren’s Appeal”). Sue me, admonish me, slap me around.

“Warren’s larger appea comes from her ability to shred Republican arguments that rebalancing the tax burden constitutes class warfare,” the editorial says. “In a living-room speech that went viral on YouTube last month, she pointed out that people in this country don’t get rich entirely by themselves — everyone benefits from roads, public safety agencies and an education system paid for by taxes. And those who have benefited the most, she says, need to give back more.

“‘You built a factory and it turned into something terrific or a great idea — God bless!’ she said. ‘Keep a big hunk of it. But part of the underlying social contract is you take a hunk of that and pay forward for the next kid who comes along.'”

So I’m running Tyrannosaur ads to help the film, and Olivia Colman‘s husband and I have arranged for me to do a phoner with her sometime tomorrow. But Strand Releasing is still refusing to screen it for LA movers, shakers & bloggers in a timely manner. The only screening I know about will happen at West L.A.’s Royal Theatre at 10 am or thereabouts on Tuesday, November 8th — three weeks from now, and 10 days before the film opens on 11.18 .

No other screenings have been set, and I double-checked with Strand and its New York pr rep, Falco Ink, just before writing this.

Through my own efforts several noteworthy journalists with the ability to keep the conversation going about Tyrannosaur and Colman’s performance in particular are ready to see it right now, which is a relatively dead time in the calendar and a little more a month before it opens, and Strand has decided to delay showing it until November 8th?

If Strand’s Marcus Hu had been flown down to Mexico and subjected to Manchurian Candidate-type conditioning so that he would return to Los Angeles with the explicit intention of destroying any chance of launching a word-of-mouth campaign for Colman’s shattering performance, he would be playing his cards exactly as he is now.

A morning screening at the Royal Theatre is the pits. Showing your film there at 10 am is a way of saying to critics, “Ladies and gentleman, we are complete losers and so is our film.” I realize that evening screenings at places like the Wilshire Screening Room are on the pricey side — $1500 to $2000, depending on which night, etc. Afternoon screenings can run around $1000 or $1200 or a bit more, depending. So it’s not cheap to hire a room — I get it — but there’s penny-wise and there’s pound- foolish.

Let’s start a Hollywood Elsewhere Tyrannosaur screening room funding campaign right now. All we have to do is raise $2000 for a single evening’s rental. Let’s set a do-or-die deadline of Sunday, 10.23. If you believe in fairies and people power and you feel that exceptional performances like Colman’s deserve their day in the sun, send your Pay Pal dollars to Jeffrey Wells (gruver1@gmail.com). $2000 isn’t that much to raise among 30,000 or so unique readers. I promise I will pass along every nickel to Marcus Hu.

Who cares about this film more, me or Strand?

Has Strand given any thought to passing around a charity bowl at parties? Or asking for modest online donations? Or maybe a little panhandling inside the Westside Pavilion on weekends? Every extra dollar helps.

Has wildcat tweeter Ellen Barkin fired her publicity firm or is she just being spritzy or colorful by saying her “pr peeps can fuck their motherfuckin’ PR selves”? A headache, obviously, for the publicist[s] in question but at the same time it’s hilarious. The woman is manic, fearless…a tweet Valkyrie. We live in public. “Jew. Jew. Jew. Muthafukkin Jewish fuckin’ Jew”…shades of Ginsberg and Burroughs!

If consumed in sufficient quantities, rum can make you feel like you’ve dropped a tab of mescaline. This is a 21st Cenmtury concept, I realize. I wish I’d known about it in the old days but I guess the rum industry wanted it kept quiet. Which reminds me that I haven’t gotten any screening invites to see The Rum Diary. Has anyone? 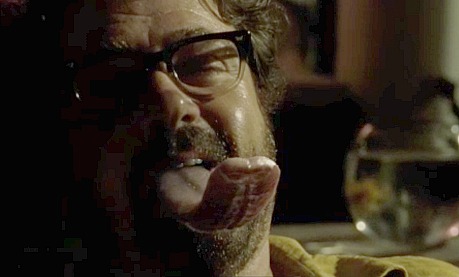 Philadelphia Inquirer critic Carrie Rickey wasn’t elbowed out of her job like so many film critics have been over the past few years. She opted out, she’s saying, because the 60-hour-per-week pace had become so demanding that she could barely keep up , and because she couldn’t find a way to write book pitches on the side. She wants to write long-form.

Rickey will continue to tap out reviews on the side but only six per month, she says, or roughly 1.5 reviews per week.

A Philadelphia Daily News guy told me this morning that many, many people have been offered buyouts by the Inquirer. Not just editorial but people who work in the printing and distribution end. “There just aren’t a lot of resources over there any more,” he said.

The grind of reviewing so many films was “hard”, Rickey says. Well, yeah…it sure is. I imagine that many, many film writers feel the same way about their jobs. I work 10 to 14 hours a day, seven days a week. What Rickey is really saying, I think, is that she sort of doesn’t mind the idea of being semi-retired and not having to work as hard as she once did.

“It’s a great gig you have,” I told Rickey this morning, “and if I were you I wouldn’t give it up for anything, no matter how tired I might be.”