Support on Patreon Follow @wellshwood
11 Comments
Shadows Of Things Past

I’ll be attending the Savannah Film Festival the weekend after next, from 10.28 through 10.31. It’s been ten years since I last attended. I was brought down by NY publicist and Savannah native Bobby Zarem, who introduced me that year to Jane Fonda and Stanley Donen . The lures this time around are Ellen Barkin and Another Happy Day, and the company of Alec Baldwin, James Toback and Ray Liotta. And the ghosts, of course. Savannah is filled with them. 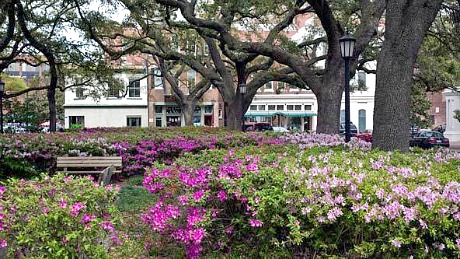 Two thoughts after seeing David Cronenberg‘s A Dangerous Method for the second time last night. Keira Knightley is still the spark of the film — things would be too dry and measured without her jaw-jutting intensity. And the talkiness plays better the second time. You go in knowing what it is and accepting that, and you settle into Christopher Hampton‘s script like an easy chair. Here‘s my original review. 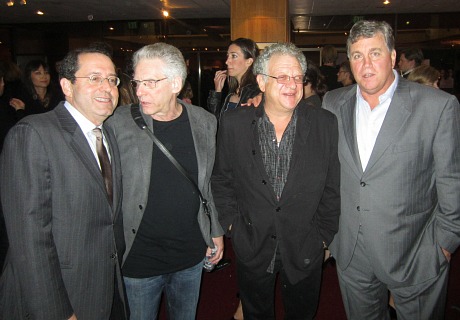 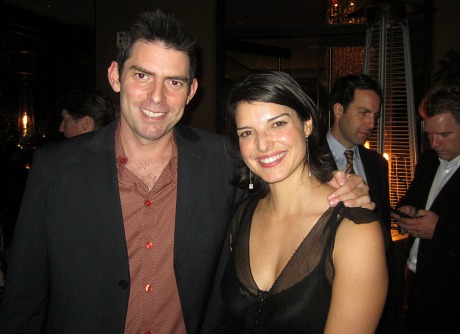 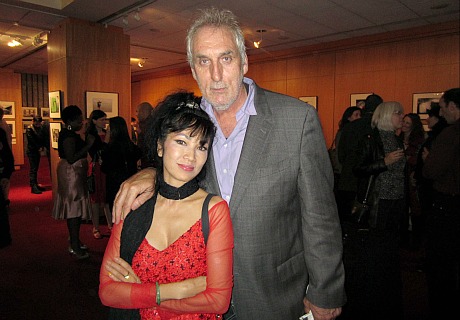 Zhang Yimou‘s The Flowers of War (formerly Nanjing Heroes) is about the 1937 Nanjing Massacre, at the time of the Second Sino-Japanese War. Christian Bale plays real-life missionary John Magee, an American priest who helps a number of Chinese as they struggle to survive the violent invasion of the city by Japanese troops.

Set to open in China on 12.16.11, pic has been selected as the Chinese entry for the Best Foreign Language Film at the 84th Academy Awards.

Between his wonderfully exacting and deeply felt turn as Edward de Vere in Roland Emmerich‘s Anonymous and his immersive, authentic performance as a somewhat burnt-out musician in Noah Baumbach‘s Greenberg, I’m ready to offer an apology to Rhys Ifans for trashing him ten years ago…despite the fact that I was on the money when I did. 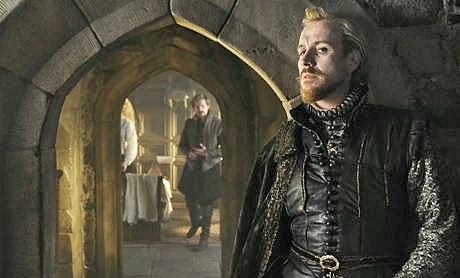 Here’s how I put it in a 2001 Reel.com column called “Stop Rhys Ifans,” which was mainly written in response to his performance in Roger Michell‘s Enduring Love:

“I want to put this carefully so as not to be misinterpreted. I’m trying to formulate what I consider to be a modest and temperate industry initiative. The unmalicious goal is the total termination of acting jobs given to Rhys Ifans, the downmarket, stubble-faced tall guy with dirty-blonde 1971 hippy hair who, in his movie roles, is often given to beatific expressions and saying lines in such a way as to produce vague mystifications.

“It’s just that Ifans, a 36 year-old, six-foot-two Welshman, has been cast as more or less the same guy in film after film, and the cumulative effect has finally reached repulsion levels. Whatever the character, whatever the story or film title…Human Nature, Danny Deckchair, portions of Vanity Fair, Roger Michell‘s Enduring Love…Ifans lumbers up to the plate and goes into his gangly, grungy, S.P.C.A. mode.

“Did Ifans’ performances in The Shipping News, Once Upon a Time in the Midlands and Hotel deliver the same? Memory isn’t serving; I may have erased the hard drive out of some insuppressable instinct.

“In Enduring Love, which I saw Thursday night, Ifans plays what struck me as hands-down the most profoundly icky and repulsive stalker character in the history of film.

“I didn’t want to see Ifans killed in some quick tidy way; I wanted to see a little torture thrown in first. The story, set in England and based on the Ian McEwan novel, is about the after-effects of a bizarre falling death upon two men (Ifans being one) who happen to witness it. It seemed only natural that Ifans character should be dealt with similarly. A plunge off a nice tall building, say. For symmetry’s sake.

“Lamentably, Michell is too original a director to go for such a stock indulgence. This is a strong disciplined film with nothing so mundane as mere audience satisfaction on its agenda. It doesn’t compromise or indulge in half-measures. I know I sound muddled, but in its own way Enduring Love is a very commanding work.

“But I really, really don’t want to see Ifans playing a downmarket, stubble-faced tall guy with dirty-blonde 1971 hippy hair ever again. I don’t know anything or presume anything. As ship’s engineer Steve McQueen said to the first mate in The Sand Pebbles (and yes, I’ve referenced this line before), “I’m just tellin’ ya.”

“I’m not trying to be cruel or cause pain. If I know this industry, Ifans will continue to work for years to come. (He’s apparently now making, or about to make, a new movie with Human Nature director Michel Gondry.) Casting directors generally have minds of their own and couldn’t give two shits.”

My ultimate point is that Ifans has grown into a much more accomplished actor than he was ten years ago, and has lucked into better roles.

I went into Roland Emmerich‘s Anonymous (Sony, 10.28) with a chip on my shoulder. I’ve been suffering for 15 years from Emmerich’s end-of-the-world monster-disaster films (Independence Day, Godzilla, The Patriot, The Day After Tomorrow, 2012), and if there was any way I could mess with Anonymous, I was ready and loaded for bear.

Why the hell was this Destroyer of Worlds making a film about Edward de Vere (who some believe to be the actual author of the plays attributed to William Shakespeare) anyway? You can’t make films for cretins and then just turn around and go for the swells.

And then I saw it and was myself turned around. Anonymous is Emmerich’s best film by a mile. It’s his only good film, really. It’s a fairly complicated, time-shifting Elizabethan period thing, and yet brilliantly written by John Orloff, impeccably visualized with the finest historical CG I’ve ever seen, and acted superbly up and down, first and foremost by Rys Ifans as the aforementioned de Vere.

It’s enjoyably smart but not overly dense or stuffy. It challenges but isn’t difficult to follow, and it basically just does it right.

Orloff’s screenplay isn’t just a debunking of the legend of William Shakespeare. It’s also, simply, a yarn well told. I was interested and engaged in every turn of the tale. [That’s Orloff in the above video clip, talking with KCET Screening Series host Pete Hammond the night before last at the Aero.]

Also top notch are Vanessa Redgrave as Queen Elizabeth, Joel Richardson as young Queen Elizabeth, David Thewlis as the malevolent William Cecil and Edward Hogg as his venal, hunchbacked son. Less engaging as Sebastian Armesto as Ben Jonson and Rafe Spall as the loutish and thoroughly asshole-ian William Shakespeare, a fellow who “never wrote a word” of decent prose, according to the Oxfordian theory.

Many who know something about William Shakespeare and Elizabethan-era history will despise Anonymous, of course. Holger Schott Syme, an English and Drama professor at University of Toronto Mississauga, wrote last month than Emmerich’s film is “stupid…a pompous, ignorant, ill-informed, and clumsy film. Worst, it’s a film that thinks it has an important story to tell. It doesn’t.”

There’s certainly no argument that on a level of pure craft, Anonymous is highly admirable.

I still don’t understand why Emmerich spent so many years shoveling expensive CGI crap into the laps of Joe and Jane Popcorn, making hundreds of millions for himself, and then suddenly turned a corner in his mid 50s and decided to go all classic-y and thoughtful and historical and whatnot. There’s something not right about this. Emmerich did nothing but degrade and befoul the House of the Movie Godz for years. He was doing the work of the devil, in a sense, and you don’t just get to throw that karma off and say, “Okay, I’m into something else now.” I respect him enormously for his latest effort, but I still don’t trust him.

“Studios would love to eliminate the massive cost of having to produce hard-copies of their films to send to awards voters,” The Hollywood Reporter‘s Scott Feinberg has written, “but will streaming completely replace DVDs or Blu-Rays anytime soon? Say, within the next five years? The overwhelming consensus among awards strategists is that they will not — unless the Academy updates its rules again and demands that all studios make the transition at the same time.

“Understandably, no studio wants to be the first to make that transition, because doing so would inherently limit the audience of their films to some extent, since not all voters presently have the ability to stream films, and many like — and have come to expect — having hard copies.”

Streaming video will never become popular until there are remotes that make it easy (as opposed to difficult or incredibly tedious) to choose and identify films for streaming. The keyboard on my Samsung Bluray remote is completely unsuited for this. I would rather die of lupus than try to streamload another film via Netflix or Hulu Plus or BooBoo or YeeHaw with this doofusy remote of mine.

“I’m told that the Academy is, in fact, exploring a partnership with iTunes (which, as previously mentioned, is handing streaming for SAG) and the Deluxe Entertainment Services Company (which is handling streaming for the Visual Effects Society), and that something of this nature is actually quite possible in the not too distant future.

“One strategist granted, ‘There’s gonna be a natural attrition that happens as more and more people get savvy.’ But another emphasized, ‘I don’t see that day arriving anytime soon. It’s like when DVDs replaced VHS — it’s gonna take a while.'”

Oh, wait…sorry…this is from the 1973 Richard Lester version. The really good one, I mean, as opposed to Summit’s 3D version (opening on 10.21), which currently has a 26% Rotten Tomatoes rating.

Aaah, the brilliance of staging a beautifully lighted sword fight inside a church with a group of nuns telling the combatants to “stop! stop!”, and then both men becoming so exhausted by the end that they can barely stand and are close to passing out. When the loser takes a sword through the chest, you’re sensing that he’s saying to himself, “Not good to be dead but least it’s over now! I can at least rest!” 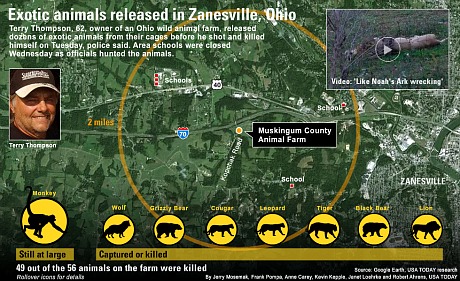 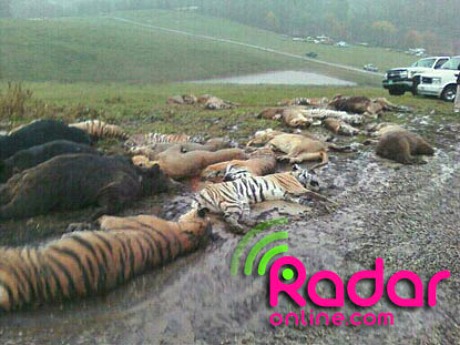 To his dying day, Western news sources could never agree on the spelling of the former Libyan dictator’s name. MSNBC just spelled it as “Khaddafy.” The N.Y. Times went with “Qaddafi.” Many have sided with “Kadafi.” 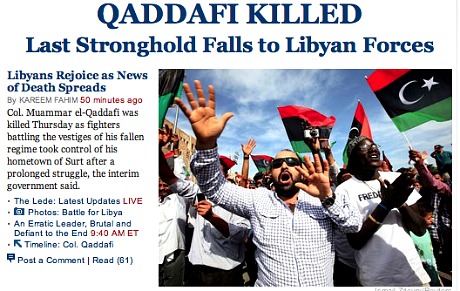 I’ve just heard from an MSNBC anchor that Qadaffi was found cowering in some kind of foxhole or drainage pipe after a gunfight, and that he said “don’t shoot!” when he was captured. If this is true, clearly one or more of his captors weren’t sympathetic. “Don’t shoot!” is like Frank Lopez begging Tony Montana to please not kill him in Scarface. If Qaddafi was a real man or at least a real hard-ass, he would have gone out like Mel Bernstein: “Fucking punks…can’t kill a dictator! Wait, wait, wait a minute…if you let me go I can fix this up. Fuck you!”