N.Y. Times reporter Brooks Barnes has reviewed the Sundance 2012 offerings and concluded (as I did before posting a summary on 12.29) that many of the narratives (including those contained in the docs) are about meandering, vaguely gloomy dysfunctional situations of one kind or another….the Tiny Furniture syndrome writ small, medium, large and extra-large.

“Many [Sundance] movies, about 25, look at 30-somethings whose lives have come apart for one reason or another — divorce, drugs, depression — and who are trying to get back on track,” Barnes reports. “At least eight fall squarely into the category of ‘America is broken.’ Four films gaze intensely at corporate greed [and] at least 14 selections look at moral decay.”

“I see a lot of movies in this year’s festival that aren’t made to be crowd pleasers but are instead made to say something about the moment,” Tom Bernard, the co-president of Sony Pictures Classics and a longtime festival attendee, tells Barnes.

In other words, we’re back in a Park City realm summed up by that immortal Victoria Wisdom line, “Sundance spelled backwards spells depression.”

Four years ago MSN’s James Rocchi said the following: “People mock ‘Sundance films,’ or joke that ‘Sundance’ spelled backwards is ‘massive depression. The reality of the matter is that if mainstream film offers us escape, independent cinema offers a necessary escape from escapism. Movie characters don’t seem to worry about paying the bills; most moviegoers do.”

I have some errands to attend to before catching my 4:30 flight to Salt Lake City so that’s all until I hit the airport, and maybe not until I hit Park City.

A restored version of William Wellman‘s silent, Oscar-winning Wings (1927) was screened last night at the Academy. Free copies of the new Wings Bluray were handed out. A friend says the black-and-white film had some color tinting, but the overall film was not, he reports, sepia-toned, as DVD Beaver’s screen captures plainly indicate. The audience clapped when 25 year-old Gary Cooper did his one scene cameo as Cadet White. 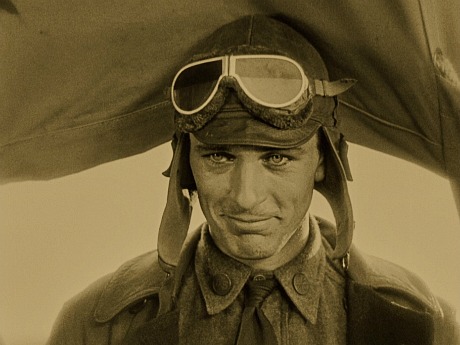 There’s probably not much difference, tonally-speaking, between Barry Bostwick‘s Franklin Delano Roosevelt and Brad Pitt‘s Lt. Aldo Raine in Inglourious Basterds. Flagrant caricature can work for a trailer, but it’s always hard to take over 90 or 100 minutes if every character in the film is doing this. Ludicrous material has to be played straight or you’re dead. Look at John Landis‘s Schlock, a gorilla-on-the-loose comedy that’s clever and amusing because Landis (who directed and starred) did everything he could to not “announce” that he was spoofing. He directed the actors like they were in something written by Hecht and MacArthur.