You don’t want to hear about the lethargy and gloom affecting Sasha Stone and myself during today’s Oscar Poker recording. Here’s a stand-alone mp3 link.

Deadline‘s Pete Hammond attended Monday’s Oscar Nominee luncheon, and noted in his report that Max Von Sydow, Best Supporting Actor nominee for Extremely Loud & Incredibly Close, got the biggest applause of all when he walked to the podium for his certificate of nomination. An indication of a possible upset victory over the favored Christopher Plummer, or a gesture of respect for a 50-year veteran?

The next two biggest-applause winners, says Hammond, were The Help‘s Best Actress nominee Viola Davis and A Better Life‘s Best Actor nominee Demian Bichir. I’m 94% convinced that Davis has the Best Actress Oscar in the bag, but Bichir’s applause, I’m guessing, was about two things — admiration for his performance and a backslap for having landed a nomination grass-roots style (i.e., on the cheap). I’ll do backflips if Bichir wins. He probably won’t, but what a nice dream.

Update: I’ve heard some disagreement about the level of Von Sydow’s applause. The Hollywood Reporter‘s Scott Feinberg puts it as follows: “By my ear, the loudest applause of all went to The Help‘s best actress nominee Viola Davis and best supporting actress nominee Octavia Spencer, both of whom were already regarded as the favorites in their respective categories.

Viola Davis is always playing characters defined by their work — social worker, CIA agent, bad mom, domestic maid, space engineer, nurse, cop, policewoman. Her next two roles will be (a) a librarian helping a couple of kids deal with hauntings in Beautiful Creatures and (b) a genius recruited by the government to help defeat an alien insect race in Ender’s Game. In short, she’s in a rut.

The solution is that she needs to play a woman defined by emotion, preferably by sex and passion. Davis is 46 and if she’s going to play a role of this type, she needs to do it soon.

I mentioned this to Sasha Stone a couple of hours ago as we recorded another Oscar Poker, and it hit me that a great opportunity would be for Davis to play the maid — a sexual maid — in an American remake of Too Beautiful For You. The 1989 French original, directed by Bertrand Blier, is about a BMW car dealer (Gerard Depardieu) cheating on his beautiful wife (Carole Bouquet) with his ordinary looking temporary secretary (Josiane Balasko).

The American remake could star Brad Pitt as the car dealer, Angelina Jolie as the wife and Davis as the maid. The idea wouldn’t be that Davis is “ordinary looking” as much as an attractive but unconventional choice as an extra-marital romantic interest, certainly by classic standards.

From the director whose name is synonymous with soulless flashbang filmmaking of the lowest order, a romantic action-comedy in which Reese Witherspoon has to choose between two hot-shot suitors who happen to be spies. On the left is good-looking smoothie Chris Pine (i.e., Captain Kirk) and and on the right is Tom Hardy, a subtle and intelligent actor who’s nonetheless played three famous animals so far — Bane, Bronson and a hulking MMA fighter in Warrior. 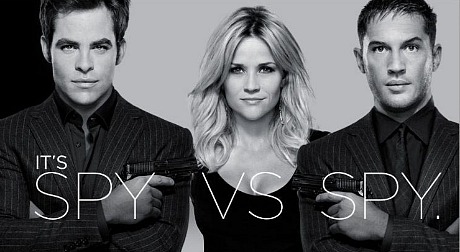 Who is cuter? Who will be the better provider? The better dad?

Does Reese test-drive them both, so to speak, or is this a film about windowshopping? Apart from all the action crap, I mean. Does Witherspoon have it in her contact that her character will only windowshop in films of this nature? She’s a woman and a mom who’s invested in upstanding values so I wouldn’t be surprised. But what kind of traditional-values woman goes out with two guys at the same time?

This Means War opens in only eight days, and on a Tuesday — 2.14 (i.e., Valentine’s Day). I’ve asked about a screening, but it’s unlikely that anything positive could come from my seeing it. I hate all things McG.

One of the most historic red-carpet interviews of all time happened when Bert Parks, a glad-handing showbiz whore, interviewed director Joseph L. Mankiewicz before the June 12, 1963 premiere of Cleopatra, and got these three quotes: (a) “You must know something I don’t” (in response to Parks calling the film “a wonderful, wonderful achievement”), (b) “Everything connected with Cleopatra is beyond my control at the moment” and (c) “I feel like the guillotine [is] about to drop.”