Support on Patreon Follow @wellshwood
31 Comments
Faced With “The Other”

Last night, or roughy 29 hours ago, Hitfix‘s Drew McWeeny had a gloriously passionate encounter with, to go with the flow of his descriptions, a gauche, insensitive, moronic and deeply offensive woman during a press screening of This Is War. This is the essence of what he said to her in his mind:

“When you go to a movie theater and you treat it like it’s your living room, sharing every horrifying spasm of that flaccid muscle occupying space between your eyes, you have to understand that it is intolerable. I suspect you made a choice tonight that your enjoyment was more important than the enjoyment of anyone else in that theater, and that you routinely make that same choice. I don’t believe anyone is as horrible as this woman was without being firmly aware of it. So I’m asking…on the record… how do we handle this differently next time?

“And even if you’re not that particular person, let me throw the question out to all of you on a larger scale. What do we do? What is too much, and what recourse is left to us at this point? If I was at the Drafthouse, I would have simply raised a card and watched the Drafthouse staff take tangible physical pleasure in the destruction of the simpleton, but unfortunately, not every theater is the Drafthouse. Even in LA, even in theaters where they charge a premium, there is no venue that will spend real energy removing a problem from the theater. They treat all theatergoers as equal, and it would take a criminal action to get them to step in and actually do something.”

In the David Mamet-authored script for The Untouchables, Sean Connery‘s character says something to the effect of “if you want to stand up to and possibly destroy evil, you have to become evil.” When you’re sitting next to an animal in a movie theatre — a sociopathic animal who won’t stop talking incessantly and who won’t stop pushing her naked and most likely un-pedicured feet against your upper leg — you have to become an animal yourself if you want to put a stop to this. You have to throw caution to the wind and give this woman a commensurate response by pouring a 32 ounce drink over her head and into her lap.

You’ll be thrown out of the theatre — make no mistake. You’ll be the one at fault. You’ll be the one who may have to answer to the police when the theatre manager calls them. You’ll be the one who will lose esteem and possibly the respect of your peers. You won’t come out of this altercation in any kind of good place. But the offending woman, make no mistake, WILL know the sensation of being soaked by a 32-oz. Diet Coke. She WILL know what it is to feel, on her head and on her lap, the Wrath of the Just. For McWeeny, whom I’ve known for a good while, is a just fellow. He is moderate and disciplined and respectful of convention but impassioned — a thoughtful and devout Film Catholic who knows how to write with real feeling, but who respects decency in all its forms, and what the world requires of decent people.

I was wandering around Hollywood Ameoba last night when I was slightly jolted by the sight of a $35 price tag on the Criterion Godzilla Bluray. I always buy Amazon these days, but I go to Ameoba to wander and dream and meditate. How good could Godzilla, a 1954 black-and-white film, look and sound to be worth $35? Even by Criterion standards it should retail for $20, tops. The Amazon price is too much also — $27 and change. The superfluous Raymond Burr version is included, but still. 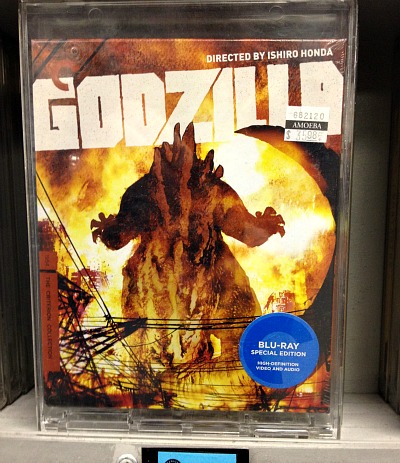 Why didn’t the friends of the late Bingham Ray arrange for a simultaneous New York and LA double-header memorial — one at Manhattan’s Paris theatre (which happened today) and the L.A. version happening at Busby’s (5364 Wilshire Blvd, between Cloverdale and Detroit), which is set for next Friday, 2.17? Probably due to an audio-visual presentation that can only play one place at a time. Indiewire‘s David D’Arcy has written a nice story about the New York event. 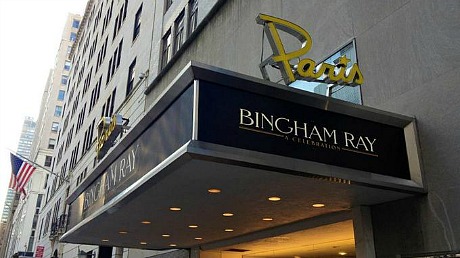 It’s funny, but during all the years I knew Ray we never compared notes about working for Sid Geffen in the late ’70s. Ray worked as a projectionist at the Geffen-run Bleecker Street Cinema in ’80 or thereabouts, or so I recall. This wasn’t long after I was toiling as the manager editor of Sid’s Thousand Eyes Cinema Guide. I’m sure we crossed paths but for whatever reason we never talked about it. That’s because neither of us really let our hair down and “talked” to each other, ever. We would spar and laugh but never share. Ray once called me “the Devil himself,” which I always thought was a bit harsh.

Nominees for the Best Animated Feature Oscar are almost always the same hip family ghoulash. Mostly Pixar or DreamWorks-produced, big distributor, voiced by big-name actors, big budget, aimed at kids and adults. Even when they’re from outside the U.S., like A Cat in Paris, they still feel like typical family-friendly fare. Which is why it’s pleasing that at least one of this year’s nominees — Fernando Trueba and Javier Mariscal‘s Chico and Rita — doesn’t do the usual usual.

It’s an adult Cuban jazz romance that spans decades and involves a love affair between a man and a woman who actually smooch and disrobe and have sex in the early stages (a huge commercial no-no in the animation realm). The animation is primitive on one level but refreshingly different on another — it’s drawn to a different drum. And it has a sweaty, sensuous soundtrack, composed by Cuban pianist Bebo Valdes with additional tunes by Freddy Cole, Dizzy Gillespie, Cole Porter and Thelonious Monk.

I didn’t feel patronized by Chico and Rita. I felt i was watching…hell, I was watching something that actually dared to stand outside the family-friendly arena. But charmingly, winningly.

Chico and Rita can’t win the Oscar, of course. The winner has to be the amusing, financially successful Rango! Gore Verbinski‘s Rango! It’s a decently made thing, for one. And it’s got Johnny Depp as a lizard (kewl!) and it’s an hommage to Sergio Leone films and shit. It’s the hip thing to stand by if you want to be hip, and who doesn’t? Plus Verbinski and Depp are really loaded from their Pirates of the Caribbean profit-share payments and…well, it’s hard to not award a film made by a couple of really rich guys, y’know?

It’s all a rigged game, it always stays the same, the fix is in, the rich get richer, etc.

The only thing that threw me about Chico and Rita is that it’s been playing the festival circuit and commercially overseas since 2010, and yet it took the better part of two years to finally open in the States (i.e., today). The other thing is that it feels a little bit odd that an adult animated film is being distributed by GKIDS Luma Films, which has an association with kiddie movies. GKIDS president, Eric Beckman, runs the New York International Children’s Film Festival. 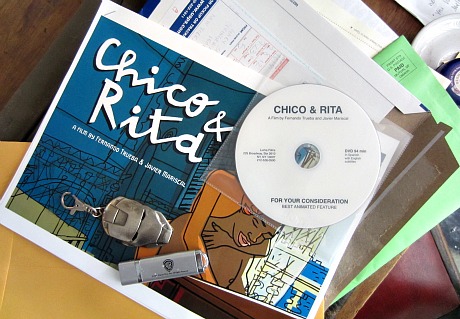 I spoke to Beckman about this a couple of days ago, and he said this is why he added the name “Luma” to the company title — it signals a separate interest and attitude.

“We didn’t pick up Chico and Rita until recently,” Beckman said. “We saw it at the 2010 Toronto Film Festival. We chased the damn thing for a year, talking mainly to Cinetic, holder of US rights, and getting nowhere. We finally just called producers of the film directly and we had a deal signed in two weeks. That occured last September, or five months ago.”

Chico and Rita opens today at the Angelika on Houston Street and then on March 9th in Los Angeles.

“I love films that take chances,” Beckman said, “and so far Chico and Rita seems to be playing really well with general audiences. It’s not a little kids’ film, and the music is amazing and it’s a big epic thing, spanning 60 years…it has a lot in common with The Artist and old MGM musicals.”

Let’s hear it for Cuban cartoon characters who play music and smoke cigarettes and get rousted by the cops and walk the sad streets and endure the loneliness and all that other classic adult stuff. Because it doesn’t happen often enough.

In the view of Film Business Asia‘s Derek Elley, Jiang Wen‘s Let the Bullets Fly (Variance, 3.2) is “a richly entertaining Oriental Western anchored by a well-honed, ironic script and terrific performances.” The trailer tells me otherwise. It tells me it’ll be agony, and that the only way I’ll stay to the closing credits is if I’m strapped to a theatre seat with Clockwork Orange eyelid-clamps, etc.

Who would’ve suspected that a single shot from a rifle could not only derail a large train car being pulled by a team of horses along a train track, but cause it to flip over end to end? The script of Let The Bullets Fly reportedly went through 30 drafts before Jiang Wen was happy with it, and he goes with a ludicrous action gag like this?

This, in a nutshell, is why I despise Asian action cinema, and why I’m completely at peace with never watching any Asian action film ever again.

I’m also telling you that critics who do giddy cartwheels over this kind of flamboyant, self-satirizing, high-style Asian grindhouse fare cannot be trusted. I know a lot of these guys and have heard that many have taken part in a secret annual Asian Film Society ceremony and sworn obedience to the rule, ratified in the early ’90s, that almost all Asian action cinema gets a pass for its vitality and verve. If you aspire to be a member in good standing of the Brotherhood of Dweeb, you WILL give films like this a stamp of approval and you will DEFINITELY NOT say stuff like I’m saying here. If you don’t, you’ll have to deal with a lot of disapproval and God knows what else.

Let the Bullets Fly opened in in China in December 2010 “and grossed 730 million yuan ($111.1 million US) in box office, becoming the highest grossing domestic film in China’s cinematic history,” says the Wiki page.

“Set in China during the warring 1920s, the bandit ‘Pocky’ Zhang Mazi (Jiang Wen) and the other bandits ambush a con artist (Ge You) who is posing as the Governor Ma Bangde with his wife. Zhang then proceeds to Goosetown taking Tang’s place as the local governor. Tang becomes his counselor, while Tang’s wife poses as Zhang’s wife. Zhang’s aim at this position is opposed by local mobster Master Huang (Chow Yun Fat) who lives in his fortified citadel overlooking the town,” blah blah crap crap.