Support on Patreon Follow @wellshwood
2 Comments
Cut It Out

A few days ago Bluray.com’s Dr. Svet Atanasov wrote that Criterion’s Bluray of The Last Temptation of Christ “represents a massive upgrade in quality over the old DVD release Criterion produced in 2000…the high-definition transfer boasts fantastic organic qualities…during close-ups detail is excellent while the panoramic shots look notably fluid..contrast levels have also been stabilized, and as a result the desert sequences look notably stronger.” 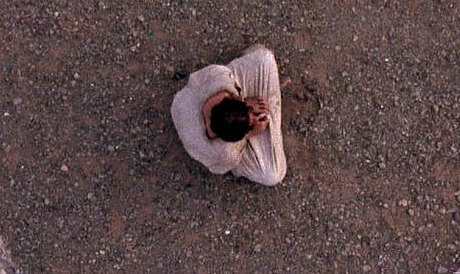 The tone of Davis Guggenheim‘s Obama tribute piece, released earlier today, isn’t slick or silky or trumpeting, but quiet, reflective…almost meditative. The writing is plain, concise and nicely shaded. Okay, the doc ignores 90% of “the story,” but it seems to focus on what mattered. It doesn’t lie.

Hunger Games opens on Friday, 3.23, or at 12:01 midnight that morning. I won’t be seeing it in Los Angeles until Monday night. Boxoffice.com is projecting an opening Weekend tally of $95 million and a total domestic gross of $235 million. Fandango says more than 1000 showtimes are already sold out across nationwide, and that theater owners are adding showtimes — some as late as 3:00 a.m. on Friday morning — to meet the demand for tickets.

I finally saw Lee Hirsch‘s Bully (Weinstein Co., 3.30) last night, and guess what? The f-bomb hassle that Hirsch and the Weinstein Co. are involved with is just a lot of smoke and hot air. Seriously — there’s nothing to get alarmed or excited about. It’s all a lot of needless hooey, the petition being circulated by Change.org and Katy Butler included.

Hirsch, the Weinstein Co. and Ms. Butler have been trying to get the MPAA to change its R rating to a PG-13. They’re claiming that the f-bombs are necessary for the integrity of the film because they represent the hateful attitudes directed at the victims of bullying in the film. Or something like that. The MPAA has predictably dug in its heels, and the Bully team is saying it’s important for school-age kids to see the film but they won’t be allowed to if it’s rated R, hence the ratings battle.

But the whole issue — and I’m saying this with sincere admiration and respect for Hirsch and the film, which is very well done and quite touching — is utter bullshit because f-bombs are meaningless in the context of what’s shown and the flow of the film and the music and the abundant feelings. This is a doc about cruelty, and the measure of that is in the stories of the victims (two of whom have taken their own lives) and in their faces in photographs and home videos, and especially in the faces and hearts of their parents and brothers and sisters.

Hearing an f-bomb or three or five is absolutely meaningless in the midst of all this tragedy and grief.

Honestly and truly I didn’t hear the other five and even if I had (or if my colleague had) it wouldn’t matter. The f-bombs are said by kids during some school bus footage, but the sound is from an iPhone or flipcam video so the aural quality is lousy. It doesn’t matter anyway. This film is about stopping cruelty and raising the consciousness of parents who are too stupid or bull-headed to understand that they need to make sure that their kids don’t make other kids miserable by constantly harassing and teasing and slapping them around.

The Weinstein Co. should have caved on this issue immediately. Bully is an important film that needs to be seen by younger kids everywhere, and it’s absolutely idiotic to insist on keeping six f-bombs on the soundtrack as it means nothing to hear them or not. Get rid of them or overdub them but kick this issue to the curb and don’t let someone’s obstinacy get in the way of this film being seen by kids and parents who really need to see it.

14 Comments
Let’s Not Get Carried Away

The first positive buzz for 21 Jump Street (Sony, 3.16) began to swirl around a month ago, and now we have the 88% positive Rotten Tomatoes response and…okay, the Metacritic guys are only at 68. But when a high-energy goofy spoof thing works, as this one mostly does, you need to ask how much of is due to the sheer rambunctious energy and chemistry aspects and how much is due to actual brain-soul ingredients.

So you need to take two steps back and have a couple of sips of cappucino and look out the window and pet your cat before committing yourself. Take it easy.

A couple of high school guys — one smart and dorky and a social failure (Jonah Hill), the other a broad, hunky smoothie who wasn’t too good with the grades (Channing Tatum) — are now bumbling police recruits without a clue, which is to say inexplicably careless and stupid. That leads…you know what? To hell with the synopsis because this movie is just a lot of misfit elements thrown together like a deck of cards flying all over the place without any real Billy Wilder and I.A.L. Diamond-like thought given to any kind of harmony or undercurrent besides the reversal-of-high-school-fortune thing.

But it works because the vibes are so good that the movie knows it doesn’t need an audience to go along with it. It’s not trying to be funny — it’s funny because it is. And it works because directors Phil Lord and Chris Miller, and cowriters Jonah Hill and Micheal Bacall and the cast convince you that it’s working for them, even though it can be easily picked apart and shown to be deficient. They make the rules and get you to go along.

Much of 21 Jump Street is really silly stuff, and that’s mostly a good thing. (And sometimes not so good in a sloppy way.) My favorite tag line so far comes from a review by Time Out‘s Keith Uhlich: “Abbott and Costello‘s Lethal Weapon.” Warning to audiences: don’t see 21 Jump Street twice. See it once and let it go. Just a feeling.

A lot of comedies are self-regarding wanks, but 21 Jump Street jokes about the fact that it’s joking about itself. It’s two or three layers removed from any semblance of sincerity. And that, oddly, is why it’s enjoyable. The reason it’s engaging (except for the last 25 or 30 minutes) is because you can sense an impish rogue intelligence coming from star and co-writer Jonah Hill, and because Hill’s chemistry with Tatum is loose and agreeable and stupid.

It needs to be clearly understood, however, that 21 Jump Street isn’t epic Superbad-funny because it’s operating out of a genre straightjacket (i.e., ’80s TV reboot, necessary cop tropes, action finale) and can only wiggle around so much.

I only know there was an old-fashioned Times Square-like sign flashing above the screen at the AMC Century City plex, and that it kept saying “this is vaudeville, man…a jape of a jape of a late ’80s TV show…but a clever one that keeps popping, and we know it….pop-poppity-pop-pup…pop-pudalop-pudalop…pop-pup. We know how to do meta slapstick and we were smart enough to weave in a clever little theme about going back to high school and this time getting it right. And the fun of the onetime dorky nerd turning into the mellow hip-cool guy when he returns to high school as an undercover narc, and the other guy…the smooth, swaggering jockster…not doing as well in a p.c. 2012 high school as he did in the early aughts. Like, at all.” All of that and more was flashing left to right on the message screen.

The last half hour devolves into amped-up slapstick and standard car chases and shoot-outs, and of course there’s a cameo appearance by a couple of guys you might know.

Tatum strikes me as being overweight for a young guy in really good shape. He has a massively thick neck (like an fucking ox) and a wide face, and if he doesn’t watch it he’ll turn into Alex Karras or Alan Hale, Jr or Aldo Ray by the time he’s 38 or 40. Get on the right diet now or else.

And Brie Larson…I don’t know what to say. She’s not my idea of hot (she was in Scott Pilgrim) but yes, she’s mildly intriguing in that she conveys values and an inner life of some kind. But if I was in high school and she was in my algebra or ancient history class? I might be friendly with her but I wouldn’t be scheming to go out with her.

21 Jump Street was shot in and around New Orleans, but you’d never know it.