I put these on the back bumper every Presidential election year. I get them done at Kinko’s on Westwood Blvd. $32 bills and change for six. An old tradition.

I’ll be sitting down with The Hunger Games about 90 minutes hence, but right now I’m having a WTF reaction to the current Rotten Tomatoes reviews. It’s running 100% as we speak, although a critic friend who’s seen it says this doesn’t calculate. “[The film] doesn’t want to make you poke your eyes with scissors or anything,” he says, “but come on.” So what happened to “toned down for young female demo” and “good enough, somewhat chickenshit“?

“A thrilling, intelligent, deeply-felt movie that does not play by the typical rules of franchise building in modern Hollywood.” — Drew McWeeny, Hitfix. “As thrilling and smart as it is terrifying. There have been a number of big-gun literary series brought to screen over the past decade. This slays them all.” — Olly Richards, Empire. “As action, as allegory, as cinema, The Hunger Games is the best American science-fiction film since The Matrix.” — James Rocchi, Boxoffice. “The Hunger Games is that rarest of beasts: a Hollywood action blockbuster that is smart, taut and knotty.” — Xan Brooks, Guardian.

My critic pally says it’s “one of those unimaginative, let’s-recreate-exactly-what-was-on-the-page-while-watching-the-PG13-rating-and-count-our-money adaptations. I’m surprised Chris Columbus didn’t direct it. Lifeless, turgid, rote, irritating…whatever one may say of, say, James Cameron or Oliver Stone, they have never made a movie as crass and calculating as this one.”

This cover shot caught my attention last night as I was buying groceries at Gelson’s. I was mainly thinking, “This again?” 21 years ago that naked Demi Moore pic on the cover of Vanity Fair was a bombshell event. Before that point the words “naked”, “pregnant” and “sexy” weren’t exactly conjoined in the public mind. No longer. 2012 pregnancies are about pride, delight, celebration, serenity and…fill in the blank. But the “whoa” factor has left the room. 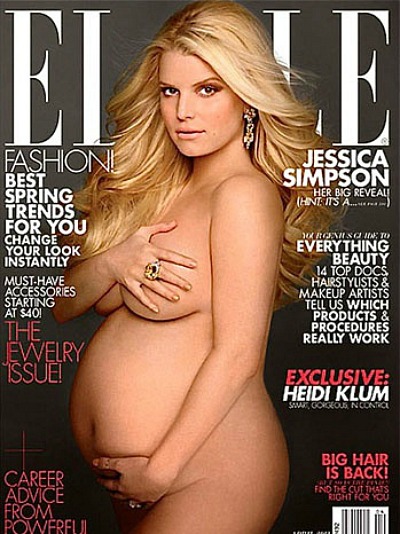 This is a ’80s Roger Corman film without the refinement. (Cannon was always afraid of t & a — they never went there.) And what a supporting cast! Christopher Lloyd, Ving Rhames, David Hasselhoff, Paul Scheer and Cu Gulager. Dimension will release Piranha 3DD on June 1st.

Woody Allen‘s latest, an anthology piece set in Rome, once had a great title — The Bop Decameron. But under-educated people the world over said they didn’t understand what it meant, and so Allen went with Nero Fiddles — a mildly dreadful title. But the under-educated didn’t understand that one either. So now the film is called To Rome With Love — surely the drippiest that Allen has ever gone with in his 40-plus years of filmmaking.

“The film’s former title, Nero Fiddled, while an appropriate and humorous phrase in the U.S., is not a familiar expression overseas and many international territories preferred a more globally understood name,” explains a Sony Classics press release.

I’m sorry but what does that mean? They don’t have schools overseas? What sales reps from what inernational territories were pleading with Woody to dumb it down?

A movie title can’t be too arcane or obscure, of course, but artists should never descend to the water-table level of common comprehension. Let the unwashed masses come up to your level, dude. You’re the artist. You prepare the food, and the rabble sits down to eat it. To hell with ’em if they can’t figure decipher the meaning.

How clueless do you have to be to not know the expression “Nero fiddled while Rome burned”? If you don’t know that one then you’ve probably never heard the one about Julius Caesar crossing the Rubicon or George Washington chopping down the cherry tree or Abe Lincoln splitting rails or the expression “it’s Greek to me” (a line from Shakespeare’s Julius Caesar) or whatever.

To paraphrase a line from the late Hunter S. Thompson, “Has the international community descended to the level of dumb beasts?”

Or is Woody letting his sister, Letty Aronson (who produces his films and deals with funding and distribution), push him around in his old age? Can anyone imagine the Woody Allen of the ’70s, ’80s or ’90s saying, “Oh, the uneducated masses don’t understand what my title means? I’ll dumb it down then…no problem”?

Snow White (Kristen Stewart) as a pint-sized Bruce Wayne with a touch of Frodo Baggins, learning the art of war from a studly handsome assassin who takes pity (Chris Hemsworth), and then waging a military rebellion against the evil, sometimes naked queen (Charlize Theron)…swords, shields, “Hyaahh!!,” sweat, magic, CG, moisture, fireballs…a full serving of the usual Hollywood fanboy/fangirl stuff. A stylistic twist or two, no apparent surprises, same old fast food. Or so the trailer indicates.

“Who are we kidding? We’re kids. We get to go play. We’re not curing cancer…we’re just [here] to entertain you guys” — Theron at Wondercon.

Universal is opening Snow White and the Huntsman on Friday, June 1st.