Support on Patreon Follow @wellshwood
21 Comments
Honey, You Need To Do Me

“I just can’t do that”? Meryl Streep‘s character, a baby-boomer woman in her early to mid 60s, a veteran of the hippie era and the Me Generation ’70s, has never performed oral lah-lah on her husband, played by Tommy Lee Jones?

Sony Pictures presented its 2012 slate at Cinemacon five or six hours ago. I don’t want to go out on a limb, but apart from Kathryn Bigelow and Mark Boal‘s Zero Dark Thirty, which wasn’t even mentioned, the Sony guys don’t seem very interested in adult-appeal, review-driven films this year. Or they’re persuaded that idiot fare makes exhibitors feel soothed and taken care of because it sells more popcorn or whatever. Either way the reels shown on the Collisseum screen inside Ceasar’s Palace made it seem as if they’re aiming low and predictable.

So for me the Sony product reels didn’t cut it except for two semi-goodies — Marc Webb‘s The Amazing Spider-Man and Sam Mendes‘ Skyfall, the latest 007 film. Otherwise they mostly showed ultra-primitive, power-slam, bass-thump CG stuff for the under-educated simians, schmoes, ESPNers, what-the-fuckers, gamers and others whose taste buds have been systematically coarsened and lowered over the last 20 or 25 years, which is roughly when theme-park movies began to be embraced big-time by the major studios.

Aside from Hope Springs, a light-hearted septugenarian sexual therapy comedy by way of a marital relationship flick with Meryl Streep and Tommy Lee Jones, all I saw, felt and heard today was THUMP, whuh-DUMP!, whoossshhh, bluh-BOOM! BOOM! Buh-buh-BOOM! CANK-CANK-CANK!….bah-dah-bupp-pop, bah-dup-dup, baddah-bup…screeshhhhhh!!…ROWRRLLL and a WHUMP and a WHOOM! with about 18 shots of guys falling from very high buildings and never once slamming into the pavement and instantly becoming a splattered Big Mac because anyone can fall from any height in a big-studio movie these days and escape injury….c’mon, you know that!

A couple of exhibitors or conventioneers or whatever sitting behind me were delighted with all this. At one point a younger, dark-haired guy in a white Eurotrash shirt exclaimed “wow!” and then “whoa!” I immediately turned around and scowled at him and said, “What are you, an asshole?” All right, I didn’t say that but I turned around and scowled. At one point I said out loud to no one in particular, “Are they fucking kidding?”

To repeat, Hope Springs appears to be the one film besides Zero Dark Thirty that’s aimed at over-35s.

The point is that nothing looked all that great. Nothing really turned me on. It all felt like franchise gruel and formula deck-shufflings.

Even Spider-Man and Skyfall felt like the same old basic prime rib (or meat loaf), mashed potatoes, green beans and gravy on the side. How fresh can either be? Mendes is a class-act helmer and Andrew Garfield looks like he does a fine job as Peter Parker but a franchise film is a franchise film.

In fact, I think we were actually being shown pieces of one big long CG-idiot action film, lasting 12 or 13 hours, called Son Of The Amazing Total Skyfall Rush With Aliens.

This is the studio that produced and distributed Moneyball last year, but boy, you’d never know it. The Sony voices that said “let’s make as much money as we can by investing big-time in tentpoles and appealing to the under-25 morons and shovelling out the same old action-fantasy slop, using the same beats and the same CG and the same old bullshit comic-book dynamic” obviously ruled.

Here’s a pretty good description of the Skyfall reel or trailer or whatever from Coming Soon‘s Ed Douglas.

Martin Scorsese has said this many times before, and so have others who care about preserving our cinematic history as best we can. But it was great to be sitting in a cavernous ballroom (two or three football fields wide) inside Caesar’s Place an hour ago and hear Scorsese say it once more: “We have an obligation to our culture to preserve it.” By “it” he meant all those films that have found a certain exalted or venerated status which need to be preserved and restored.

The corporate guys running Hollywood talk a nice slick game, but many of them don’t care too much about preserving anything. Most care about their earnings and assets. Most of them are wolves in the forest, and not much more than that. Okay, some corporates care and are standing up and doing the right thing as best they can. But would Brad Grey have committed the Paramount funds to restore and preserve the Godfather films if Steven Spielberg hadn’t urged (i.e., pressured) him to do so? Why di dit take Paramnount so long to commit to a Shane restoration for a Bluray? Why is Sony Home Video still stalling on releasing that From Here to Eternity Bliuray that they prepared in 2009?

A fund-raising email from the irrepressible James Carville just arrived, and reads as follows: “After Mitt tried to steal my line, you know I have to call him out. In Romney’s speech bashing President Obama last night, he said, ‘It’s still about the economy, and we’re not stupid.’ Yeah, it still is about the economy, stupid. It’s about how hucksters like Mitt crashed it, the middle class paid the price, and the top 1% got more tax cuts. It’s also about Republicans going to war on women, trying to cut seniors off their Medicare and all the rest. Let’s beat these guys.” Yeah!

During a just-concluded Cinemacon panel called “Frankly Speaking: The Ever-Changing World Filmmaking Today, Tomorrow and Beyond,” moderator Todd McCarthy asked Martin Scorsese what his learning process was on shooting Hugo in 3D, and part of his answer was that Alfred Hitchcock‘s Dial M for Murder offered inspiration about “how to go” with 3D. Director Ang Lee also particpated. 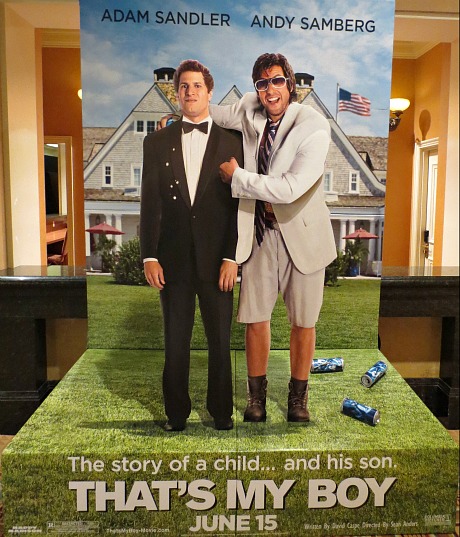 What kind of Las Vegas tourist would want to visit a chapel? A hardcore gambler on the skids? I don’t think they have chapels in Monte Carlo casinos. Welcome to the hypocrisy and indigestion of American Christianity. 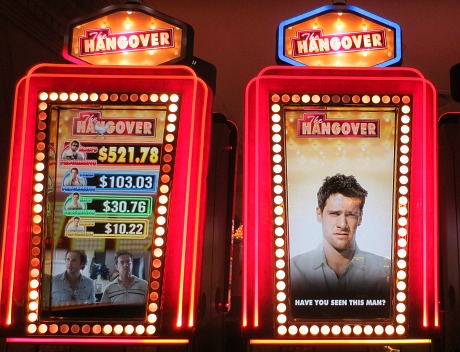 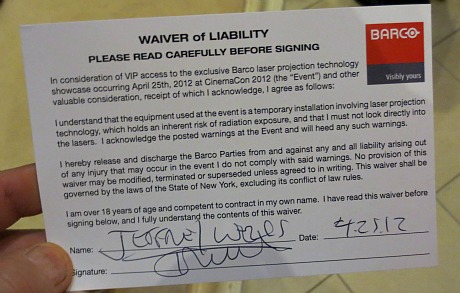 A form you had to sign before attending this morning’s Barco Laser Projection demonstration inside the Collisseum. Ridiculous. There were no laser beams flashing around the theatre when the show began. The laser light is entirely housed with the digital projector. Laser projection can generate 20 foot lamberts or higher. It’s brilliant — one solution, certainly, to dark 3D. 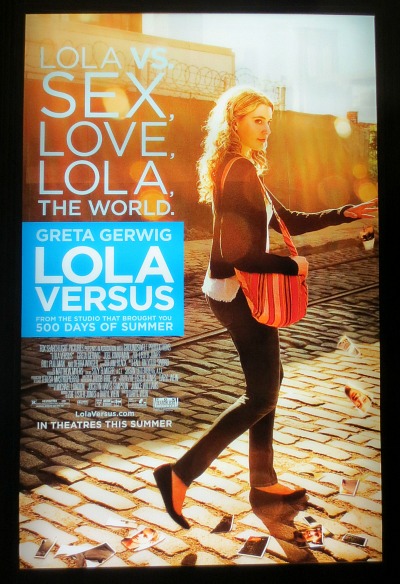 As regulars know, the fascinating “Ira Parks” has been doing an HE commenting routine in which he becomes (i.e., enters, takes possession of) significant HE commenters and voices their thoughts and ruminations. Ironic, layered, meta on meta stuff. Yesterday and for whatever reason he ran a little fictitious riff about MSN’s James Rocchi having been arrested in Las Vegas…WHICH DIDN’T HAPPEN, IN LARGE PART BECAUSE MR. ROCCHI ISN’T EVEN HERE.

Then Parks posted a “Jeffrey Wells says” follow-up about Rocchi considering legal action against the Las Vegas police department as well as myself. In response to this Rocchi got in touch this morning to castigate me for writing this. He saw my name and didn’t realize it was Parks. C’mon!

I didn’t write anything or know anything. I quickly skimmed the comments last night and frankly wondered if Rocchi, a mild-mannered, business-suited diplomat if I ever met one, might have actually been popped for something, but then I crashed around 1 am and then got up this morning and went to my first Cinemacom event.

But let’s put a stopper on this right now. The Rocchi thing was fanciful fiction — dry humor taken to a new bizarre-pretend level — and Rocchi’s anger and threatened libel action has become a kind of online version of people panicking in 1938 when they heard Orson Welles‘ “War of the Worlds radio show. None of it is real, I swear. We’ve gotten lost in the bonfire of our online vanities.

I hereby apologize to James Rocchi and want everyone to completely & fully understand that he’s in Los Angeles and was never in Las Vegas and has NEVER BEEN POPPED BY THE LVPD for anything, ever. It was a joke…please.