Directed by Derick (brother of Dirty?) Martini and based on a novel by Andrea Portes, Hick is about a none-too-bright girl (Chloe Grace Moretz) who “runs away to Vegas to find a sugar daddy”…Jesus. You can imagine the rest. Costarring Blake Lively and Eddie Redmayne. Pic will open in select theaters and be available on iTunes and VOD on 5.11.12.

I don’t know if I want to see another Back to the Future film, but this guy (name?) is obviously sharp, inventive and passionate. So if nothing else he could get a production gig out of this and…you know, be somebody’s whippersnapper. I love the way he exhales after finishing the riff. And by the way, it’s definitely flux capacitor and not flux capacitator. 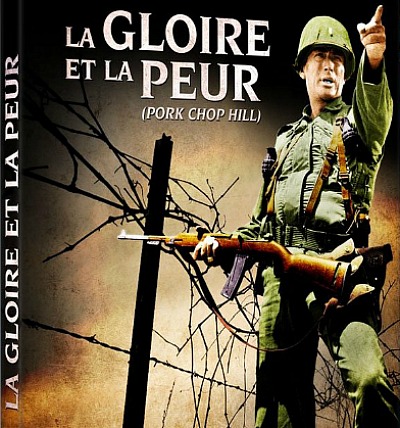 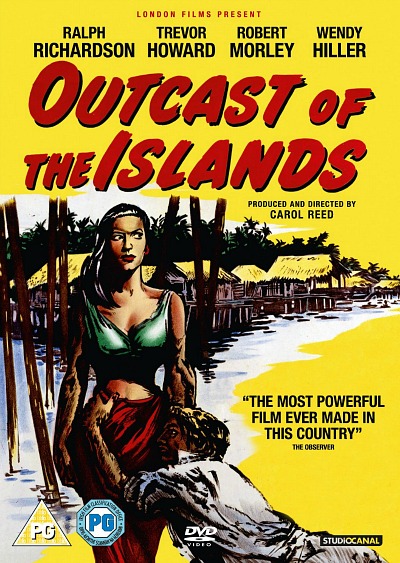 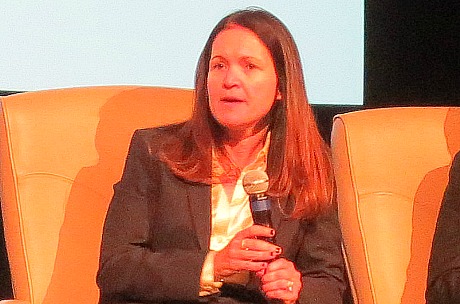 “The political part presents Joe as a fearsome dinosaur,” Brantley notes, “a fierce advocate of the war in Vietnam whose power begins its inexorable decline with the assassination of Kennedy. The play ends with the dawning of the Age of Aquarius, with Joe recoiling from the light like a vampire at sunrise.”

I had dinner with Lithgow in Cortina d’Ampezzo , Italy, almost exactly 20 years ago. I was doing a N.Y. Times interview with Sylvester Stallone during the filming of Cliffhanger, and it was suggested by the unit publicist that I should hang with Lithgow a bit. Lithgow didn’t say anything too specific, but the tone of his comments provided the first hint that Cliffhanger might be somewhat dismissable. 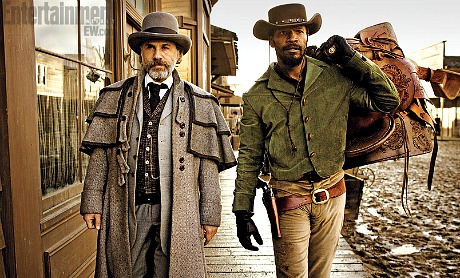 Pleae take note of the Entertainment Weekly logo in the upper left portion. That means they were given this photo as an exclusive.

Does Foxx think Django Unchained will be controversial?,” Breznican asks. “Naah,” says Foxx. “It’s going to be kind of a quirky but sorta mild-mannered, laid-back Monte Hellman-type film with nice long shots of pastoral western vistas and a kind of you-are-there historical verisimilitude with prairie dogs and snakes and coyotes howling in the night.”

I’ve read the script but here’s the EW synopsis: “After being sent to a chain gang after rebelling against his owners, Django is recruited by a German bounty hunter (Inglorious Basterd‘s Oscar-winner Christoph Waltz) to help him settle an old score. Django has information that Waltz’s Dr. King Schultz needs, so the German mercenary liberates the slave and promises that if he helps him kill the Brittle Brothers, Django’s old owners, he’ll make it worth his while.”

“He says, ‘I’ll kill ’em, and you’ll get some money and be on your way as a free man,'” Foxx tells Breznican.

The Brittle brothers? Is that like the Vega brothers only 150 years earlier?

“Along the way, the duo end up crossing paths with Leonardo DiCaprio‘s hammer-wielding character, a deranged plantation owner named Calvin Candie, who likes to make his toughest slaves fight to the death in gladiatorial combat. ‘Candie is a business man who owns a plantation called Candie Land, and that’s where my wife ends up being,’ Foxx says. To find her, ‘we have to get in good with Candy, by me playing a valet for Christoph’s character.’ 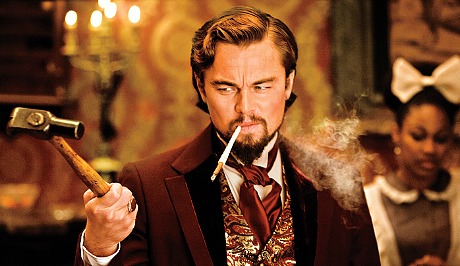 Leonardo DiCaprio as the hammer-wielding Calvin Candie — a mixture of Daniel Day Lewis’s Bill the Butcher from Gangs of New York mixed with Simon Legree.

“Candie Land”? Like an amusement park? How many employees? Is there a big “Candie Land” sign illuminated by candles at night? Did DiCaprio’s character get that name from a relative of P.T. Barnum? Does Mr. Candie sell hot dogs and popcorn and hard candy on the side?

“There’s a beautiful way [Tarantino] found for the characters to talk to each other,” Foxx explains. “It’s mindblowing. You’ve never heard it this way. You’ve seen movies deal with slavery or westerns that never dealt with slavery. Do it the safe way. This way is like…wow.”

Ultimately, Breznican writes, Django Unchained “is a story about the heart, and the way cruelty can destroy the things we love most.” Sorry but I kinda doubt that. I suspect that Django Unchained is ultimately about the movie references and spaghetti western memory threads in Tarantino’s head. All QT does (and all he ever will do) is riff on genre movies that he loved back in the ’70s and ’80s.

“All Django wants to do is get his wife,” Foxx concludes. “He’s not trying to cure or solve slavery. He just wants to get his life back.” So he and his wife can return to their home in a trailer park near Orlando and kick back with the brewskis and ESPN on the flat screen and the barbecue in the back yard and play with the kids and their pet alligator?

In April 2007 Tarantino told the Telegraph‘s John Hiscock that Django Unchained would be “a southern,” or a kind of spaghetti western set in America’s Deep South. He said he wanted “to do movies that deal with America’s horrible past with slavery and stuff but do them like spaghetti westerns, not like big issue movies. I want to do them like they’re genre films, but they deal with everything that America has never dealt with because it’s ashamed of it, and other countries don’t really deal with because they don’t feel they have the right to.”

So while Inglourious Basterds was a revenge-payback movie about making Nazis suffer for being anti-Semitic swine, Django Unchained is some kind of payback-revenge movie about American racism and slavery.