Benh Zeitlin‘s Beast of the Southern Wild is “something to sink into and take a bath in on any number of dream-like, atmospheric levels, and a film you can smell and taste and feel like few others I can think of,” I wrote on 1.25.12. “The emphasis is on sensual naturalism-wallowing — lush, grassy, muddy, oozy, leafy, stinky, primeval, non-hygenic, slithery, watery, ants up your ass — with a few story shards linked together like paper clips.

“It’s a poetic, organic, at times ecstatic capturing of a hallucinatory Louisiana neverland called the Bathtub, down in the delta lowlands and swarming with all manner of life and aromas, and a community of scrappy, hand-to-mouth fringe-dwellers, hunters, jungle-tribe survivors, animal-eaters and relentless alcohol-guzzlers who live there.

“The narrative, as such, focuses on six-year-old Hushpuppy (Quvenzhane Wallis) and her father Wink (Dwight Henry) and a third-act search for Hushpuppy’s mother.

“Wallis is a hugely appealing young actress — beautiful, spirited, wide-eyed — and she pretty much carries the human-soul portions of the film. But Henry’s dad, who cares for Hushpuppy in his own callous and bullying way, is a brute and a drunk and mostly a drag to be around, and after the fifth or sixth scene in which he’s raging and yelling and guzzling booze, there’s a voice inside that starts saying ‘I don’t know how much more of this asshole I can take.’

“Here comes the part of the review that the keepers of the precious Sundance flame are going to dislike. If you apply the classic Jim Hoberman ‘brief vacations’ concept of a great film not only being a kind of ‘sacred text’ but constituting a realm that a viewer would be happy to literally take up residence within, Beasts of the Southern Wild does not, for me, pass the test.” 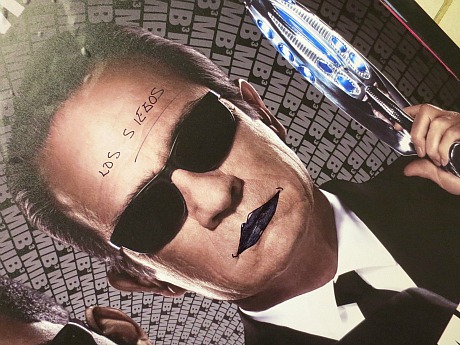 The subway defacers are starting to make themselves heard as far as Men in Black 3 is concerned. Does that mean something? No, of course not…but on another level, maybe. I see a poster defacement and a voice whispers in my ear, “A little something is happening here.” 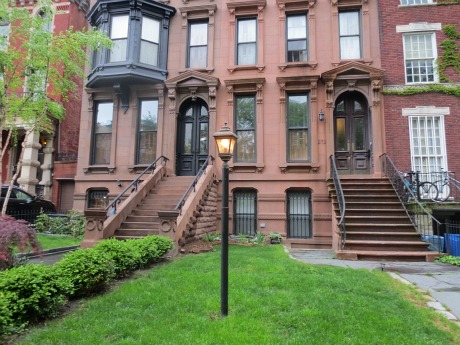 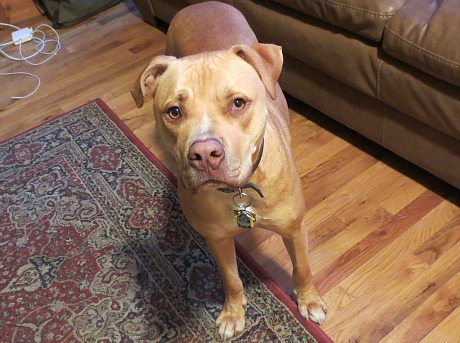 I don’t just exist. Well, I do…but I feel like I’m doing a lot more. Creating, “painting,” stirring pots, leaving a mark of some kind. Everyone is terrified that they might be just existing and nothing but. The ultimate mark of a nothing mediocre life. Does anyone anywhere think of him or herself as being as just plugging along and marking time? Alcoholics, maybe.

In the view of Village Voice critic Nick Pinkerton, Richard Linklater‘s Bernie “is that rarest of rarities: a truly unexpected film.

“Is it condescending to its small-town-life subject or sympathetic toward it? This hang-up precludes the possibility of a filmmaker holding two conflicting ideas in mind at the same time, just like we do. Such nonbinary thinking is necessary to approaching an oddity like Bernie, which, in its multiple perspectives, is all about irreconcilable facts and foggy motives, not least the contrary demands of forgiveness written in the Bible and the stern punishment written in the law books.

“In its ornery eccentricity, Bernie spits off more ideas than any American movie in many moons, and it’s not reassuringly conclusive about any of them. Cast and crew will be lucky to escape with their careers intact.”

The two-year-old Klown is about “two wildly inappropriate friends (Frank Hvam, Casper Christensen) animalistically running amok through the Danish countryside …awkward confrontations and unspeakable debaucheries…from exclusive brothels, hospitalizations, armed robberies and even prison, the three paddle downstream from one chaotic misadventure to the next culminating to a surprise sentimental portrait of friendship and a final shocking reveal, etc.
Theaters & VOD on 7.27.

“Maybe it’s the shock of the new, but the most exciting actor [in The Avengers] is Mark Ruffalo,” declares Village Voice critic Karina Longworth. “Ruffalo successfully refreshes the Hulk myth, playing Banner as an adorably bashful nerd-genius who, in contrast to the preening hunks on the team, knows better than to draw attention to himself.

“As a fellow top brainiac with dangerously repressed issues, Banner brings out a measure of complexity in Tony Stark that a tired-looking Robert Downey, Jr. — who was revelatory in the first Iron Man as someone forced to become part machine in order to realize his full human potential — can no longer muster on his own.”

So that’s Longworth, Boxoffice.com‘s Amy Nicholson and myself singling out Ruffalo as the coolest Avenger. Others?

I missed the Tribeca Film Festival screenings of Chris Kenneally and Keanu Reeves‘ Side By Side, a 98-minute documentary about the changeover from film to digital that premiered at last February’s Berliniale. Tribeca Film will open it sometime in August with screenings set for July, etc., but I’m trying to snag a screener today or tomorrow through a couple of publicist pals. If anyone knows anything, please reach out. I’m gone tomorrow night.

“Likely to prove utterly irresistible to geeks of all descriptions, but especially fest programmers, upscale broadcasters and anyone interested in the nuts and bolts of filmmaking, Side by Side examines the impact of digital technology on film,” wrote Variety‘s Leslie Felperin.

“Asking canny questions oncamera while also acting as one of pic’s producers, Keanu Reeves canvasses opinions from a truly impressive array of talents, including not just helmers like Martin Scorsese, Steven Soderbergh, David Fincher and Christopher Nolan, but also some of the industry’s finest lensers and below-the-liners.

“Although laid out with such clarity that any layperson could catch the gist of what’s being discussed, Side by Side is not afraid to get nitty-gritty about more technical matters, such as why the invention of Bell Labs’ CCD chip was so game-changing, how stereoscopy works or why a Red camera or a Sony F950 is so much better than a standard-definition rig (answer: It’s all in the pixels). Yet plenty of airtime is also given to those who prefer the aesthetic of photochemical stock, which, as helpful clips illustrate, still has a much wider dynamic range than digital.

“For other, less nerdy-minded auds, simply hearing great masters of the craft talk about their work with passion, specificity and acumen will be enough of a treat. Pic generously apportions roughly equal amounts of screen time to big names and lesser-known craftspeople such as ace editor Anne V. Coates, vfx legend Dennis Muren and top colorist Tim Stipan, who speak just as eloquently about the work as their more famous colleagues.

“Nevertheless, Joel Schumacher delivers possibly the pic’s funniest line when he sighs that the problem with instant playback via digital is that actors get obsessed not with their performances but with what their hair looks like.”

I realize that at 1:21 Sylvester Stallone is delivering a kind of tribute to a line spoken by William Holden‘s Pike Bishop in the opening minutes of The Wild Bunch: “If they move, kill ’em.” Except Stallone seems to be saying, “Jarapneem find ’em, kill ’em.” I’ve listened seven or eight times now, and that’s what it sounds like. I can’t crack it.

Whatever the plot, it’s an atrocious idea to have Arnold Schwarzenegger say “I’m back.” Ditto this Bruce Willis line: “You can’t let the contents of that safe fall into the wrong hands.”