Yesterday afternoon I walked over to Cinemania, a Berlin DVD store, and rented Nicole Kassell‘s A Little Bit of Heaven, the Kate Hudson ass-cancer love story that opened last Friday and got creamed by critics. I was expecting something grotesque, but was surprised to discover it isn’t all that painful.

It’s a fundamentally dishonest and treacly movie about making the most out of the fact that you’re about to die. The life-embracing “up” attitude that it’s selling is synthetic and calculated, and about as phony as a three-dollar bill. But once you get past that (or digest that), it’s watchable.

Hudson performs reasonably well as Marley, a New Orleans advertising exec who experiences emotional and spiritual growth when she learns that she’s got advanced colon cancer and has only a few weeks to love. Gael Garcia Bernal‘s oncologist character, who becomes Marley’s lover starting in Act Two, looks trapped but not entirely miserable. He mans up and does the job. Kathy Bates and Treat Williams play her anxious and conflicted parents with at least a semblance of dignity. And Whoopi Goldberg plays a mind’s-eye version of God…don’t ask.

Hudson‘s success is based on her roles and acting style reflecting the lives and attitudes of shallow, not terribly perceptive girls everywhere (the ones who used to read Cosmopolitan in the ’60s, ’70s and ’80s), and this is a shallow, not terribly perceptive film that tries to turn a story about a young woman’s premature death into a transformative turn-on — a movie that, as Hudson’s Marley character puts it, tries to “put the FUN back in funeral.”

As I watched it hit me that Hudson, now 33, has moved past that pristine youth-glow look and is now squarely in her 30s. Her face is a bit heavier. She’s no longer Penny Lane, looking a wee bit older than her years.

Before seeing Christopher Kenneally and Keanu Reeves‘ Side By Side, a clean, disciplined and highly intelligent doc about the industry’s ongoing transition from film to digital, I had never seen live sound footage of Lana (formerly Larry) Wachowski. No biggie. Just saying. All in, Kenneally has given her about two minutes of screen time.

I searched and searched for information about exactly when Socialist Francois Hollande will officially take over as President of France, having defeated Nicolas Sarkozy in yesterday’s election. Story after story refused to provide the takeover date, but I finally found it in an AP report that states the following: “Hollande has virtually no foreign policy experience but he will face his first tests right after his inauguration, which must happen no later than May 16th.”

An apparently legit photo of an advance-purchase IMAX ticket at an AMC theatre in Concord, North Carolina indicates that Ridley Scott‘s Prometheus has been rated R. Pic was reportedly posted by an IMDB user named “dvonnesoneek” and initially pointed out by comicbook movie.com’s “nailbiter 111.” Ladies, it’s okay with me. 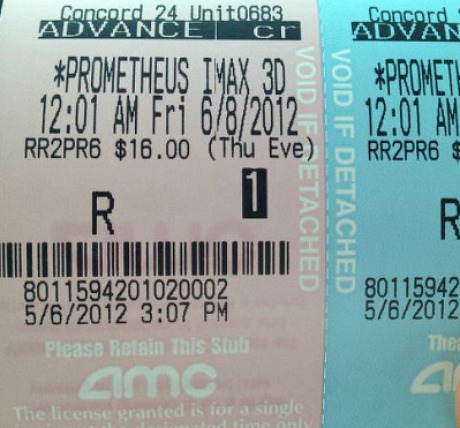 Update: Collider‘s Steve Weintraub reported around 9 pm Monday night that 20th Century Fox “has confirmed Prometheus will be rated R for ‘sci-fi violence including some intense images, and brief language.'”

In my latest piece about 1.85 aspect-ratio fascism (“Will Dial M For Murder Be Mauled By Fascists?”, 4.28), aspect ratio know-it-all Bob Furmanek contended that Elia Kazan‘s On The Waterfront was initially projected and was intended to be seen in a 1.85 to 1 aspect ratio — a truly sickening notion given the compositional balance and perfect framing contained in the 1.37 to 1 version of this 1954 classic. 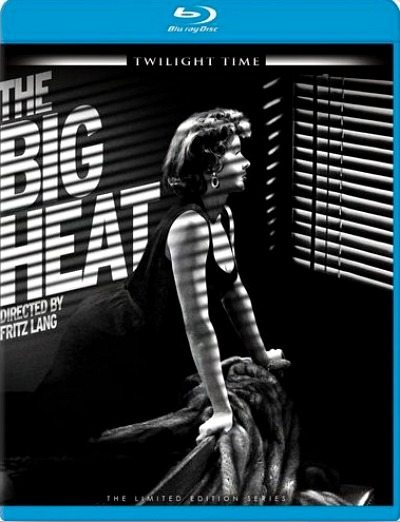 Waterfront in 1.37 is all anyone has ever seen on the tube, VHS, laser disc and DVD. But if guys like Furmanek have their way…

I’m not disputing Furmanek’s Waterfront reporting, however repellent his aspect-ratio aesthetics may be. But how does he explain a new Bluray of Fritz Lang‘s The Big Heat, a Columbia release, being presented on the Twilight Time Bluray at 1.34 to 1, given that Lang’s film opened in October 1953 — a full six months after Columbia laid down the 1.85 law? According to a Bluray.com review, the Big Heat Bluray was “culled from HD masters provided to Twilight Time by Sony-Columbia” — in other words by Grover Crisp.

Lang was an esteemed, old-time director who’d begun in Germany in the 1920s, so you can bet he composed The Big Heat and intended to have it seen at 1.33. But if everything had to be 1.85, why didn’t Columbia just give orders to projectionists to show The Big Heat within a 1.85 to 1 aspect ratio and to hell with Lang’s 1.33 compositions?

I don’t know for a fact that The Big Heat began shooting in April 1953 — it might have begun a bit earlier, or in late 1952 even. But an edict is an edict. Did Cohn have a soft spot for Lang? Was Cohn a tough guy or wasn’t he? Cohn ran Columbia with a bullwhip and typical big-studio shooting schedules were tight, and a five- or six-month turnaround (the beginning of principal photography to theatrical release) would have fit within the norm.

Somehow or some way a person in control of the shape of The Big Heat wimped out — Cohn, Crisp, somebody in the food chain.

If Crisp’s intention is to make good on Cohn’s meat-cleaver aesthetic then Blurays of all April 1953-and-beyond non-Scope films have to be 1.78 or 1.85, and fascists like Furmanek should support Crisp in this effort. In fact, if Crisp and Fuhrmann were truly committed to chopping off the tops and bottoms of 1.33 films they would cleaver Sony Home Video’s endlessly delayed From Here To Eternity Bluray to 1.85. Why Not? Don’t fudge it, guys. You have to be hard.

Four or five days ago a critic friend told me that Dark Shadows is a no-go. So I asked another guy who’s seen it and generally liked it, and he said this: “It’s getting a polarizing response as there are many positives about it. If you’re looking for career growth, forget it. But it’s entertaining — better than Burton’s last couple of work-for-hire gigs.”

The Avengers has hit $200.3 million for the biggest three-day U.S. weekend of all time. Add the int’l cume of $441.4 million and you’re talking…hold on…$641.8 million for the domestic three-day plus the 12 days since it opened on the 26th or thereabouts.

Cheers to Kate Beckinsale (best thing she’s done since Nothing But The Truth), Judy Greer (finest achievement since her phenomenal Descendants performance) and Andrea Savage.

Republicans, Get In My Vagina! from Kate Beckinsale
May 6, 2012 8:32 amby Jeffrey Wells
7 Comments
News To Me

I saw Sydney Pollack‘s Jeremiah Johnson once in late ’72, and that was it. Despite an excellent memory for particulars, I have no recollection of this 116-minute film having a roadshow aura with an overture, entre’acte and whatnot. But DVD Beaver’s review of the just-out Bluray says it did. An intermission for a film lasting 116 minutes would have been unusual, if not bizarre. The Wiki page says there was a shorter version lasting 108 minutes.

4 Comments
You Try It

A sense of increasing warmth and a gradually approaching summer was unmistakable in Los Angeles and New York in recent days. And then I came to Berlin. Grayish, grumpy weather tends to make people (i.e., me) feel the same. On top of which I wasn’t able to see last night’s super moon because of the heavy cloud blanket. 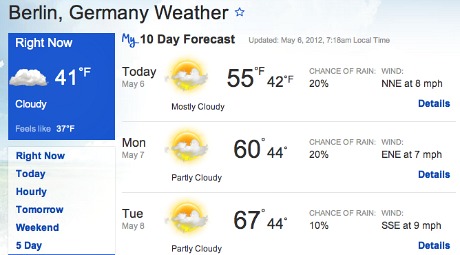