My Berlin-to-Nice plane (by way of Dusseldorf) leaves in a half-hour or so. I’m due to arrive at 1:45 pm. Then comes the sluggish ground transportation to Cannes. And then the press badge pickup and dropping off the bags and whatnot. And then the 7:30 pm gathering at La Pizza. So not much filing until later tonight. Maybe some photos around dinner hour.

Let me get this straight: Alfonso Cuaron‘s allegedly groundbreaking Gravity, an IMAX-filmed 3D space drama that wrapped principal photography roughly eight months ago, won’t open later this year but sometime in 2013 because of competition for IMAX screens from Skyfall and The Hobbit and one or two others?

That sounds to me like 2001: A Space Odyssey being bumped out its April 1968 release slot because of competition for screens from Chitty-Chitty Bang-Bang or…you know, something of that calibre.

The vision of Alfonso Cuaron doesn’t make way for safe audience-pleasing franchise films from Sam Mendes or Peter Jackson…c’mon. Especially with George Clooney and Sandra Bullock toplining. Methinks there’s possibly a bit more to this than the availability of IMAX screens.

Variety’s Andrew Stewart is reporting that Alan Rickman has landed what sounds to be his first truly decent role in years…maybe…as downtown Manhattan showman Hilly Kristal in CBGB, which Randall Miller (Bottle Shock) will direct from a script by Miller and Jody Slavin.

Playing a guy like Kristal will allow Rickman to go all madman and ticky and impassioned and tough at the same time…if the script is any good. My concern is that I saw Bottle Shock two or three years ago at Sundance and I didn’t exactly levitate.

I was a half-hearted CGBG attender in the mid to late ’70s. (I wasn’t hip enough to even stick my head in the place before 1975.) I never saw the Ramones or Blondie there, but I caught a Television set once (Tom Verlaine, “See No Evil”), and the great Patti Smith one time. (I also saw her in Westport and in Paris in ’76.) I’ll never forget her singing “Time Is On My Side” — that was heaven. I also remember catching Wendy O. Williams and the Plasmatics

I never wanted to know that CBGB & OMFUG stood for. I just loved the raunchy, rude sound of it.

I have to get hold of the first two or three episodes of The Newsroom (HBO, debuting 6.24) as soon as possible because this looks so effing great I can’t stand it. The three trailers indicate this is the new Network. Creator-producer-writer Aaron Sorkin gets to say everything he thinks under the cover or guise of televised drama, and therefore: “We were not attacked by Muslims — we were attacked by sociopaths.”

The Blues Brothers was about John Belushi and Dan Aykroyd riffing on the white-guys-playing-the-Chicago-blues concept, which was originally personified with utter sincerity by the scowling, grittily-posed, Rayban-wearing Paul Butterfield Blues Band. The Blues Brothers were nervy and funny when I first saw them perform on Saturday Night Live in April 1978, and they doubled down on that when I saw them live at Carnegie Hall later that year (or was it ’79?). But the coolness went all to hell with the release of John Landis‘s The Blues Brothers (’80).

What was it about The Blues Brothers that obliterated and suffocated? Oh, I don’t know. Maybe the fact that it was an unfunny, over-emphatic, overproduced super-whale that was made on cocaine (or so the legend went)?

I asked Landis about this wildly inflated, pushing-too-hard aspect when I interviewed him in ’82 for an American Werewolf in London piece. It was over breakfast at an Upper East Side hotel (Landis was hungrily wolfing down a plate of scrambled eggs and home fries), and I said that the “enormity” of The Blues Brothers seemed “somewhat incongruous with the humble origins of the Chicago Blues.”

That hit a nerve. “It wasn’t supposed to be a documentary about the humble origins of the Chicago Blues!” Landis replied. But the essence of the Chicago blues wasn’t about flamboyant energy and huge lavish musical numbers and car chases or mad slapstick, I said. And you movie seemed to take that Paul Butterfield current and amplify it beyond all measure or reason. Okay, I didn’t literally say all this to Landis but that was the basic implication. (I wasn’t impolitic enough to cal it “a cocaine movie” but that’s what it damn sure felt like.) As Landis argued with me the Universal publicist sitting at the table started making “no, no” faces, indicating that I should tone it down.

On any case I mostly hated The Blues Brothers from the get-go, and here it is 32 years later and I still hate it. And now Press Play‘s Aaron Aradillas has written an essay about it called “Cruel Summer.”

In an undated but presumably recent article for some WGAW-related newsletter or whatever, director-screenwriter Nicholas Kazan recalls how Arthur Miller‘s Death of a Salesman was nearly picked to death by well-meaning collaborators before it opened on Broadway in 1947.

“If the most successful producer of that era wanted to change the title [of Miller’s play],” Kazan writes, “and if he and two of the leading directors of the time considered the play ‘unproducable’ and further agreed on what the problem was, and if all these ‘experts’ were wrong in every respect about a play regarded as a masterpiece, how does anyone ever dare to give notes?

“Why is it that, in Hollywood, every producer, studio executive, and development person just out of college feels entitled to make suggestions on every script they receive? How can they be so confident of their opinions? Are they truly unaware of the damage they can do?

“Why is every draft from every writer considered just a ‘work in progress,’ a rough approximation waiting to be improved by the wise counsel of a dozen or more readers?

“Why do we writers accept notes that will destroy what we have so painstakingly created?

“And if we refuse to make destructive changes, why are we considered ‘difficult’ rather than ‘principled and passionate’? Why are we not considered experts, both in general and, most especially, on the distinct universe of the script we have written?

“I told the preceding story to, and asked these questions of, a friend who runs a major studio. She said, ‘So what does this mean? Are we supposed to give no notes at all?!’

“I said, ‘No. Give notes, but as suggestions, not mandates. Feed the writer. If the writer is inspired by your idea, great; if not, drop the subject because the note is probably wrong. The writer may not be able to tell you why it’s wrong, but trust him or her, it is.'”

“I’m Barack Obama, and I approved this message”…gangsta!

I hung out yesterday with a little German mutt who was somewhat behind the eight ball. She came in barking, howling, scared, aggressive. All little dogs do this. So I tried to disarm things by sitting still, but she got upset whenever I got up or moved or eyeballed her. So I said “eff it” and pretended to be another dog — panting, mock-barking, making dog noises. Then I chased her around the room in a playful way. We gradually got down to the petting and stroking and “I’m okay, you’re okay” part. All was cool. 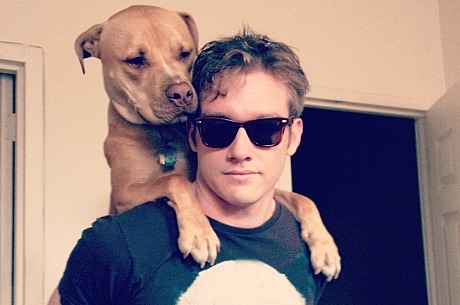 Joey is not the dumb dog of the title — he’s trusting, intelligent, very cool.

Then she went out for a walk and came back and was hyper and aggressive and yapping all over again. I could have been an alien from District 9. She didn’t remember a thing from before. All that bonding for nothing. Short-term memory loss. Then we went for a drive and she sat on my lap and I lightly massaged her neck and we were cool once again. But she had bad breath and farted and shed light-brown hair all over my black jeans and blue sweater. And then she got scared when I opened the window and moved her on my lap a bit and she bit me. I’ve gotten along with almost every dog I’ve ever met (including Joey, pictured above doing a Yoda-and-Luke thing with Jett) but not this one.

Another indication of dog stupidity is when they bark at planes flying overhead at 20,000 feet.

I’ve learned that it’s best to pack multiples of needed items on the theory that one or even two will be misplaced or lost or God forbid damaged before the journey ends. So I’ve got two Mac Powerbooks w/ cords and connectors for each, two digital cameras, four power adapters, four combs, four reading glasses, four sunglasses, four 3D glasses for glare reducation, etc. It’s not a theory, actually. Somehow and some way, losses (or to be more precise mystifying vanishings) always happen on trips. No preventing this and certainly no understanding why.