I made a point of reading Don Winslow‘s “Savages” before catching Oliver Stone‘s film version last night, and I was fairly taken with it. I love Winslow’s tight sentences and smack-dab phrasings, and the way it reads like a screenplay. So despite the beating Savages has taken on Rotten Tomatoes and Metacritic, I was hoping for at least a modicum of satisfaction. Some of the book had to rub off. 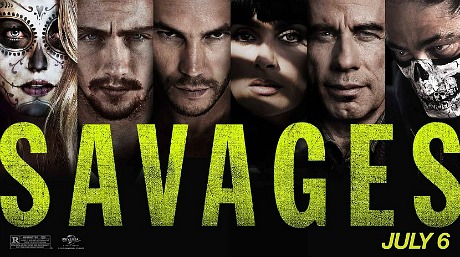 To me, that didn’t happen. At all. I felt assaulted and trapped and underwhelmed all through Savages. Almost nothing but pique. The first thing I said to a friend as I left the theatre was “why did they even make this thing? Who could possibly like this or recommend it with any enthusiasm?”

I was “directing the movie” as I read Winslow’s book, of course, and in my version the action was fast and brutal, like in real life, but I didn’t wallow in it. And the actors didn’t “act” — they read their lines flat, fast and straight. They just about threw them away, which is what you more or less have to do when you’re dealing with “I think we’ve struck gold” and “I had orgasms — he had wargasms.”

Stone does the opposite, for the most part. He whips up the visual energy every which way, glossing and flashing it up like there’s no tomorrow. And flaunting the spilt blood, gougings, torturings. All you want is for the killing and the sadism to ease up a bit, for Stone to go the “less is more” route. A touch of suggestion, imagination…not a chance. And the three leads — Taylor Kitsch, Aaron Johnson, Blake Lively — drop their on-the-nose lines like spoonfuls of mashed potatoes on the kitchen floor, “acting” with their eyes and smiling too much and pretty much murdering the potential coolness at every turn. It’s too “on the nose duhh” in all kinds of pushy, flagrant ways.

Narration is almost always a bad idea, but especially so with an action film. Lively is the
narrator here, and her opening line — “Just because I’m telling this story doesn’t mean I’m alive at the end of it…it’s that kind of story” — is terrible. I bought Joe Gillis narrating his own Sunset Boulevard saga from the morgue, but Lively saying she may or may not be dead at the end made me want to spit on the carpet. Stop prepping me!

Thank God for those occasional “well, at least that worked!” moments from Benicio del Toro and John Travolta. Because I had a really rough time with Savages, and particularly with that awful ending, which smells of the worst kind of “holy shit, let’s throw it in reverse and spin it around so it doesn’t feel so dark” post-test-screening desperation. It’s one of the worst endings I’ve ever seen in my life — a shattering, major-league embarassment for poor Oliver, whom I’ve admired much of my moviegoing life, and a failing grade for Winslow right out of the gate.

Savages is about a couple of youngish, very flush Laguna Beach pot dealers (Kitsch’s “Chon”, Johnson’s “Ben”) somehow failing to grasp the obvious when a Baja crime cartel tells them they want to distribute their potent product and split revenues 80-20. Which basically means “game over” and “time to move to Indonesia” because the Mexicans are fiends who will chew them up and spit them out one way or the other. Travolta’s character, a corrupt DEA guy, explains that the cartel, run by Salma Hayek‘s “Elena” and enforced by Del Toro’s “Lado”, is basically Walmart and that “they want a Ben and Chon section on aisle three.”

The guys intend to make a run for it while pretending to play along, but Elena smells duplicity and orders their girlfriend Ophelia, a.k.a. “O” (Lively), kidnapped. And once that happens it’s war — theft, hijackings, frame-ups, burnings, counter-kidnappings, etc.

You know who should have narrated Savages? Benicio’s enforcer. That I would have accepted. It would’ve worked. I can hear the lines right now.

This “you’re going to be bought out” scenario is the same one presented to Warren Beatty‘s John McCabe in McCabe and Mrs. Miller (’71). The owner of a burgeoning brothel in the small mining town of Presbyterian Church, McCabe is approached by reps of the Harrison Shaughnessy mining company and basically told “if you don’t sell out you’re dead.” McCabe doesn’t take this seriously, and before you know it three hired guns have come to town to kill him. Robert Altman‘s film ends with McCabe being hunted down in a snowstorm as the townfolk try to put out a fire in a church. McCabe and Mrs. Miller doesn’t end happily or triumphantly, but it’s a helluva lot better than the finale in Savages.

Jonathan Dayton and Valerie Faris made Little Miss Sunshine, one of the two or three best fllms of 2006, based on an Oscar-winning screenplay by Michael Arndt. And now they’ve got Ruby Sparks, based on a script by Zoe Kazan, that Fox Searchlight is opening on 7.25. And nobody’s talking about it…yet. Shouldn’t we be? Dayton and Faris are good. Maybe things’ll shift into a higher gear next week or something.

IMDB logline: “A novelist struggling with writer’s block (Paul Dano) finds romance in a most unusual way: by creating a female character (Kazan) he thinks will love him, then willing her into existence.”

An IMDB guy has claimed or or inferred that Ruby Sparks is about a Manic Pixie Dream Girl (MPDG).

“The MPDG Wiki page notes that “film critic Nathan Rabin, who coined the term after seeing Kirsten Dunst in Elizabethtown (2005), describes the MPDG as ‘that bubbly, shallow cinematic creature that exists solely in the fevered imaginations of sensitive writer-directors to teach broodingly soulful young men to embrace life and its infinite mysteries and adventures.’

“MPDGs are usually static characters who have eccentric personality quirks and are unabashedly girlish. They invariably serve as the romantic interest for an often brooding or depressed male protagonist. A prime example is Natalie Portman‘s character in the movie Garden State, written and directed by Zach Braff. Kate Hudson‘s character, Penny Lane, in Almost Famous, has been called a MPDG.

“Rabin points to Katharine Hepburn‘s character in Bringing Up Baby (1938) as one of the earliest examples of the archetype; later examples include Audrey Hepburn in Breakfast at Tiffany’s, Goldie Hawn’s characters in Cactus Flower and Butterflies Are Free, and Barbra Streisand‘s in What’s Up, Doc (1972). ] Zooey Deschanel’s roles in (500) Days of Summer, Yes Man, and the TV show New Girl have also typified the MPDG.

“The Filmspotting podcast created a list of ‘Top Five Manic Pixie Dream Girls.’ Nathan Rabin appeared as a guest and created his own, separate list of MPDGs. Among those included were Catherine (Jeanne Moreau) in Jules and Jim, Jean (Barbara Stanwyck) in The Lady Eve, Sugar (Marilyn Monroe) in Some Like It Hot, Gerry Jeffers (Claudette Colbert) in The Palm Beach Story, and Ruth Gordon‘s Maude in Hal Ashby‘s Harold and Maude.”

The Dark Knight Rises is screening tonight and tomorrow night in LA for the junketeers attending Sunday’s press conference. It’s also screening twice in Manhattan on Tuesday, 7.10 — an afternoon IMAX showing and a regular-regular one. I’m told it won’t screen for LA journos who aren’t regular junket-freeloaders until after Comic-Con (Thursday, 7.12 through Sunday, 7.15), which means either Monday the 16th or Tuesday the 17th. WB is saying no print reviews may appear earlier than Wednesday, 7.18 and no online reviews in any form earlier than Tuesday, 7.17. Chris Nolan‘s thundering, groaning, pile-driving, power-pop finale opens on 7.20.

A dp friend recently bought the Canon EOS C300 — a “cinema-rich HD motion picture system” that came out eight months ago — for somewhere between $16 and $20K. It compares well with the Red Scarlet X, which came out at the same time. (And is actually cheaper.) B&H Video ran a review a week or two ago.