As far as ComicCon giveaways go, this Django Unchained T-shirt is fairly appealing. The problem, as always, is that giveaway T-shirt material is always coarse, always Hanes-y. And the sleeves are too wide and long. If this shirt was made out of fine, densely-threaded material I’d wear it. Well, once or twice. 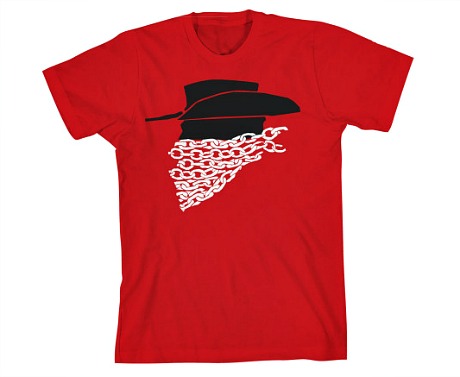 From Press Play‘s Matt Zoller Seitz, the first installment of Beaver’s Lodge, a weekly series of video essays narrated by actor Jim Beaver which will offer critical takes on some of Beaver’s favorite films. Best known as “Ellsworth” on HBO’s Emmy-award winning series Deadwood and as “Bobby Singer” on Supernatural, Beaver is an actor, playwright and film historian. Note: Press Play‘s embed code is ridiculous so I chucked it. Here’s the page link.

I’ve been wondering how another urban drama about L.A. cops cruising around in a black-and-white could be anything special, but a journo pal who’s seen David Ayer‘s End of Watch (Open Road, 9.28) says it is. Found-footage genre, seemingly shot with iPhone. Jake Gyllenhaal, Michael Pena, Anna Kendrick, Cody Horn (the older sister in Magic Mike) and America Ferrera. “Definitely” going to Toronto. Telluride? Probably not.

“Even if you have a long-run deficit problem — and who doesn’t? — slashing spending while the economy is deeply depressed is a self-defeating strategy, because it just deepens the depression.” — from Paul Krugman‘s 3.31.12 N.Y. Times column, titled “The Austerity Agenda.”

I’ve spoken to three persons who attended one of the two screenings yesterday of The Dark Knight Rises in Manhattan. Without being specific or spoilery it seems fair to generally summarize at least some of what they said. So here are the main observations, starting with the most positive and working our way down:

(a) “It’s going to be huge…dramatically and thematically a very powerful film,” says one. “It’s a special kind of blockbuster,” a somewhat younger media guy says. “The Avengers is a joke next to this…I know a good movie when I see one.” Another claims that “it’s better than both of the Joel Schumacher [Batman] films and the two Tim Burton versions put together.”

(b) One responder feels that “the best thing about it are the performances by Anne Hathaway and Joseph Gordon Levitt.”

(c) The geekboy known as “c*mfckn*w” who tweeted after last Friday night’s junket screening that “if this does not break the mold and win Best Picture, no comic-book movie ever will”…this guy is delusional, I’m told. TDKR will be a box-office behemoth, but like TDK and BB before, it’s just not Best Picture material. Certainly not as the average Academy member defines that term.

(d) It’s strong but quite long, and in one person’s view “not that compelling…there’s a really solid 115 or 120 minute drama with action in there [but Nolan] has made this huge bloated thing that runs two hours and 40 minutes.”

(e) Tom Hardy‘s Bane is an unmistakably strong figure in and of himself, but he’s no match for Heath Ledger‘s Joker. He just doesn’t deliver the same bark and spark that Ledger gave to The Dark Knight.

The rest of the reactions are too spoilery to mention.

30 Comments
Respect Should Be Paid

The Dark Knight Rises was screened yesterday and last weekend to elite press, and will have its big world premiere screening next Monday while showing earlier that day for second-tier press, followed by an IMAX screening on Tuesday, 7.17. So it’s looksee time all around, and yet Warner Bros. publicity has decided not to show TDKR at Comic-Con 2012, which kicks off tonight in San Diego. I’m told they might be offering some kind of private-screening option to a select few, but there’ll be no big screening in Hall H or anywhere else in San Diego. 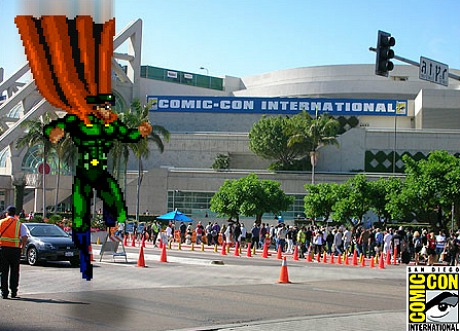 I’m the last guy in the world who could relate to average Comic-Coners, but this strikes me as, no offense, a somewhat unfriendly and inconsiderate thing on WB’s part. TDKR is almost certainly going to ring the bell for hardcore Comic-Coners like no other film this year, and it’s being shown left and right in NY and LA and yet WB publicity is blowing them off? The biggest, best-known convention in the world for geekboy fans of comic-book movies and fantasy CG fare? Really?

I realize that TDKR doesn’t “need” to be shown at Comic-Con, as a journalist friend pointed out an hour or two ago, and that director Christopher Nolan feels that he’s operating on a somewhat higher plane than other genre filmmakers, and that he regards TDKR as being a bit more artful and/or metaphorical, or generating greater voltage levels, than the sort of film that is usually hawked at Comic-Con. He’s not a “genre” filmmaker — he’s Chris Nolan, and he wears dark-blue suits and speaks with a British accent. He probably sees himself as a kind of Stanley Kubrick-like figure, and if he does he’s not wrong.

If I was running the WB p.r. campaign I would sit him down and say, “Chris? Like it or not but the ComicCon-ers are this movie’s base, and at the very least it would be good manners to show it to them during Comic-Con 2012. I know we haven’t screened our big Batman movies to them before, but this is the last one and we should this time. They really care, they really believe and while we understand your game and how you see yourself and the film, we still need to pay tribute and respect for the ComicConers. It’s the right gesture, all things considered.” 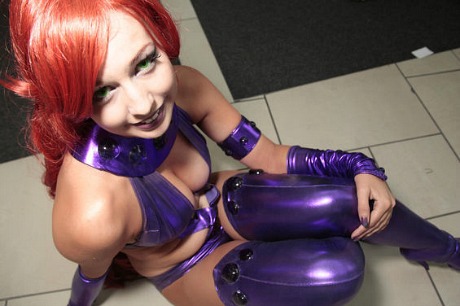 “Speculation that Katie Holmes was motivated by concerns about her daughter, Suri, being educated by Scientologists and initiated into a secretive group called Sea Org were given credence by the couple’s joint statement, in which they sought to ‘express our respect for each other’s commitment to each of our respective beliefs.'” — — from a 7.11 London Evening Standard piece by Joshi Herrmann.

If true, this strikes me as absolutely vile behavior on Cruise’s part. To expose his daughter to what amounts to a kind of Scientology-flavored Hitler Youth camp, the idea obviously being to indoctrinate children while their minds are soft clay, seems, if true, utterly despicable.

“An insider told celeb news site Radar [that] “Suri isn’t permitted to be exposed to anything Scientology-related, and this includes going to any Scientology churches, parties, etc. Katie made sure this was ironclad.” — also from Herrmann’s piece.