Smell that breeze? Can you feel it on your face? It’s coming from the Pacific, and it might have something to do (although it would be pure speculation on my part) with the ending of Comic-Con in San Diego. Let it go, right? Render unto Caesar (or some substitute entity of your choice) the things which are Caesar’s, and unto God the things that are God’s. At the very least Comic-Con is a highly enjoyable gathering of the geeks, if you’re part of that crowd…bon ami, hail fellow, hoist the brewskis. I get that, fine. No biggie and no worries, but it’s kinda nice that it’s over.

So the only real excitement came from the presentation of Neil Blomkamp‘s Elysium…do I have that right? Or was it the opportunity to get Henry Cavill‘s autograph?

“The last time that I saw Celeste Holm was at a party at Lincoln Center following the world premiere of Steven Spielberg‘s War Horse. My date was my mom, who had met Celeste when she came to my college film festival years before, and who joined me in marveling that, even at the age of 94 and wheelchair-bound, she was still getting out and about. What a lust for life! 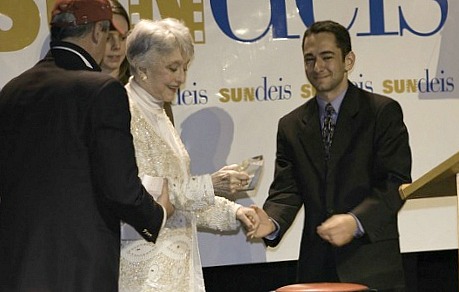 “That night, while most of the guests rushed past the quiet old woman in the wheelchair in order to get a word or a picture with the stars of the moment, I pulled aside a few friends and introduced them to someone who would be remembered long after the vast majority of the others had been forgotten. It was a privilege to know her.” — from Scott Feinberg‘s remembrance of Ms. Holm, posted earler today following her death.

For whatever reason I didn’t pay much attention to this trailer for Roger Michell‘s Hyde Park on Hudson (Focus, 12.7) when it posted six or seven weeks ago. I don’t know what the film will finally feel like, but the trailer suggests a jaunty, slightly comedic attitude. It feels broad. And I’m not quite sure about Bill Murray‘s grasp of Franklin D. Roosevelt‘s voice — it feels off. I don’t know. I want to like it. I hope the film is better than it seems. 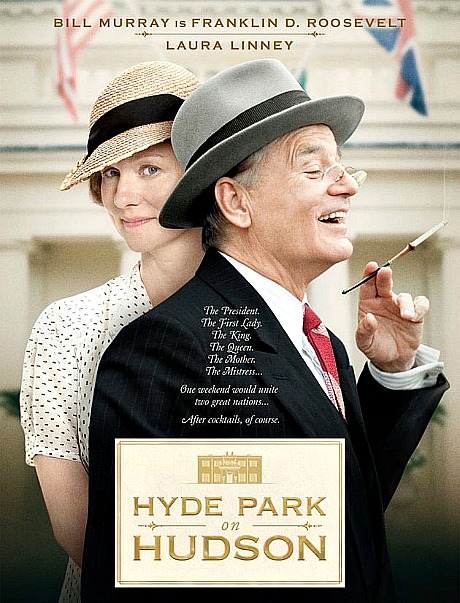 I know, I know — Laura Linney for Best Actress! But I’m also looking forward to Olivia Williams‘ performance as Eleanor.

Tomorrow night I’ll be at Sony Studios for a presentation of 22 “gigantic” backdrops, sponsored by the Art Director’s Guild and created by JC Backings and used for classic films as North by Northwest, Singin’ in the Rain and The Sound of Music. The backdrops (some 60 feet wide and 24 feet high) will presumably occupy at least a few of sound stages. The press release says they’ll “represent a wide cross section of genres and techniques used by artisans for more than 75 years,” meaning they’re duplicates of the originals, I gather. 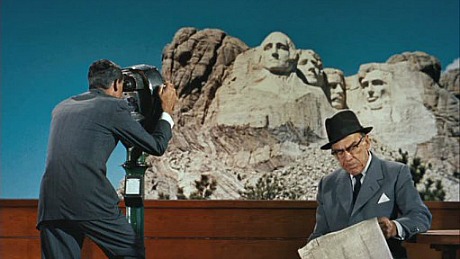 The evening will celebrate the ADG’s 75th anniversary. Members of IATSE Local 800 will attend. There will be a special appearance by scenic painter Karen L. Maness, co-writer of ADG’s next large-format publication, “The Art of the Hollywood Backdrop.” 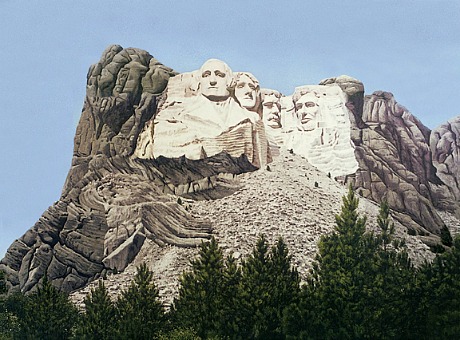 The swoony ComicCon fanboys didn’t say boo about Peter Jackson‘s 48 frame per second turn-tail during yesterday’s Hobbit panel in Hall H, but TheWrap‘s Sharon Waxman brought it up, at least. 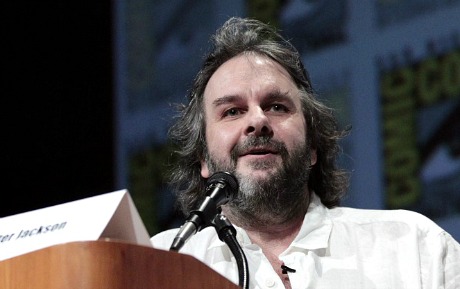 11 or 12 minutes’ worth of The Hobbit: An Unexpected Journey had just been screened, but in the standard 24 fps format. Waxman writes that Jackson “didn’t even mention 3D or show the higher-resolution 48 frames-per-second footage that was shown to theatrical exhibitors in April.”

“Like anything, you’ve got to get used to it,” Jacxkson told the crowd yesterday. “You don’t know whether you like it or not until you can be immersed in it for two hours. That’s how it should be judged — not in a convention hall, in an environment that is not the cinema.”

For what it’s worth I’ve heard that Warner Bros. tech guys ran a test projection of Jackson’s 48 fps Hobbit footage inside Hall H, and that they weren’t satisfied with it. If this really happened and this alleged dissatisfaction was a key factor in the decision not to show the 48 fps reel, I don’t know why Warner Bros. didn’t just say that. This I would’ve understood.

“Forty-eight frames is terrific,” Jackson told the crowd. “I think it’s going to change the way things are made. It’s a terrific advancement, giving people an immersive experience that they can’t get off their iPads and to get people back to the cinemas. We are living in an age where teenagers are not going to the movies.”

But “I didn’t want people to sit there and watch 10 minutes of film and all they write about is 48 frames.”

Jackson elaborated in a 7.15 interview the The Huffington Post‘s Mike Ryan, who began by asking if Jackson was “disappointed by the internet reaction” to the 48 fps footage shown during Cinemacon in Las Vegas.

“Yeah…I mean, disappointed, I guess, is one way [of putting it]. I wasn’t surprised in the sense that my experience with 48 frames ?? and I’ve seen hours and hours and hours of it, obviously ?? is that it’s something that becomes a real joy to watch, but it takes you a while.

“It’s like watching a movie where the flicker and the strobing and the motion blur what we’ve been used to seeing all of our lives — I mean, all our lives in the cinema — suddenly that just disappears. It goes. And you’ve got this incredibly vivid, realistic-looking image. And you’ve got sharpness because there’s no motion blur, so everything is much sharper. And plus we’re shooting with cameras that are 5K cameras, so they’re super sharp.

“Now, what I learned from the CinemaCon experience is don’t run a seven or eight or ten minute reel where the total focus is going to be on the 48 frames. I mean, that was a disappointing thing at CinemaCon. Forty-eight frames I’m not worried about, because when this movie comes out and people see it at 48 frames, they’re actually going to get the experience that I’ve had for the last 18 months. I’m a film guy, I’ve grown up all my life going to the movies, and I think 48 frames is great. So I’ve got to believe I’m not stupid. I have to believe it.

When Ryan says he’d been hoping to see the 48 fps version at Comic-Con, Jackson says, “I
know, but Hall H, a big convention center…that’s not the way to judge it. It’s an important thing to judge, because the industry may or may not want to adopt high frame rates, and I think it has to be taken very seriously. And I think the only logical thing to do is to let people see a feature-length narrative film at 48 frames. I’ve no doubt whatsoever that people are going to enjoy it.

“But the disappointing thing with CinemaCon is that no one talked about the [content of the] footage. The first time we ever screened The Hobbit, all the stories were the 48 frames stories. And then the negative guys, the guys that say this doesn’t look like film — the guys who are in love with the technology of 1927 — are sort of sitting there saying, ‘But it doesn’t look like cinema. This is not what we’re used to seeing in the films.” And those stories rush around the world and no one talked about the footage.

“So I’m not going to go to Comic-Con with 12 minutes of footage and have the same reaction. I don’t want people to write about 48 frames. Forty-eight frames can be written about in December. When people can actually watch a full-length narrative film, everyone can go to town on 48 frames, because that’s the form that you’ve got to see it in. And if you hate it, you hate it. And if you like it, you like it. [But] I think most people will [like it].”

Early this morning HE reader “gazer” wrote that yesterday’s riff about (a) alleged buyer reactions to Terrence Malick‘s To The Wonder and (b) my judgments about Sarah Green and Nick Gonda‘s apparent tendencies as Malick’s producers (“Malick’s Enablers Doing Him No Favors“) boil down to my “essentially trying to lobotomize a filmmaker who rubs [me] the wrong way.” I wrote a response an hour ago:

Wells to gazer: Malick doesn’t rub me that aversely. He’s always been a very special, obviously gifted filmmaker-poet-dreamer-painter. Most people understand that. His personality and spiritual worldview are part of the threadwork of everything he’s done, and he’s influenced others here and there. Badlands and Days of Heaven are mesmerizing works. But more to the point, they’re disciplined…unlike, in my view, the films he’s made since he returned 14 years ago from his J.D. Salinger-like withdrawal with The Thin Red Line.

I read Malick’s fascinating draft of The Thin Red Line script in ’96. It was quite different than the 1998 film that he shot and cut together — compressed, tightly threaded, far less meditative. The New World gets better and better every time I see it — I watched the longest director’s cut on Bluray a year or so ago and was really taken away by the primeval Jamestown portion, although I still felt and do feel unsatisfied and even irked when Colin Farrell abruptly disappears and Christian Bale shows up and Pocahantas travels to England and suddenly dies. And I thought that the first hour or so of The Tree of Life was sad and moving and detestable and quietly mind-blowing, but that the center didn’t hold and it kind of spaced itself out and lost the thread, whatever that thread may have been. (I’m forgetting now.)

My point is that Malick’s method of shooting and particularly editing strikes me as random and swirly and catch-as-catch-can, and in a strange way almost forced. He shoots what he shoots and then he tosses the lettuce leaves into the air and grabs a leaf here and there and eliminates Sean Penn‘s Tree of Life character or Adrien Brody‘s Thin Red Line character (“Fife”) when the mood strikes, and then he picks some strands of pollen fibre out of the air and weaves them through the lettuce leaves and throws it all together into some kind of swoony patchwork ball of yarn or free-association mescaline trip — an impressionist fever dream by a guy who’s looking to rewrite the manual.

Which is very brave and exciting on his part, and at the same time bothersome, depending on my mood when I’m watching one of his more recent films. I basically feel/believe that the Malick of the ’70s was a much more interesting and transporting director than the one who re-emerged with The Thin Red Line — that’s all. I’m not dismissing him out of hand or saying that he rubs me the wrong way….although he actually kind of does at times. But he also amazes and delights me from time to time.