Following the Cinerama Dome’s midnight show of The Dark Knight Rises (which is playing as we speak), there’s a 3:45 am show that’ll get out around 5:30 am. Then to an early breakfast and off to work — love it. I could definitely catch an IMAX screening at 3:45 am, but a lousy Cinerama Dome showing? Nope.

The Academy’s ongoing “Last 70mm Film Festival” includes a lobby exhibition of unique photos and items related to 70mm films, all from the collection of the Margaret Herrick Library. I was especially fond of three pics taken during the filming of Spartacus. 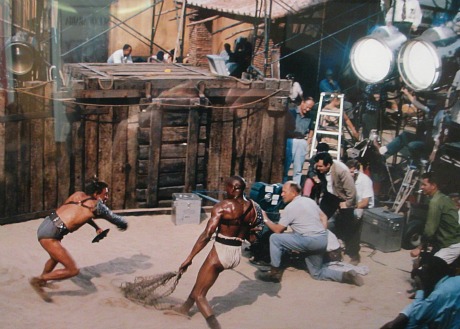 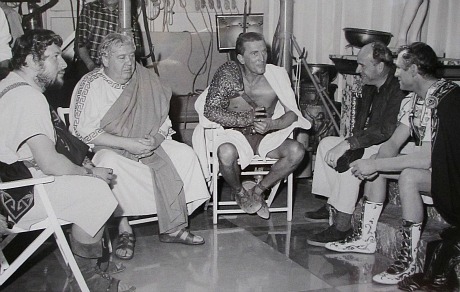 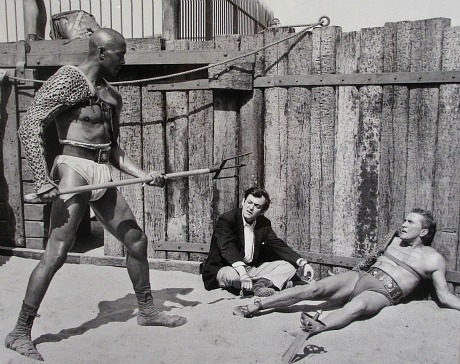 When Ann Romney told Good Morning America‘s Robin Roberts this morning that “we’ve given all you people need to know” about her husband Mitt Romney‘s tax history, she conveyed a haughty, higher-on-the-totem-pole, better-than-thou attitude. “You people” down in the pit, she meant — the “other,” the deluded, the unquiet…rabble-rousing, agitating, mean-spirited, gay, intellectual, dark-skinned, un-Mormon. Am I wrong?

I attended a screening of a digital 4K version of Lawrence of Arabia in Cannes last May. The same version, painstakingly assembled by Sony’s Grover Crisp based on 24 year-old elements created by Robert Harris and Jim Painten, is showing this evening at the Academy in Beverly Hills. Freddie Young‘s 70mm cinematography looks as beautiful as ever, and perhaps even a bit more than it did when Lawrence first opened in late 1962. Or so it seems. The digital Lawrence looks very nicely burnished.

But — and I hate to say this — what I saw in Cannes didn’t look as sharp and precise as I wanted it to look. The lenses and cameras used by Young in 1961 and ’62 just didn’t and couldn’t deliver the clarity and detail that you can see in films shot with the digital Red camera. That’s because this technology delivers what looks to me like a much sharper and richer picture — better lenses, more sensitivity, a film-like image but with much more complexity.

The honest truth is that a part of me wants to see an angel from heaven come down to earth and offer to carry three or four Red cameras back in time to 1960 or ’61 and and give them to Young and David Lean and say “please use these, gentlemen…you won’t be sorry…your film will look much, much more handsome and transporting if you do.” I’ve become used to Red-like clarity in theatres, and I really like it. And if I had my druthers I’d want Lawrence of Arabia to look a tiny bit sharper and crisper than it does now. It looked very nice when I saw it in Cannes, mind — I fully understand what 50-year-old films look like and had no complaint with what I saw at the Salle du Soixantieme on May 19th— but the dreamer in me still wanted more.

I realize that the Bluray of Lawrence of Arabia will look great, and that I’ll be very pleased when I play it on my 50″ Vizio. And no, I’m not hoping to see a “shiny” Lawrence Bluray a la Universal Home Video’s “shiny” Spartacus. I’m just saying that 50-year-old Panavision cameras and lenses could only do so much, and that a part of me wishes they could have done more.

Jonathan Dayton and Valerie Faris‘s Ruby Sparks (Fox Searchlight, 7.25) is, at heart, a film about the impulse to try and change or control a girlfriend or boyfriend. The third-act lesson is that we all need to be better people, but a girlfriend or boyfriend has to either accept who and what their partner is…or not. But nobody is soft clay, and we need to respect each other’s integrity (unless, of course, he or she happens to be deranged or a druggie).

The screenplay, written by Zoe Kazan, is about a blocked novelist (Paul Dano) dreaming up an imaginary girlfriend (Kazan) named Ruby Sparks. After getting over the shock of her manifestation and then falling in love with her, Dano gradually realizes that if there’s anything about Ruby he doesn’t especially care for, all he has to do is go to his manual typewriter and type that she no longer has this trait or tendency, and/or that she has a new trait or tendency…simple. This leads to trouble, trauma and loss, of course. Even imaginary girlfriends have to be allowed to find their own way.

The interesting wrinkle is that Ruby/Zoe isn’t just a figment of Paul’s imagination. She’s absolutely, biologically real, and can be seen and heard and felt and smelled by anyone and everyone else — i.e., Paul’s brother (Chris Messina) and mother (Annette Bening) and the mother’s boyfriend (Antonio Banderas), etc. How has this happened? Kazan’s screenplay offers no answers or clues, which is a way of saying to the audience “forget the particulars and concentrate on what the story is about.”

But a really good screenplay always addresses the mundane and the profound stuff simultaneously. A really good screenwriter always deals with the people in the audience who insist on some kind of plausibility, and tries to make the movie work for them on some level. Why, then, did I totally buy everything that I saw in Being John Malkovich? Hard to answer that. Bit I know it’s bothersome that Ruby’s rules of existence are never explored or even questioned.

And that goes double for the ending when…forget it, spoiler, too soon, later.

As far as I can tell this shot of Joan Blondell, taken sometime in the early ’30s, is colorized. It seems that almost no color shots of movie stars were taken around this time, and certainly none in the ’20s. Perusing top-quality color snaps of the big stars of this era would be fascinating. But there are none of these apparently, and so these people seem to exist only in a silvery black-and-white cocoon. If anybody knows something I don’t, please advise. 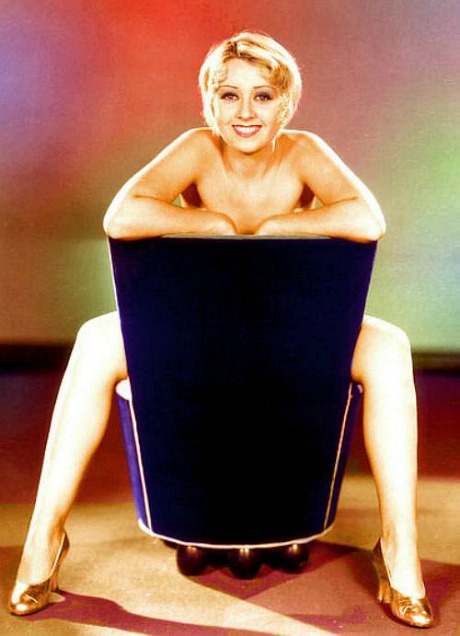 This morning Summit Entertainment announced a decision to wait until 12.21 to launch Juan Antonio Bayona‘s The Impossible, an upscale, adult-minded tsunami disaster film, in a limited (NY and LA) way prior to a wide break in early 2013. It had been assumed/presumed that Summit would open it concurrent with the 10.11 debut in Spain, but no — they’re waiting for the Xmas season and maximum commercial exposure during Oscar balloting. But will anyone pay attention, given Summit’s half-assed handling so far?

If you ask me a 12.21 NY and LA release for an arty-type, non-popcorn film indicates a limited and almost guarded approach. It almost feels as if Summit is dumping it. At the very best they’re indecisive.

They showed The Impossible to three or four L.A. journo-tastemakers in April, and I’ve been told it’s really good. It goes without saying that if they were truly behind The Impossible as a review-driven, awards-level thing they would open it in late October or November or early December, and possibly screen it at the Telluride, Venice, Toronto or New York film festivals to kick things off. But no — they’re giving it a token release in the midst of Xmas madness, just throwing it out there like two M&M peanut candies in the midst of a herd of elephants.

Summit is hoping to build a little heat when they release it wide (or at least wider) in January or thereabouts, of course, but audiences can smell hesitancy and indecision. Everybody can smell it like they can smell resolve and confidence and heat. You have to man up and release a movie like you really mean it. If you have a good film you can’t fart around and play tiddly-winks. You have to get up on that high diving board and do a jackknife or a one-and-a-half gainer and dive right into the pool.

And why is Summit still delaying on putting out an English-language teaser-trailer? A Spanish-language teaser-trailer has been kicking around since April. I met Bayona during the Cannes Film Festival and he showed me an English-language version on his iPad — it’s fine. Summit might be looking to assemble their own trailer, but their entire handling of The Impossible, which has been completed since March, has been tentative and ass-draggy and under-motivated. They acquired U.S. rights to the film in May 2010, but their mantra all along has been “hold on, we’re trying to figure this out…give us time!”

I tried to talk to Summit but they couldn’t be bothered. I’m guessing they want to focus on their big fall elephant, The Twilight Saga: Breaking Dawn, Part 2 — Back to Volterra and More CG Crap with the Volturi, which opens in November. Once that’s done they can focus on The Impossible.

The Impossible is a true account of a family swept up in the tsunami that slammed into the coast of Thailand and neighboring countries eight years ago. Naomi Watts and Ewan Macgregor are the stars. Geraldine Chaplin, Tom Holland, Gitte Julsrud and Marta Etura costar.

Bayona’s last film, The Orphanage, is one of the great adult horror films of the 21st Century. The same team that worked on The Orphanage (writer, production manager, cinematographer, composer and editor) reunited for The Impossible.

The Impossible was largely shot in Alicante, Spain and on location in Phuket, Thailand, beginning in the vicinity of May 2010.