“If you live in a town that had a budget crisis, that had to lay off firemen or teachers or policemen, or couldn’t provide services or textbooks in their schools, you know, that might be due to this,” Taibbi said. “Basically, every city and town in America, to say nothing of the rest of the world, has investments that are pegged to Libor.”

Sixteen gangsta banks, including Bank of America, JPMorgan Chase, and Citigroup, are facing possible prosecution for allegedly rigging the Libor, a defining kingshit interest rate that banks agree to and use to lend money to each other. Hundreds of trillions of dollars in loans and derivatives were set by Libor. It is believed that its manipulation possibly cost some cities and states many, many millions.

Every couple of years Hollywood Elsewhere enforces a Stalinist purge of the most belligerent and infuriating right-wingers, who hang around this place like rats. The first big one was in ’08, and then another one happened in September ’09. I’m thinking about another purge today because of some truly appalling rightwing, NRA-supporting sentiments heard in the wake of last night’s massacre in Aurora. I’m asking for readers to please identify those righties whom they feel have given the greatest offense. The whackings will happen this weekend.

Written by Andy Borowitz and posted this afternoon on The New Yorker‘s website. 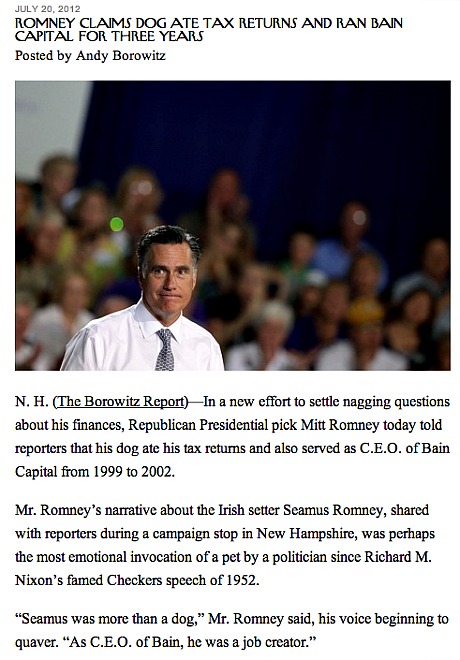 Yesterday I wrote that the new digital 4K version of Lawrence of Arabia that I saw in Cannes last May “looked as beautiful as ever, but it didn’t look as sharp and precise as I wanted it to look. The lenses and cameras used by dp Freddie Young in 1961 and ’62 couldn’t deliver the clarity and detail that you can see in films shot with the digital Red camera.” 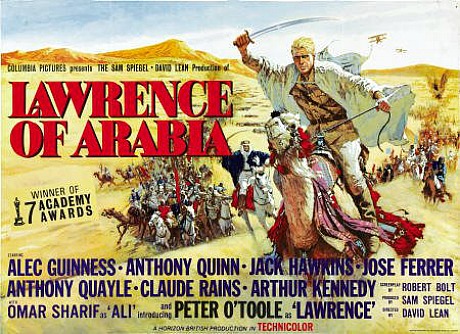 Which is true, but I saw the digitally restored version again at the Academy last night, and for whatever reason it looked slightly but significantly better than it did in Cannes. It was like like perfect 70mm candy. What I saw made me feel high, in a sense. It’s never looked more luscious.

A special huzzah for Sony”s Grover Crisp, who’s been working on the digital Lawrence upgrade for two years. I was shocked to realize that Crisp’s name doesn’t appear in the restoration credits at the end along with Robert Harris‘s and all the others. “Grover, your name isn’t in the credits…why?,” I asked him in the upstairs lobby. Crisp said he’s not big on taking credit and that seeing how well the film has turned out is satisfying enough. What a guy.

Before the screening I was told that the famous “lost” balcony scene between Jack Hawkins and Peter O’Toole — the one that begins right after Hawkins notices the blood streaks leaking through Lawrence’s military jacket and then leads him outdoors and says “tell me what happened” — will probably be included as an extra on the Bluray.

I suspected after 9/11 that air fares would drop sharply with no one wanting to travel, and I was right. A week or two later I bought a very reasonably-priced round-trip fare to Paris. By the same token I’ve been thinking that perhaps a certain percentage of moviegoers might not want to see The Dark Knight Rises this weekend after last night’s tragedy, and that I could slip in at the last moment and snag an IMAX seat. No such luck. Deadline‘s Nikki Finke says there’s been no slowdown at all today and that Chris Nolan‘s film might take in as much as $180 to $200 million by Sunday night.

In a piece that posted last night The Guardian‘s Ben Child quoted original “Bane” creator Chuck Dixon, who created Batman’s super-buffed antagonist for the 1993 DC Comics series Knightfall, saying that (a) both he and artistic collaborator Graham Nolan are “lifelong conservatives,” (b) Bane is “more akin to an Occupy Wall Street type if you’re looking to cast him politically,” and (c) “if there ever was a Bruce Wayne running for the White House it would have to be [Mitt] Romney.”

So I hope everyone (Rush Limbaugh included) understands the deal now. And you know what? The Dark Knight Rises is so good I don’t care. I said in my review that the Republican scent is there but the film is so mesmerizing, etc. (Tip of the hat to Movieline‘s Jen Yamato.)

Whoa…just realized something. If the “Republican fantasy” meme circulates among Academy members The Dark Knight Rises may not be nominated for Best Picture. That plus last night’s awful news leaves a bad taste in a vaguely associative way.

“I believe anthropologists and historians will look back on us and simply conclude that we were a violent nation, at home and abroad, but in due time human decency won out and the violence ceased, but not before many, many more had died and the world had had its fill of us.” — Bowling for Columbine director Michael Moore responding to last night’s Aurora shooting in a piece by TheWrap‘s Steve Pond.

Several reports and second-hand/heresay observations are saying that last night’s Aurora shooter, James Holmes, had his hair dyed red and that he was telling the cops that he was the Joker. So if this is true, Holmes didn’t murder with sincerity? He did it ironically, as a perverse performance-art piece? An hour ago I heard a young woman who was in the theatre when the shooting started tell an MSNBC interviewer everything she saw, heard and felt, and she didn’t mention the guy’s appearance at all.

Buzzfeed is reporting that the NRA tweeted the following greeting earlier today. Once they knew what a gaffe this was in the wake of the Aurora shooting they removed the tweet and then, according to Buzzfeed, deleted the @NRA_Rifleman Twitter account. How will HE’s rightwing commenters handle this one? Can’t effing wait. 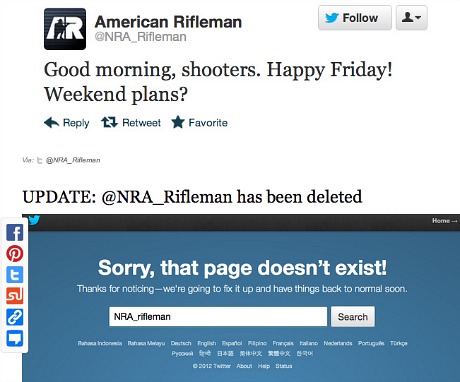 108 Comments
Land of the Wackos

“I thought it was a publicity stunt for a second there and then he threw tear gas over the crowd,” witness Paul Oterman told Sky News. “As soon as he let go of it I could feel it in my eyes and I could tell something was about to go really wrong, and then he started firing shots into the crowd.” And by the time the smoke had cleared at Century 16 in Aurora, Colorado, twelve people were dead. 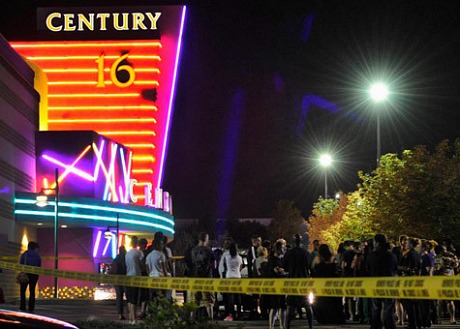 I overslept after last night’s Lawrence of Arabia screening at the Academy, and woke up to this 40 minutes ago.

Who didn’t silently nod when they heard about this and say to themselves “here we go again”? Or more to the point, “Only in the U.S. of A. — birthplace and nurturing ground of the suppressed rage mentality, the underground militant gun culture and the ‘going postal’ experience.” Is there another country in which something like this could have conceivably happened? Yeah, plenty. If your basic qualifying term is “conceivably.” But we all know the truth of it — wiping out people en masse is an American way of losing it and settling scores and bringing things to a climax.

It’s happened many, many times before. A nutter lives in the attic or the basement of the rural American experience, and sometimes he pops a cork. The dark, twisted side of the lone avenger/tough hombre mentality comes home to roost. I’m not like anybody else. One day they’ll see and they’ll know. One day they’ll pay the price. “One day a huge rainstorm will come down and clean all the scum off the streets”…or whatever it was that Travis Bickle said.

We all know the simmering Travis mentality, and that it’s not something you hear very much about in England or France or Italy or Germany. Okay, Norway…yes. Scotland or England, okay. But we own this shit. We are the father of it. That and our non-existent gun-control laws and the right-wing politicians who fight for the right of God-fearing Americans to buy automatic weapons and tear-gas canisters and bullet-proof vests.

There is a kinder, gentler, more compassionate way of life in other countries. I’ve been around and I’ve felt the vibe over there, and I’ve been around the rural areas of this country and felt the vibe also. If I could I would live overseas full-time and visit this country for extended stays. There is nothing uglier or more repellent than a well-armed American nutbag who just can’t take it anymore.

I’m sure we’ll hear before long that the assailant, 24 year-old James Holmes, posted thoughts on a blog or in a chatroom or on Twitter.

One of the injured was a three-month-old infant. What kind of lowlife parent brings a baby to a midnight show of a super-loud, power-punch action film? I’ll tell you what kind. The kind that says “I’m too young to stay home and miss out…this is my life and somehow I’ll fit the kid into that.”

Update: The notion of Warner Bros. execs thinking about possibly cancelling commercial shootings of The Dark Knight Rises, as reported by TheWrap‘s Sharon Waxman, is nothing short of ludicrous.