I don’t know why we can’t seem to record Oscar Poker on Sundays…we’re getting a little bit lazy, slacking off. I include myself in this equation. Aurora aftermath, lingering after-vibe — “Fear is irrational.” We discussed Hope Springs for a minute or two (i.e., could be decent, will make a lot of money, the under-served female audience). I mentioned the box-office prospects of The Campaign, and before you knew it we were into a whole big political thing. Here’s a stand-alone mp3 link.

I was thinking a day or two ago about how John Frankenheimer‘s The Train (’65) — the last Hollywood-produced action flick shot in black-and-white, and a reminder of how wonderfully alive and detailed monochrome could look — really needs to be remastered for Bluray. Jean Tournier and Walter Wottitz‘s cinematography is lighted and captured to perfection — it’s just heavenly, and I don’t what the hangup is. The last MGM Home Video DVD of The Train was created 13 years ago. 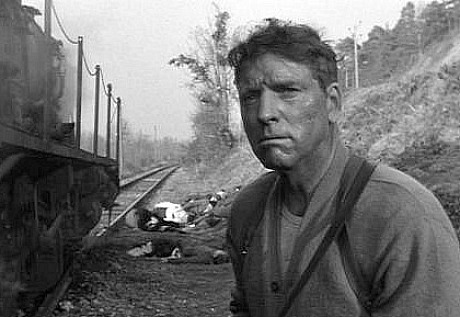 The Train is especially valued by me because of its 1.66 aspect ratio, which the 1.85 fascists….okay, I’ll restrain myself. One hopes that if and when The Train is Blurayed the fascists will consider the fact that all United Artists releases (which this was back in ’65) were projected theatrically at 1.66, and that The Train was issued on laser disc and DVD at 1.66. Anyway, I was imagining how I would feel if and when this Bluray were to be somehow Furmaneked, and how angry I’ll be if and when this occurs.

But today this anger went away when I read a nearly month-old article by Kyle Westphal about aspect ratios (called “Invasion of the Aspect Ratios“) on the Northwest Chicago Film Society’s website. It’s an an intelligent, perceptive, fair-minded essay, and it says some things that even the 1.85 fascists might agree with. Well, you never know. But I know it made me realize that at least some people out there get what’s really been going on with the aspect-ratio battles.

Here’s part of what Westphal said — fascists should consider the boldfaced portions:

“In some sense, it’s only natural that home video releases stir [highly emotional] feelings. DVD and Blu-ray versions tend to fix a film in time and space; the image is immune from the scratching and cinching that occasionally afflict film prints, but it’s also removed from the realm of interpretation and manipulation available to the projectionist or archivist. There’s no adjusting the focus or framing after a studio QC tech has ruled the matter closed.

“Magnificent Obsession is either 1.37:1 or 2:1, but not both. The recent vogue for 16:9 HDTV sets, which approximate fairly closely the 1.85:1 theatrical ratio, often dictates the ultimate answer, just as decades of 4:3 sets once assured a very different outcome, with the left and right edges panned-and-scanned away for cropped consumption. For asset managers and telecine operators alike, the question of the proper aspect ratio can yield but one valid answer.

“Longtime fans often dispute this answer. They recall television broadcasts or 16mm prints seen in decades-old campus film society screenings and the widescreen versions simply contradict the emotional and aesthetic unity they found in these open-matte prints. Trade papers and studio records may dictate a wide aspect ratio for a given film, but the fan holds onto details at the far reaches of the frame that look artistically indisputable.

“In some sense, this is the ultimate form of auteurism: the director intended things that the entire motion picture industry, from mogul on down to projectionist, conspired to cover-up. The great auteurs defiantly went about their business anyway. 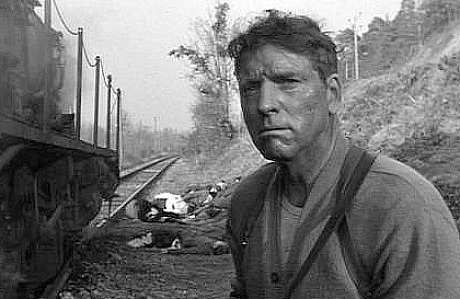 “What’s the right answer? We can argue about intent all day, but whose intent matters here in the first place? Is it what the studio dictated in their press book or what the lab printed in the leader? Is it what the director wanted on screen or what the cinematographer saw in the viewfinder? And what if that intent is deliberately confused or clouded? Famously, Paramount produced Shane in 1.37:1, but released it with a suggested ratio of 1.66:1 at the dawn of the widescreen era, fearful that its backlog product would look antiquated in wider pastures.

“Rather than jockey for the ‘correct’ aspect ratio for a given film, we should respect the multiplicity of possible answers suggested by material circumstances of the exhibition sector.

“During the transition to widescreen and again today in the waning days of the multiplex, the intended ratio (whether conjectured, intuited, or proven on paper) often ran up against the constraints imposed upon (and often by) the exhibitor. In the tumultuous year of 1953, studios weighed and hedged against various technological innovations (widescreen, 3-D, curved screens, magnetic sound, etc.) and announced new in-house aspect ratios before the autumn unveiling of Fox’s The Robe in Cinemascope and high-fidelity, four-track surround sound.

“Until the Society of Motion Picture and Television Engineers standarized non-anamorphic American productions to 1.85:1, the studios released product in a variety of ratios. RKO and Paramount preferred 1.66:1. Disney and United Artists suggested 1.75:1. Columbia and Warner Brothers put out 1.85:1 product. Universal-International released 2:1. These prints often looked identical to the naked eye, with the different ratios being entirely dependent on the proper lens and aperture plates for the projector. Surely these ratios prevailed at studio screening rooms but were these dictates respected anywhere else?

“Cinemascope was itself an expensive proposition, with many showmen balking at the high cost of equipping a theater for magnetic sound. Did exhibitors, historically disinclined to spend a cent more than necessary to get an image on screen, invest in equipment for all these variant ratios, especially when the anamorphic Cinemascope was the only one that carried any name recognition with the public?

“Paramount allowed its VistaVision prints to be shown at a number of different ratios, as the conceit of the brand had more to do with high-quality origination on an enlarged camera negative than with the final shape on screen. Anyone who’s seen an original 35mm IB Technicolor print from VistaVision elements will likely agree with Paramount’s reasoning.

“Aside from the investment in lenses, plates, and masking controls for these competing widescreen ratios, what of the inherent limitations of theater architecture? Whether working in former legitimate houses or purpose-built cinemas, the exact ratio on screen was often determined by relatively pedestrian factors like the throw distance between the projectors and the screen, the focal lengths of available lenses, the shape of the proscenium, the constraint of the curtain, and the pictorial sensibility (or lack thereof) on the part of the management. “

In disclosing the day’s second snooze-worthy announcement about The Master (i.e., that it’ll turn up at the Toronto Film Festival following its world premiere at the Venice Film Festival, which was announced earlier today), TheWrap‘s Steve Pond suggested that the breakup of TomKat may have been a factor in Harvey Weinstein‘s decision to open Paul Thomas Anderson‘s film in mid September rather than mid-October. Phillip Seymour Hoffman plays a sort of L. Ron Hubbard-type guy in the film, y’see.

When Pond asked his source “whether the Tom Cruise/Katie Holmes divorce had an impact on moving up the release date,” he was told “well, it sure as hell helps.” In other words, not really but it sorta goosed things along.

31 Comments
They Paid His Price

And that, in a nutshell, is why they call him Rade “Paycheck” Serbedzija. Respect the man, give him his due. He’s a musician and a jolly fellow with a twinkle in his eye (I’ve met him), but Hollywood keeps casting him as the same Serbo-Croatian-Russian-Slovo-Georgian sadist with a chip on his shoulder. And like his bucks-up Taken 2 costar, Liam “Paycheck” Neeson, he hasn’t the will to say no. 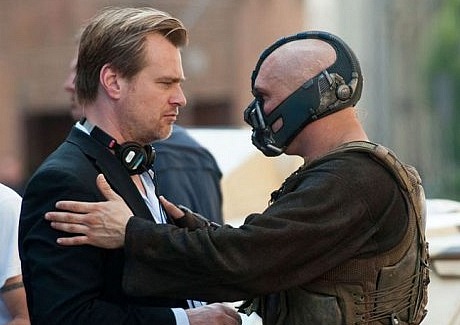 Hardy: “If I was a citizen I’d probably vote for Obama. Who do you like?” Nolan: “You probably don’t want to hear what I think, Tom…no offense. Just do your brute thing.”

If and when liberal Hollywood gets wind of this, they may once again choose to look the other way when it comes to the nominating process. Okay, maybe they’ll extend a little largesse if Romney loses in November but first they need to read Andrew Klavan‘s 7.29 Wall Street Journal piece and think things through.

The Dark Knight Rises “is a bold apologia for free-market capitalism and a graphic depiction of the tyranny and violence inherent in every radical leftist movement from the French Revolution to Occupy Wall Street,” Klavan declares, “and a tribute to those who find redemption in the harsh circumstances of their lives rather than allow those circumstances to mire them in resentment.”

What harsh circumstances are Mitt Romney types, plunder capitalists, the gangsta bankas and the LIBOR criminals enduring exactly, and what kind of redemption are they enjoying other than getting away with everything?

“None of these themes necessarily arises out of filmmaker Christopher Nolan’s politics, of which I know nothing,” Klavan writes. “Whatever his politics, he is an artist committed to creating, in Shakespeare’s words, ‘abstract and brief chronicles of the time.’ This is where Mr. Nolan’s honesty comes in.

“There are, after all, no socialist filmmakers in Hollywood. There are only capitalist filmmakers (Michael Moore, for one) who make socialist films. Likewise, none of the coiffed corporate multimillionaires who anchor the network newscasts can honestly support the Occupy movement which, taken to its logical conclusion, would result in their being hanged from lampposts.

“Yet while repeatedly tainting the free-market tea party movement with a racism it doesn’t espouse” — Tea Party scurvies haven’t shown racist colors? — “and linking it to violence it doesn’t commit, many creatives and journalists lend moral support to the socialist ‘occupiers’ –underplaying the widespread vandalism, lawlessness and grotesque anti-Semitism characteristic of their demonstrations.

“The Dark Knight Rises is a stinging, relentless critique of that upside-down and ultimately indefensible worldview.”

Peter Jackson lost HE points when he bowed to Warner Bros. marketing and turned tail on the 48 frame-per-second presentation of The Hobbit at ComicCon. (Which indicates, of course, that he and WB are probably going to limit 48 fps venues when it opens in December and characterize 48 fps as some kind of eccentric “experiment” rather than boldly call it the future of dumbass, Michael Bayo, CG-, fantasy- and action-driven cinema…which is precisely what it is and what Jackson and WB would call it if they were men). Now he’s lost even more points by officially announcing that The Hobbit will be a three-parter. Shameless huckster!

3 Comments
No Master in Telluride?

Deadline‘s Mike Fleming has written that he doesn’t “think” Paul Thomas Anderson‘s The Master (Weinstein Co., 9.14) “will play Telluride, where a lot of Oscar bait pictures screen in an unofficial capacity”…long faces if true! However, Fleming hears that the Toronto Film Festival “is a real possibility before The Weinstein Company opens the film September 21.” Except the commercial debut happens on 9.14. The Telluride letdown was included in a totally expected, almost snooze-worthy confirmation that The Master will debut at the Venice Film Festival.

I’m half-persuaded…okay, 33% persuaded that this Judd Apatow-sanctioned, “Bear Blitzer”-created Girls spoof could actually be a series. The same generational lethargy and cultural aesthetic applies all around, right?