Support on Patreon Follow @wellshwood
No Comments
After Hitchcock

For the most part Sacha Gervasi‘s Hitchcock, which opened the 2012 AFI Fest tonight, exudes a dry, whimsical tone that echoes Alfred Hitchcock‘s droll TV-host personality. And a feeling of scrupulous composition. But this is not about the making of Psycho as much as a love story about Hitch (Anthony Hopkins) and his wife and creative partner of 40 years, Alma Reville (Helen Mirren) and a crisis of fidelity that arose, the film says, during filming. The Hitchcock team decided, in short, to go for emotion, obsession and the facing of demons.

I respect and admire the decision to not make this a nuts-and-bolts “how it was made” film — it’s ballsy and depthy. And talky and often indoorsy and shadowy and MCU-ish. Which also fits the pre-Kennedy period and the climate and the older-marrieds-going-through-a-rough-patch narrative. It’s all of a piece.

Except it’s 1:30 am and I just feel too whipped to write a review, but I’ll expand tomorrow morning. In the meantime here are some post-screening tweets.

If I were a dictatorial Emperor of Hollywood I would give the five nominations to DDL, Denzel, Jack, Hawkes and Bradley Cooper. To hell with Pheonix and his creepy, whiskey-sipping, head-tilt, serpent-tongue routine…”neeeeeeee!!!” Trintignant is very good as the aging husband coping with the end, but somebody has to get chopped. Gere delivers his best performance since Primal Fear but…this doesn’t feel good. I don’t like cutting people. Nominate all eight. I don’t care.

No Comments
Times Rushes On

Jodie Foster, who played the 13 year-old Iris in Taxi Driver, will (a) turn 50 on 11.19.12 and (b) receive a proverbial gold-watch award Cecil B. DeMille Award at the 70th annual Golden Globes on 1.13.13. Hollywood Foreign Press Association president Aida Takla-O’Reilly told Variety that Foster’s “body of accomplishments is fantastic….she’s a fantastic person [and] a veteran because she started early, but she’s not done yet.” She’s not done yet? In other words, she’s closer to the end than the beginning but still plugging? Little Iris eating that jelly, sugar and toast in that diner with Travis Bickle…amazing.

Sacha Gervasi‘s Hitchcock (Fox Searchlight, 11.23) opens the AFIFest tonight at 7:30 pm with an after-party at the Roosevelt Hotel. I know that Helen Mirren‘s performance as Alma Hitchcock is going to be a home run, and I hope Anthony Hopkins, as husband Alfred, matches her. The only concern I have is that Hopkins’ face looks artificially padded — a bit unnatural. But I suppose I’ll get used to it.

I read a version of the script two or three years ago, and my sense of the film that might have resulted was that viewers would have to really know Psycho backwards and forwards to fully enjoy it. Chuckles, chuckles and more chuckles. I hope it’s like that. I hope it hasn’t been dumbed down.

It was announced earlier today that restored versions of Wiliam Wyler‘s Funny Girl (’68), Buster Keaton‘s The General (’26), George Stevens’ Giant (’56) and John Sturges‘ The Great Escape (’63) will play next April at the 2013 TCM Classic Film Festival. But having reported last January that Stevens’ Shane (’53) was being restored by Paramount for a 2013 60th anniversary Bluray, I asked festival programmer Charlie Tabesh if it might be included. He said that showing Shane had been discussed and while it’s not confirmed, he’s hopeful. I’ll be flabbergasted if it doesn’t happen.

Most mainstream animated features are philosophically kid-friendly or kid-nurturing. They push uplifting, socially optimistic, find-your-strength and fulfill-your-destiny messages. And they’re lively, amusing, cute, endearing. It would be nice if an occasional animated feature would deliver a counter-attitude or two. You don’t have to live a normal family life. People who live in prefab neighborhoods are robots. Greedy corporations are bad for the planet. All I know is, I’m sick of be-all-you-can-be themes. I want another WALL*E. Something poignant, socially critical. Or subversive.

I know that sophistos are telling each other than Wreck-It Ralph is an above-average thing, but I’m done with corporate-funded positivism. It feels Orwellian.

Those who are thinking of catching AFIFest screenings of Antonio Campos‘s Simon Killer on 11.5 or 11.7 might want to consider my review of this bleak, nihilistic film, which I posted during last January’s Sundance Film Festival:

“Late this afternoon I suffered through Antonio Campos‘ Simon Killer at the Eccles. It’s an empty, meandering audience-torture film about sex and nihilism and stupidity in Paris. Brady Corbet (the slightly dopey-looking guy who briefly boffed Kirsten Dunst on the golf course in Melancholia) plays a grungy-looking dork who seems ‘normal’ at first but then things turn dark and deranged as he morphs into a psychopathic dork.

“There are no resonating echoes or metaphors that add up in this bleak nihilistic film. Corbet is a recent college graduate who’s distraught about a breakup with his girlfriend of five years, and is visiting Paris to…whatever, hide out and do nothing for a while. Paris is a good town to do that in, but the appeal of Paris plummets if you’re stuck hanging out with an asshole.

“Corbet’s primary trait is that he’s obsessive. I saw him as a whiner with little cash and nothing on his mind except jerking off and fucking and money and extortion and hurting the women who like or love him. One of these is Mati Diop, a drop-dead beautiful cafe au lait girl who works as a prostitute and eventually lets Corbet stay with her because he’s broke, and who lets him goad her into a half-assed ‘john’ blackmail scheme.

“I didn’t relate to Corbet or get what he was about or anything. I hated his unshaven cheeks and chin and neck. I just sat there and watched…and watched…and nodded off for a few minutes…and watched a bit more. And then Corbet finally flew back to the States and it was over. 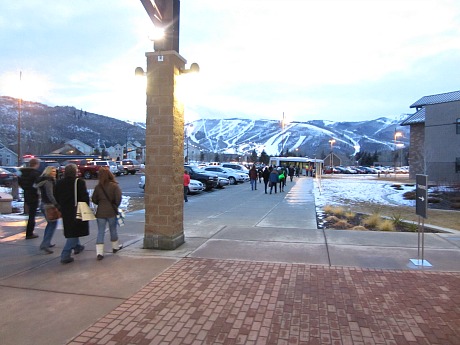 “I thought I might at least enjoy a few shots of Paris, but Campos and cinematographer Joe Anderson are very careful to show us nothing recognizable whatsoever. When Corbet is roaming around the camera is always focused on the back of his head and the rest is always in soft focus.

“The most memorable thing that happened during the screening was when I nodded out for five minutes. I was holding a half-filled can of Monster, and as I dropped off the can slipped my grip and hit the floor…clahk!…and rolled out of my aisle and into the next, dribbling green Monster juice as it went along. Attorney Linda Lichter and L.A. Times critic Kenneth Turan were sitting next to me, and I’m sure they wondered what the noise was. I avoided looking in their direction out of embarassment.”

Francis Lawrence, a proficient mid-level hack who did a decent job as director of I Am Legend (that Will Smith-kills-his-zombie-dog scene was fairly touching) and Water for Elephants and who has finished principal photography on the forthcoming Hunger Games: Catching Fire, has signed to direct the last two HG flicks — Mockingjay Part I and Mockingjay Part II.

It’s become standard corporate policy to stretch out popular franchises as long as possible by splitting or tripling the final installment. Two Mockingjay pics means doubling up on that income — shareholder cinema!

In his story about the Lawrence hiring, Deadline‘s Patrick Hipes mentions that Lawrence was chosen to direct Catching Fire “in a race that came down to Lawrence and Moneyball helmer Bennett Miller, after Juan Antonio Bayona couldn’t do it.” Nobody will ever convince me that Miller, the elegant helmer of Moneyball and Capote, was ever genuinely interested in directing The Hunger Games: Catching Fire. Directing a Hunger Games movie is a way of screaming from the rooftops, “I am a marginally talented journeyman who will never be in the big leagues, but I like the warm comfortable feeling that comes from being well paid.”