It would appear that JJ Abrams‘ Star Trek: Into Darkness (Paramount, 5.17.13) is enveloped in some kind of apocalyptic wasteland along with a time travel flourish of some kind. It would therefore appear that things are going to be grim, grim, grim all over due to “an unstoppable force of terror from within their own organization,” leading Captain Kirk to “lead a manhunt into a war-zone world to capture a one-man weapon of mass destruction,” etc. 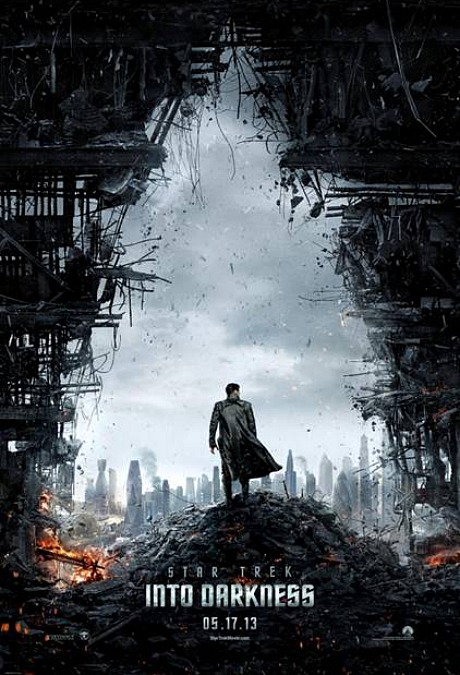 Paramount’s The Guilt Trip (12.19), a road comedy about a 60ish widowed Jewish mom (Barbra Streisand) and her downbeat inventor son (Seth Rogen), was snuck Sunday afternoon at the AMC Century City. No reviews until later but it wasn’t half bad — adult laughs, low-key tone, character-driven, no vulgarity, not classic but likable and entertaining and occasionally heartfelt. Pic was exec produced by Rogen and Streisand, directed by Anne Fletcher (The Proposal) and written by Dan Fogelman.

Rogen and Streisand showed up after the screening and did a live q & a that was close-circuited to other theatres. The crowd was packed with impassioned, eager-beaver fans of Streisand’s albums and particularly of Yentl.

Rogen plays an inventor, Andy Brewster, who’s trying to sell a natural-elements cleaner to the big chains without much success. When he discovers that the beloved ex-boyfriend of his widowed mom, Joyce (Barbra Streisand), is living and working in San Francisco, he invites her to join him on a cross-country trip as he tries to sell his cleaner (which has a really hard-to-remember name that kinda sounds like Science Cleaner but is actually Scioclean or something like that) so they can wind up in San Fran and reunited with the old boyfriend. And yet the way Joyce nags and nudges pisses Andy off and puts him in a bad mood half the time. 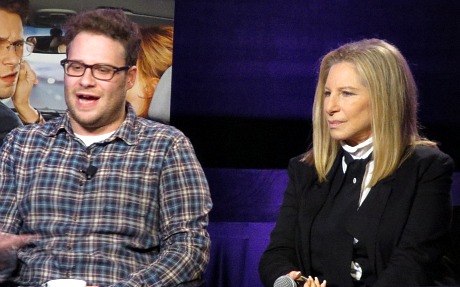 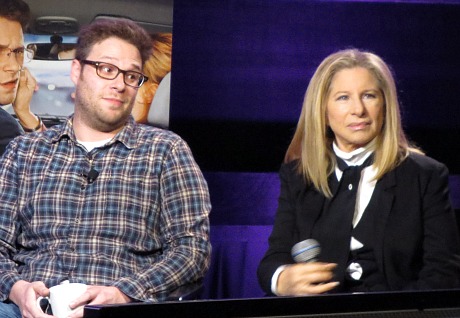 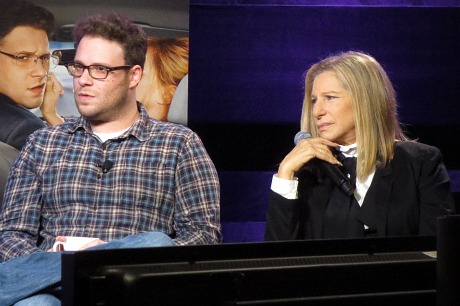 Silver Linings Playbook helmer David O. Russell is the possible weak sister among the projected Best Director Oscar nominees? I really, really don’t think so despite Vulture‘s Kyle Buchanan having concluded that Ben Affleck, Steven Spielberg and Tom Hooper are “already absolute locks…aren’t they?” No, they aren’t. Not all three, I mean. Buchanan is reading two-week-old leaves.

Affleck, yes, but Hooper? Surely Buchanan has heard of the Les Miz blowback by now. And Spielberg? Why, because Lincoln is his best film since Schindler’s List and he needs to be rewarded for not succumbing to his usual instincts? Or because he and Jaunusz Kaminski went completely whole-hog on that milky white light flooding through the non-existent windows in the U.S. House of Representatives chamber? Or because he’s worth $3 billion and Academy members will receive a kind of goodwill dividend if they nominate him?

In last night’s Zero Dark Thirty riff I didn’t mention the eerily riveting score by Alexandre Desplat. It conveys appropriate doses of menace and anxiety, but in a way that perfectly suits or matches the film’s low-key, docu-drama-ish authority. Ironically the music in this clip is one of the few portions that seem a bit rote. Desplat also did the score for Argo.

“Basically I prepare for a role in the same way every time,” Chris Walken tells The Guardian‘s Sean O’Hagan in a 12.1 interview. “I take the script, I stand in my kitchen and I quietly mumble it to myself. Over and over. I keep doing that until I hear something in there. I was trained as a dancer and that stuck with me, so I’m essentially looking for a rhythm. For me, acting is all to do with rhythm. When I figure stuff out, it has to do with finding the rhythm. Always.”

“Walken grew up in Astoria, Queens, the kind of second-generation, melting-pot neighbourhood that has long since vanished in New York,” O’Hagan writes. “He once told an interviewer he ‘grew up listening to people speaking broken English…and I probably speak English almost as a second language.’ This may be the real key to his strange, almost stilted, delivery, alongside the fact that he made an early decision as an actor to wilfully disregard punctuation when reading his lines, a quirk that he guessed rightly would set him apart.”

O’Hagan misspells “willfully” in that last sentence, using only one “l” instead of the two preferred by Merrian-Webster.

Correntin Charron‘s Un petit plat pour l’homme is hereby dedicated to a friend, editor-screenwriter David Scott Smith, for reasons he’ll immediately recognize. I guess I should co-dedicate the link to MSN’s James Rocchi, who’s also a bit of a foodie. The English title is One Small Dish for Man.

For $14.98, you can now pre-order a forthcoming Bluray of Michael Mann‘s The Insider. It ships on 2.19.13, or two and a half months hence. I’ll take it, thank you, beggars can’t be choosers. But there’s something demeaning about this great 1999 film being sold to the public via Walmart. I’m asking around as we speak, but if there’s a God it will contain some decent extras. If any film cries out for a deluxe Criterion release, it’s this one. The 2000 Touchstone DVD was strictly bare bones.

The headline implies that I’ve noticed saliva spray coming from the great Al Pacino in the midst of one of his anti-corporate tortious interference rants. Not true. It’s just that I’ve never forgotten the flying missiles when I caught his lead performance of American Buffalo at a downtown Manhattan theatre 30-odd years ago. Nor have I forgotten a critic writing about same during a performance of Richard III, and quoting a line from that play in the bargain: “Why dost thou spit at me?”

“Even after a relentless, decade-long pursuit that leads to the daring midnight raid of Osama bin Laden’s compound, even as she unzips the body bag to verify that the bloody corpse inside is indeed that of the slain al-Qaida leader, Jessica Chastain‘s Maya, a CIA officer, is defined primarily by her femininity in this male-dominated world.

“It’s probably a phenomenon Kathryn Bigelow unfortunately is acquainted with herself, being the rare woman in Hollywood making muscular action movies — including 2009’s The Hurt Locker, winner of six Academy Awards including best picture and director, the latter being a first for a woman. And so even as Zero Dark Thirty takes an aesthetically stripped-down look at a hugely dramatic event, it shines with the integrity and decency of its central figure: a fierce young woman who’s both dedicated and brainy, demanding and brazen.” — AP critic Christi Lemire.

In other words, Zero Dark Thirty is as personal for Bigelow and as much a piece of self-portraiture as Vertigo was for Alfred Hitchcock.