I think it’s time to forgive Ordinary People for winning the 1980 Best Picture Oscar, and thereby denying that honor to Martin Scorsese‘s Raging Bull. I’m not arguing that the Scorsese isn’t a much bolder, richer and less schematic film. Everyone reveres it. I own a Raging Bull Bluray and have watched it a good nine or ten times. It’s just that I saw Redford’s film this evening and to my surprise it really got me. I’d forgotten how sad some of the scenes are. It’s too tidy and well-ordered, okay, but so well acted.

If nothing else Ordinary People taught the entire world to hate Mary Tyler Moore, the frigid, buttoned-down bitch of the suburbs. It defined her career. Her Beth character all but wiped out everything she’d done before on TV and certainly everything she did after. Beth’s example probably did a lot to open things up with all the real-life Beths out there. A lot of them probably said to themselves during a tough moment, “Wow, I’m turning into Mary Tyler Moore in Ordinary People.”

Aristotle didn’t tell the half of it. That faintly wild glint you’ll find in the eyes of almost all creatives is also in the eyes of most sociopaths (obviously except for those with dead shark eyes). It’s pretty much the same spark, the same faint irreverence or provocation or hint of an eff-you attitude. The difference is that creatives have an ability to distill this attitude into something clear and illuminating (or at least a potential to recognize and refine this ability). The lack of this is what guarantees that most criminals will live a shit life. 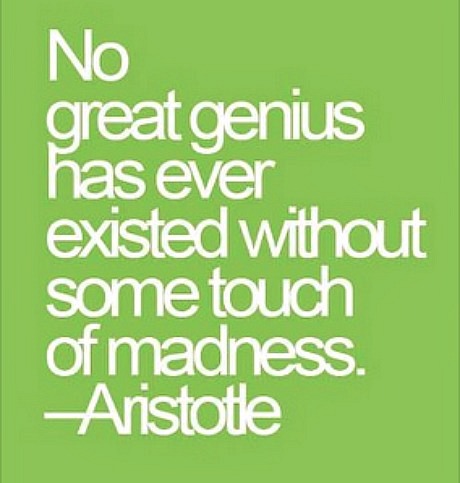 I say this as one who has a touch of that glint. I suppress it, of course, because it doesn’t help to flash it around in mixed company. I’ve also noticed the lack of this glint in more industry creatives than you might think.

27% of the Rotten Tomatoes gang has taken a dump on Les Miserables. But it opened huge yesterday, the fan base is really passionate, and it’ll make a lot of money. It’s been in theatres two days so what are HE regulars thinking? Is it too much of a mixed bag to win the Best Picture Oscar, or does it have a chance regardless? 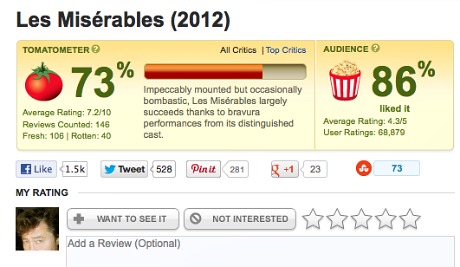 During yesterday’s downtime I listed my favorite film performances from the late Charles Durning, who passed on 12.24 at age 89. Jack Amsterdam, the corrupt fixer-politician, in True Confessions. Det. Sgt. Eugene Moretti, the cop-negotiator in Dog Day Afternoon. The jovial song & danceman Governor in The Best Little Whorehouse in Texas. And Lt. William Snyder, the bunko detective from Joliet, in The Sting, “searchin’ all the joy houses ’till I find him.”

I never saw Durning perform on stage. I’m especially broken-hearted that I never saw him in the Public Theatre presentation of That Championship Season. I interviewed him sometime in the mid ’80s at his place on Wilshire Blvd near Westwood. I remember his talking about “wise guys” he knew in the ’30s, and how they had “the glint of madness” in their eyes. And he was quite the movie buff. He had piles and piles of VHS tapes of all the great films, or most of them.

Durning’s N.Y. Times obit quotes a Parade interview in which Durning recalled a hand-to-hand combat episode during his World War II. “I was crossing a field somewhere in Belgium,” Durning said. “A German soldier ran toward me carrying a bayonet. He couldn’t have been more than 14 or 15. I didn’t see a soldier. I saw a boy. Even though he was coming at me, I couldn’t shoot.”

They fought and rolled around, and Durning was stabbed eight or nine times with the bayonet before he finally picked up a rock and slammed the kid repeatedly until he was dead.

Can anyone imagine this scene being re-enacted in a war film in a satisfying way? 98% of the audience would be thinking “what the hell is wrong with that G.I.? We don’t care how old the kid is. He has a bayonet…waste him!” The screenwriter wouldn’t write it, and if he did the director wouldn’t film it because it doesn’t work. The only thing this scene would accomplish would be to persuade the audience that the Durning character is some kind of sentimental, unreliable flake. But that’s the difference, I’m presuming, between brutal real-life combat and the more clear-cut kind in war movies.

“Mr. Durning said the memories [of kiling this kid] never left him, even when performing, even when he became, however briefly, someone else,” the Times obit says.

“There are many secrets in us, in the depths of our souls, that we don’t want anyone to know about,” During told Parade. “There’s terror and repulsion in us, the terrible spot that we don’t talk about. That place that no one knows about — horrifying things we keep secret. A lot of that is released through acting.”

I loathe Christmas Day to start with but yesterday was a record-book downer with the site blocked by Google (and flagged as a trouble spot by Firefox) for about 13 or 14 hours because of some malevolent Kazakhstan-based predator who sent out a trojan missile on 12.24 that manifested in God knows how many dozens or hundreds of websites. I begged three tech-support guys with my ISP Softlayer for any constructive help in the wee hours of 12.25, and they all said “sorry but it’s your problem — we just provide the bandwidth.”

The Godzilla trojan infected my ad server, it was finally determined. The only way to remove the Google block was to remove the ads and disable the ad server and then inform Google that I’d done this. They finally removed the block late yesterday afternoon. The ad server is being scrubbed and cleaned as we speak. The ads will presumably return before the day is out.

It didn’t feel awful to be out of business for a day. It just felt like…nothing. Stalled, neutered. I knew the problem would be remedied and over by sometime today.

So after sweating it out for 8 or 9 hours (plus a four-hour sleep break) I roused myself, picked up some Indian takeout and chilled at my girlfriend’s home. For the most part that meant suffering through a DVD screening of Brave. I’ve experienced moments of satisfaction and even uplift from the best Pixar films, but nothing suffocates my spirit like a glossy, connect-the-dots mainstream animated feature (i.e., big-name actors doing the voicing) looking to sell an empowerment fable about a young person being tested and fulfilling his/her destiny. I half-liked the big cowardly bear but it went no further. Every exaggerated expression and every gut-slam visual or aural effect felt like a tiny cyanide capsule. Give me a sword to hold as I jump into the wolf pit.

There is a certain Chicago life form who yesterday cheered Hollywood Elsewhere’s temporary misfortune. Exchanging blows in comment threads or on Twitter is part of the normal rough and tumble. But when you’ve been sidelined, most non-scumbags understand the basic Marquess of Queensberry about hostilties ceasing until you step back in, blah blah. But this is what we all love about the web, right? Mixing it up with halitosis creeps we’d cross a street to avoid if they were approaching, tossing this or that grenade and feeling low and filthy for the effort.