In a 12.27 “Top Ten Worst movies of 2012” piece, Rope of Silicon‘s Brad Brevet has called Joe Wright‘s Anna Karenina a “dud.” No, it isn’t. It’s a brave and visionary film (in my view the bravest film of the year) that people with Brevet’s sensibility have, to their profound shame and discredit, tried to characterize as some kind of dud embarassment with a litany of flip, snarky comments.

There should be laws and prosecutions and penalties for this kind of thing, I swear to God.

Anna Karenina is in no way, shape or form a shortfaller. The shortfallers, trust me, are the critics. It’s a “serious, drop-your-socks knockout — the first truly breathtaking high-style film of the year, a non-musical successor to Moulin Rouge and a disciple of the great ’70s films of Ken Russell (and by that I mean pre-Mahler Russell, which means The Music Lovers and Women In Love) as well as Powell-Pressburger’s The Red Shoes,” as I wrote on 9.6.12. 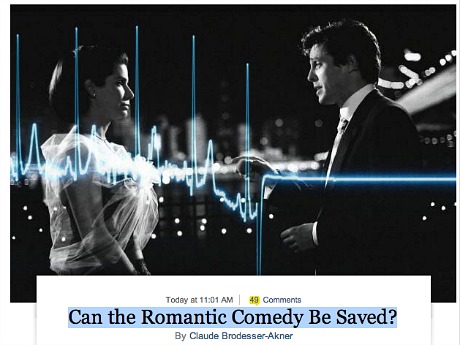 Amour and Silver Linings Playbook “are as different from each other in mood, look, feeling, cinematic technique and visual style as is possible to find in theaters,” Dargis observes. “[And yet] both are love stories. One shows love and a shared life at their inception; the other shows life, and the love that it sustained, ending. How Mr. Haneke and Mr. Russell convey the central relationships in their movies opens a window onto how each director expresses meaning through the dialogue and the performances; through human gestures and camera moves; through what is inside the frame and how everything in it is arranged (carefully or with feigned informality); through editing and its rhythms; through music or its absence.”

Dargis finishes by comparing two sitting-at-a-table scenes featuring the male and female leads (Bradley Cooper and Jennifer Lawrence in Silver Linings, Jean-Louis Trintignant and Emmanuelle Riva in Amour), and how the former is a beginning and the latter is the beginning of the end.

I’m posting this and providing the link because it’s a very wise and well written piece, and also, to be honest, to make things a little more difficult for the SLP haters. Anything I can do to denigrate, diminish or otherwise take this crew down, I’m there.

Today I ordered an English Bluray of Liliana Cavani‘s The Night Porter, which in my book is probably the most artistically valid expression of the Nazi-Fascist Perversion cycle of the early to mid ’70s. (Along with Salo and 1900, I suppose.) This scene is arguably the iconic-erotic highpoint of Charlotte Rampling‘s early career. I’m 90% sure someone is now going to write in and say “thanks for the warning…watching this video could get me fired!”

I’m sorry if the title of this post has struck some as vulgar, but (a) I love the sound of it and (b) with what other story or riff could I use it?

The best part of this Throck Morton video is the gas station fill-up. The LACMA Kubrick exhibition tour portion isn’t riveting, but it does give you a pretty good idea of what it is. The fisheye-lens headcam delivers reasonably good quality. I intend to purchase one for my own adventures. I’m thinking of visiting the LACMA Kubrick show sometime this week. I saw the show at the Cinematheque Francais in May 2011, and reported as follows:

“The Stanley Kubrick exposition at the Cinematheque Francais is a very thorough, abundantly detailed and absorbing presentation of Kubrick’s 54-year career, beginning with his photographer period (which began in 1945 when he took a shot of a newsstand proprietor looking forlorn the day that FDR‘s death was headlined) all the way through his last film, Eyes Wide Shut, and including exhibits from the three movies he worked like hell on but never made — Napoleon, A.I. and The Aryan Papers (which was killed by Schindler’s List).

“The icing on the cake is that the Cinematheque has gone the extra mile to put you in the mood — calling its restaurant the Korova Milkbar, laying a replica of the Overlook Hotel carpet on its floors, selling little red Lolita glasses in the gift shop, etc. A Clockwork Orange is screening this evening (i.e., right now) and there were six or seven fans dressed like Alex’s droogs (bowler hats, white shirts and pants, black boots) sitting outside at a table a couple of hours before.”

Here’s another amusing Throck Morton piece that deals in part with Merchant-Ivory and Howard’s End.

I told a friend that I had a dream the other night, and in it a well-known critic was murdered. It was a horrible dream. A kind of nightmare really. The friend suggested that the critic was being dispatched because he’s a fan of Lincoln. I laughed and said “that’s funny,” but I reminded her that I’ve never hated Lincoln. I hate the Lincoln Best Picture talk — that’s the difference.

I reminded her that I gave Lincoln a passing grade in my initial review….a pass with reservations. A good, intelligent film that is also a doleful, talky, slow, ponderous civics lesson. Plus that hateful Janusz Kaminski lighting scheme as a kicker. Yeesh.

“But there are worse films than Lincoln that could win Best Picture,” my friend replied. “Good intentions and all of that. Lincoln has made $120 million at the box office and is the highest grossing film so far of the Best Picture nominees. You can’t just discard that.”

My response: “People are going en masse because the legend of Abraham Lincoln has been drilled into them since they were 7 or 8 years old. It’s not the movie, really — it’s the man and the Steven Spielberg brand assurance and the Daniel Day Lewis performance. Nobody is truly aroused or turned on by that film…no one. They’re going because they feel it’s something they ought to do — it’s a kind of cultural duty — and because it’s about the great Abraham Lincoln and because they know that all Spielberg films are safe and schmaltzy and intelligent in their fashion.

“And so they go and they sit and watch like an obedient congregation, and then the lights come up and they stand up and trudge out with those blank or grim expressions (I’ve seen them so don’t tell me), and they tell each other afterwards that DDL was really good (which he is) and yaddah-yaddah. Lincoln is no one’s idea of an ecstatic or rousing or head-turning experience. You know it and I know it. It’s a kind of homework movie that audiences feel they should go see because we’ve all received the Lincoln legend, and we don’t feel we can ignore it or wait for the DVD or the Netflix download.

“It’s a better-than-decent film, I agree, but people have gotten carried away by the awards talk and because they’re saying ‘how can we go wrong if we give the movie about the great Abraham Lincoln our Best Picture award?’ It’s on that level rather than ‘oh,my God, this film is so great…I’ve seen it three times and I could see it again.'”

77 Sunset Strip and its three Warner Bros. TV spinoffs — Bourbon Street Beat in New Orleans, Hawaiian Eye in Hawaii, and Surfside 6 in Miami — came up in conversation the other night. Four versions of the same detective agency show — essentially the same characters, same colorful sidekicks, same wisecracking secretary. The 77 Sunset Strip scripts were sometimes re-dressed and re-shot for Surfside 6 or whatever. I’ve read that even an occasional cast member from one series would show up in a guest capacity on another…is that true?

The geographical location of the non-existent 77 Sunset Strip office (as well as Dino’s Lodge, the next-door restaurant that actually existed and thrived for 20 years) was at 8532 Sunset, on the south side of Sunset between La Cienega and Alta Loma. The post-premiere after-party for Vincente Minnelli and Glenn Kenny‘s Some Came Running was held at Dino’s Lodge.

Here’s an idea for an honest-to-God 2013 cable TV series. Three slacker-stoner layabouts in their late 20s are time-transported back to a black-and-white 1959 world, and not as losers but as the new 77 Sunset Strip guys. And they get to play games and drive around in T-birds and live these totally cool private-eye slickster lifestyles, booze and babes and fast cars and penthouses, and they also get rich by betting on sports events that they know the winner of. Maybe they also get to influence other historical events…or not.

You could go any which way but the basic idea is that three no-direction-home 2013 guys are “saved,” in a sense, by being thrust into the distant past and being forced to live in a black-and-white world in which they have all the advantages and then some. All kinds of opportunities for frolic and perversity, not to mention reflections on the evolution of our culture over the last 50 years. But it wouldn’t work unless it was shot in black-and-white within a 1.37 to aspect ratio.

This is my idea — I just want to make that clear. Whatever happens, I get a piece of the action.