The only time Harry Carey, Jr. half-got me was when he played young Dan Latimer in Howard Hawks‘ Red River (’48). He’s on his horse, gently calming the herd…”whoa, dogies, whoa”…when Tom Dunson (John Wayne) and Matthew Garth (Montgomery Clift) come up to chat. Latimer tells Dunson that when they reach Missouri and everyone gets paid he plans to buy his wife a pair of red shoes.

An hour later the cattle go on a stampede and Latimer is trampled to death. They find what might be his body but can only presume it’s him because he was wearing a checkered shirt. Dunson tells Garth to give full pay to Latimer’s wife, “just like he finished the drive…and, uh, … anything else you can think of.” Garth replies, “Like a pair of red shoes?”

And that was it. Carey never had a better part or brought it home in as an actor quite as fully. He wasn’t a great performer, just a good-enough one. But getting stomped into mulch by hundreds and hundreds of cattle hooves, godawful as that experience had to be, gave him dignity, or gave it, rather, to poor Dan Latimer.

Carey’a becoming a regular in the John Ford hambone stock company from the late ’40s through the mid ’60s sealed his fate. All he could do was play amiable or spirited second bananas on horseback.

Harey Carey, Jr. was a very well-liked fellow. On this point agreement was wide and far. Much of his likability (among boomers, at least) came from his playing the kindly ranch counselor Bill Burnett in the Walt Disney Mickey Mouse Club serial The Adventures of Spin and Marty. He made three other films with Hawks — Monkey Business, Gentlemen Prefer Blondes and Rio Bravo. He lived a long and fruitful life, and died today at age 91. God rest his soul. 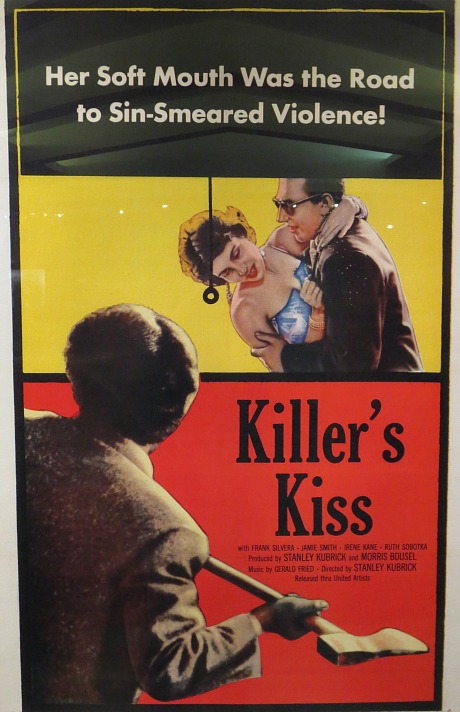 I know the 1950s are generally regarded as a moderately prudish or at least somewhat restrictive era in terms of sexual content in movies, TV and advertising. But I doubt if any copy for a 2012 one-sheet would allude to a woman’s “soft mouth” for fear of sounding soft-porny. This poster is currently hanging in the Academy’s main lobby as part of a general Stanley Kubrick exhibit. 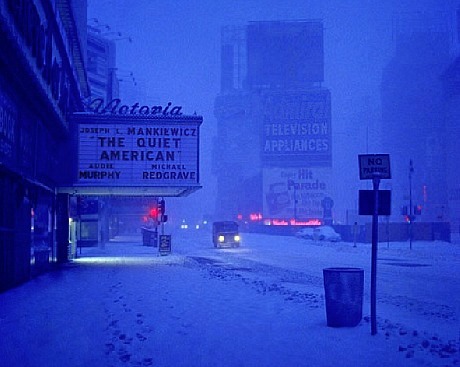 I’ve run this photo once before. It may be my all-time favorite Times Square capture. I love the blizzard-covered atmosphere, or the blizzard-at-6-am atmosphere or whatever it is. Joseph L. Mankiewicz’s The Quiet American opened in early February of 1958. 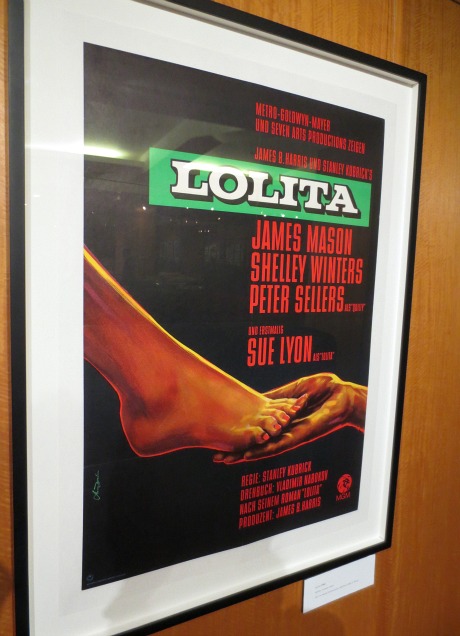 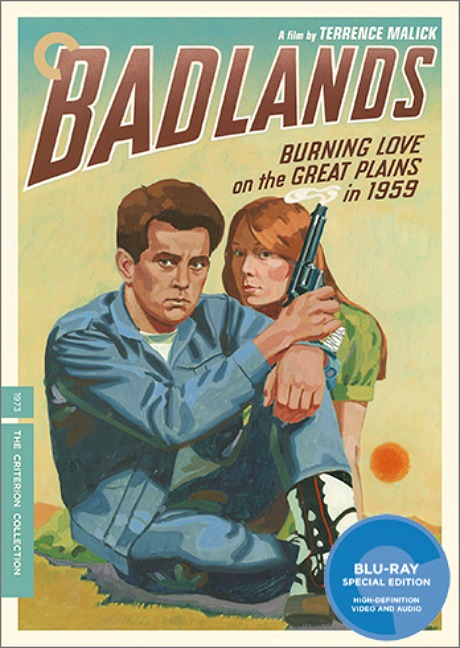 I don’t know for a fact that this WHV DVD presents the definitive full-frame, open-matte version of Terrence Malick‘s 1973 classic, but it sure looks good. I’ve watched it three or four times and can tell you it has acres and acres of spacious headroom.

What happened to The Guilt Trip, the Seth Rogen-Barbra Streisand relationship comedy that opened nine days ago and has…what, fizzled? It was killed by 64% of the Rotten Tomatoes critics and has only made a lousy $14.5 million since opening nine days ago so I guess you can call it a bit of a wipe-out. Okay, a shortfaller. It’ll probably end up with…what, $25 million? It cost $40 million to produce plus distribution and marketing costs.

Nobody wants to watch a dramedy about a Jewish mom badgering her emotionally aloof son, right? Looked a little sleepy? Not funny or novel enough? Streisand used to be a draw, but she’s been out of the leading-lady game since the mid ’90s. I think it’s telling that I forgot to run a Guilt Trip review when the embargo broke. I was okay with it. I just forgot. Okay, I couldn’t muster the energy to write it. I guess that’s why it died. Nobody cared that much.

Pic was exec produced by Rogen and Streisand, directed by Anne Fletcher (The Proposal) and written by Dan Fogelman.

It’s basically a Jewish mother-and-son car trip movie. Rogen plays an inventor, Andy Brewster, who’s trying to sell a natural-elements cleaner to the big chains without much success. When he discovers that the beloved ex-boyfriend of his widowed mom, Joyce (Streisand), is living and working in San Francisco, he invites her to join him on a cross-country trip as he tries to sell his cleaner (which has a really hard-to-remember name that kinda sounds like Science Cleaner but is actually Scioclean or something like that) so they can wind up in San Fran and reunited with the old boyfriend.

And yet the way Joyce nags and nudges pisses Andy off and puts him in a bad mood half the time. The film has a nice ending, though — I’ll give it that. Adult chuckles, low-key tone, character-driven, no vulgarity, not classic or landmark but likable and moderately entertaining and occasionally heartfelt.

I was grateful for Rogen’s low-key personality, although he plays it a little too somber and dour here and there. I was grateful that it didn’t go all crude and sloppy in search of lowest-common-denominator animal laughs.

I saw The Guilt Trip 27 days ago at a special invitational screening in Century City that Rogen and Streisand attended. 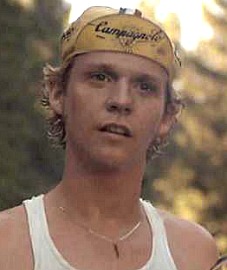 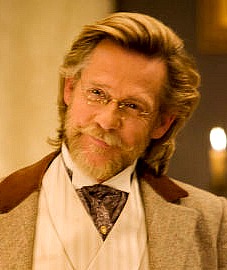 Scott Feinberg‘s 12.27 Hollywood Reporter story about how Academy members are having difficulty with online Oscar voting (possibly due to forgetting passwords, but with more than one industry source describing the site as a “disaster,” says Feinberg) is the equivalent of a weatherman reporting rainshowers on election day.

It simply means that some of the older voters (who tend to vote in a conservative, status-quo, go-along way) might possibly throw up their hands and not vote, which probably means a slight weakening of support for lazy-default favorites like Lincoln, Life of Pi and Les Miserables. I can’t imagine what else it might portend. Older people have always had and always will have trouble with passwords and whatnot, and software guys always have and always will create websites that they know deep down will give a bit of grief to low-tech, slow-on-the-pickup users. They’ll never admit it, but software guys enjoy this on some deep perverse level.

There are only five blazingly well-crafted, obviously levitational 2012 films that truly deserve to be Best Picture nominated. Not eight, seven or six…five. One of these is Michael Haneke‘s Amour, although I’m presuming it’s been relegated in most minds to the Best Foreign Language category. The second of these, Leo Carax‘s Holy Motors, has barely been seen and hasn’t a chance. Joe Wright‘s Anna Karenina has been seen, but has been widely dismissed by too many critics (to their eternal discredit) that it’s almost certainly a non-starter.

That leaves Kathryn Bigelow‘s Zero Dark Thirty and David O. Russell‘s Silver Linings Playbook. These are the only two main-event sluggers with that special blend of craft, command and transportation that people remember decades later.

The Gold Derby “experts” who are currently asserting that Lincoln‘s Steven Spielberg is in the lead position for Best Director know a lot less than you might think. In my mind they’re lazy defaulters who are hanging out in the lobby and going “I don’t know but I guess this is how the dullest people are thinking…right?” You can’t give a Best Director Oscar to a hack billionaire whose next film will reportedly be Robopocalypse just because he made a good Abraham Lincoln film. Try to restrain your impulse to show obeisance before power. You will not receive a check in the mail if you vote for Spielberg and he takes the Oscar.

The Stalinist-committee claim that ZD30 should be dismissed because it endorses torture is one of the most vile p.c.-hysteria charges in Hollywood history. But it has stuck to the wall because too many people are letting the sound bite into their heads without considering the particulars, and because Sony management has apparently decided to let ZD30 absorb the slings and arrows without rushing to its defense.

I’ve said more than enough about Silver Linings so let’s let it lay, but it’s the only contender that really generates its own kind of energy and delivers according to its own particular personality terms, and which offers a kind of social-cultural undercurrent (i.e., we’re all crazy-hyper under the skin) that lingers after the credits.

Tom Hooper‘s Les Miserables is madly, wildly loved thing that has alienated too many people (i.e., roughly 25% to 30% of critics and industry types), although it does come together exceptionally, I feel, during the final 40 minutes.

If you separate the performances by Daniel Day Lewis, Tommy Lee Jones, Sally Field, James Spader and David Strathairn, watching Steven Spielberg‘s Lincoln is like listening to the tick-tick of a grandfather clock.

Ang Lee‘s Life of Pi will be Best Picture-nominated in order to round out the field — let’s leave it at that.

Paul Thomas Anderson‘s The Master is a major auteurist-muscle-flex film with a lead performance (i.e., Joaquin Phoenix‘s) that combines anti-social alienation and alcohol-sipping with the behavior of slithery, tongue-flicking serpent-geek, and which peaks somewhere between the halfway and two-thirds point and doesn’t really come together in the end.

Quentin Tarantino‘s Django Unchained is an ugly cheeseball exploitation film that uses slavery as a protection-pass cloak that permits QT to wallow in all kinds of wink-wink blood, venality and racial venom for close to two hours and 40 minutes.