Before driving down to the police-state fortress that was the Beverly Hilton and the Golden Globes awards, I spent two and a half hours on my back underneath a friend’s house, crawling around inside a sprawling dark space that was maybe 20″ high and wearing a surgical mask and a hat and tinted shades as me and two other guys put pink insulation strips between the floor beams. There were piles of dirt on top of the cross breams and every time we pushed through the strips soil poured onto my head, face and neck. I felt like Charles Bronson as Danny the tunnel king in The Great Escape. 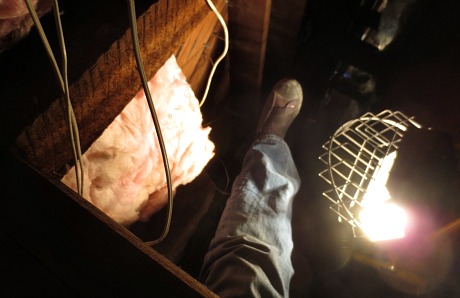 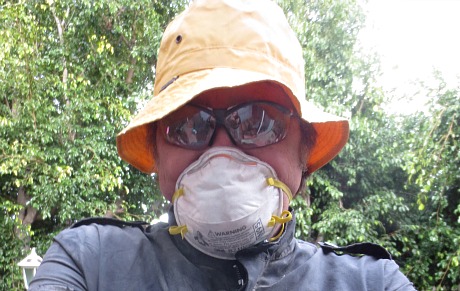 I don’t know for a fact that Steven Spielberg arranged for Bill Clinton to come to the Golden Globes and speak admiringly of Lincoln the president and Lincoln the film. But it seems like a pretty good guess that he did. Bill was eloquent as usual, but what was the effect of his testimonial? People realized that Spielberg wants Oscar glory really badly this time, and will cash in any I.O.U.’s, political or otherwise, that might help in this regard.

Argo winning Best Motion Picture, Drama and Ben Affleck winning for Best Director tonight came right on the heels of the BFCA Critics Choice awards deciding to give the same awards, and I think that tore it. I think everyone except for the Lincoln die-hards realized tonight that Lincoln doesn’t have the horses to win the Best Picture Oscar, and Spielberg is probably out of the running also. And the reason for the latter, I think, is that he looked scared tonight. Playing the Clinton card was basically Spielberg saying to himself, “How do we shake this race loose and tip it in our favor? Obviously we have support but possibly not enough. That fucking Critics Choice Argo win didn’t help any. I know…I’ll call up Bill Clinton and have him make a pitch for it!”

It’s now Argo in the lead for Best Picture vs. Silver Linings Playbook with Lincoln in third place.

I dislike movies that exploit fear of evil predators and general undercurrents of dread. You can’t be Pollyanna and you have to be careful, but you also have to understand and accept the fact that the vast majority of people are reasonable and considerate. You can’t live in a fear cage. You can’t live life like a deer drinks from a stream in the forest, always looking up every two or three seconds to make sure a predator isn’t approaching.

Every now and then I get this Tony Soprano anxiety thing in which you can’t stop scratching your arm or your leg. No matter how hard you scratch it still itches. You have to use kitchen knives to make it go away. It happened again last night. I used Tony Soprano’s name because when I saw him constantly scratching his arm during the first or second season of The Sopranos I recognized myself.

What I realized last night is that the scratchies can be (or perhaps always are) specifically linked to something you’re nervous about but have been suppressing. I used to think they just happened when they happened because they felt like it.

During last night’s Jerry Lewis Cinefamily tribute “the normally taciturn Lewis, answered a question about The Day The Clown Cried by saying that he objectively looked at the movie and felt it didn’t work…and [therefore] it would never see the light of day,” a friend informs.

The 85 year-old Lewis “shot many questions down, saying it would take too long to get into,” the source adds, “but he offered a lot of cool stuff” including that that he was originally offered to direct Take the Money & Run and decided no and then urged Woody Allen to do it.

Due respect to tonight’s Golden Gobes co-hosts Tina Fey and Amy Poehler, but I suspect (we all suspect) their opening monologue isn’t going to be as snarky or ill-mannered or snap-crackle-pop as Ricky Gervais‘ material was 12 months ago. Good comedians say the things we think but wouldn’t dare say in mixed company. Funny is dangerous taunting in a subtextual way, coming close to a defamation-of-character lawsuit, dancing on the edge of a slippery cliff.

I’ll be attending a Fox Searchight viewing party (starting just before 5 pm Pacific) and then hitting the after-parties. But first I have to crawl under a friend’s house and put up floor insulation with a staple gun.

Tonight’s big question is whether or not Les Miserables wil enjoy its “last grand hurrah” (in the words of TheWrap‘s Steve Pond) by taking the Best Motion Picture, Comedy or Musical award, or whether Silver Linings Playbook, the galloping momentum horse of the moment, will snatch it away.

The point of the Golden Globes “is that the show is a party, that it’s looser than the Oscars – much is made of the fact that they serve alcohol at the tables – and that its results are essentially insignificant, because even the people winning the awards know that the voters are 80-odd junket-loving correspondents for foreign newspapers and magazines who do not exactly have critical or professional credibility,” Pond writes.

“Would the Oscars put up with a host implying that their award was for sale? The Globes not only did that with Ricky Gervais, they invited him back to savage them twice more. Even the HFPA knows that it’s about looseness and fun and ratings and that TV money. It’s about creating only a paper-thin illusion that the show means something, knowing that the only folks who buy it are the ones who aren’t really paying attention.”