I really admired, was thoroughly engaged by and, to my surprise, was even emotionally moved by Jacob Kornbluth‘s Inequality For All, a profile of economist and former Labor Secretary Robert Reich. I haven’t time to write anything with a 6 pm screening of Michael Winterbottom‘s The Look of Love breathing down my neck, but here are a couple of snaps from the post-screening q & a at Park City’s Prospector Square cinema. 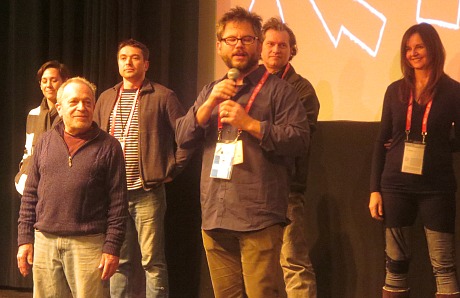 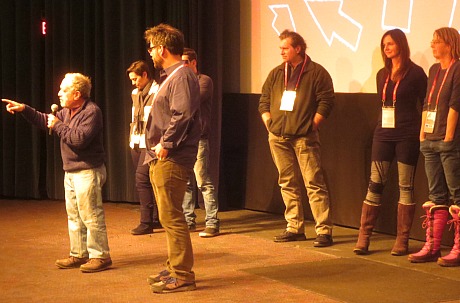 I tweeted a couple of hours ago that no films have truly levitated anyone so far. A few likes, two big likes (Inequality For All, 20 Feet From Stardom) and…? You tell me. I realize, of course, that Saturday is technically only the second day so let’s not sound too dispirited. But if nothing hits big tonight, Sunday, Monday or Tuesday…just saying.

Joseph Gordon Levitt‘s Don Jon’s Addiction, which is likable if overemphatic at times, had its big screening at the Eccles last night. In a sense it’s already old news around Park City. Gotta make way for the new. I arrived late and watched it from the upper balcony, which has happened only once before in my Eccles-attending life. Then I went downstairs and took this when the q & a began. Here’s Todd McCarthy‘s Hollywood Reporter review.

I experienced a bulletproof moment last night. Fairly amazing. I fell on some ice and came crashing down on my right elbow, and nothing happened. I got right up and kept walking. My glasses were destroyed but no aches or scrapes, no bruises, no morning-after stiffness, no Advils…nothing. I could have theoretically busted my arm. A great feeling.

It was vaguely akin to that Pulp Fiction moment when John Travolta and Samuel L. Jackson are shot several times by a kid who bursts out of the bathroom and yet none of them are hit — all the bullet holes are in the wall behind them. This led Jackson to want to quit being a hitman and just “walk the earth” like Caine in Kung Fu, “meet all kinds of people, get into adventures.” 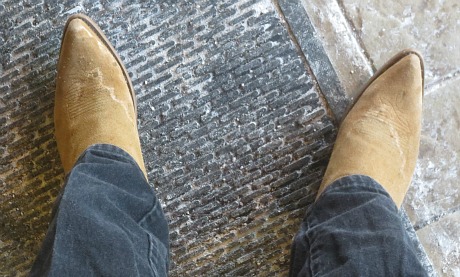 The distributors we’re looking to deal with on Phase Two have been slow to pull the trigger, and so today and tomorrow I’m stuck with those loathsome ‘PUT YOUR MOVIE AD HERE” fillers. I’ve always made it a policy to fill the ad space with at least somewhat sexy-looking film ads, and now HE looks like some kind of fire-sale site. My apologies to those who are accustomed to the usual tony environment.

I got up early and slammed it for three and three-quarter hours (writing, packing, changing condos) so I could make this morning’s 10 am p & i screening of James Ponsoldt‘s The Spectacular Now. I arrived at the Holiday Cinemas at 9:45 am and walked into the white tent where N.Y. Times critic Manohla Dargis and Hollywood Reporter critic Todd McCarthy were also waiting for the Ponsoldt. Then we were ushered outside and told we couldn’t attend because it was sold out. Really? Yup, sorry.

I thought that having an Express Pass meant you’ll get in even if you come late. Nope. A Sundance volunteer asked if there were any buyers in our group and some guy in a blue parka said “yeah” and stepped forward and was allowed in. “Why don’t the buyers just have their own screenings?,” Dargis said. Somebody joked about her grumbling. “I’m not grumbling,” Dargis replied. “I’m just…” I missed the rest of it, but if I were she I would’ve said the following: “I’m not grumbling, actually. I’m theorizing about new organizational paradigms and priorities. It’s a process.”

I guess I should have made a point of seeing it last night (8:30 pm) at the Library. That’s where all the cool kids were apparently.

Is Ponsoldt reading this? Or a rep for The Spectacular Now? Let it be known that top-dog correspondents for Hollywood Elsewhere, The New York Times and The Hollywood Reporter were stiffed this morning — left high and dry in a cold parking lot, forced to think on their feet and re-imagine their morning and re-calculate their schedule.

So now it’s 10:27 am and I’m back at the Park Regency. I have an hour to kill before walking to the Eccles for Lynn Shelton‘s Touch Feely.

I’m sorry but this tweet hit me yesterday morning and I couldn’t stop laughing. Not even at my lowest misanthropic nadir would I dismiss/condemn each and every person (janitorial staff included) at an airport. I could write 1000 words about this tweet without blinking an eye. I could write 5000 words. It’s one of those “nihilist essence” utterances.

Last night I saw Joseph Gordon Levitt‘s Don Jon’s Addiction (a decent character-arc piece, the spiritual growth of a Guido, nice ending) at a 6 pm Eccles screening, and then I ran around a bit and returned for a 9:45 pm Eccles screening of Anne Fontaine‘s Two Mothers — a farce, a calamity, one of the worst Sundance films I’ve ever seen or ever will see.

And now it’s 9:10 am with my first screening of the day, James Ponsoldt‘s The Spectacular Now, at the Holiday Village at 10 am. Followed by a 12 noon showing of Lynn Shelton‘s Touchy Feely at the Eccles, and after that a 3 pm screening of Jacob Kornbluth‘s Inequality For All at the Prospector Square. Followed by Michael Winterbottom‘s The Look of Love at 6 pm at the Eccles. Four films per day is my limit. Which allows me barely enough time to bang out little doo-dad riffs, much less reviews.

I’ve been up since 6 am and re-packing because we’re switching condos today. You have to be out at 11 am but the new place won;t be ready until 4 pm….terrific.