You can call them “homeless” if you want, but to me they’re bums. Bums and rummies. And they’re all over downtown Santa Barbara and squatting on State Street in particular, and a lot of them have dogs. Those poor sad dogs. What a life. Listen to me — I’m almost ready to go out and give a buck or two to the next vagrant-with-a-dog that I see. I don’t give a hoot about bums but I feel genuine sympathy for the dogs…and the bums know that, of course.

Santa Barbara is one of the big bum meccas of Southern California. There are bum hang-outs in the downtown area, bum flophouses. This is what a tolerant, politically correct culture has to accept and put up with. I don’t flinch at bums in Manhattan where you expect to see a little squalor, but bums lying around in groups of two, three and four on State Street with all that affluence and Spanish architecture in the background — somehow that feels like a different deal. There are no bums in Tokyo or Hanoi, or none that I noticed. But boy, do they have them here. 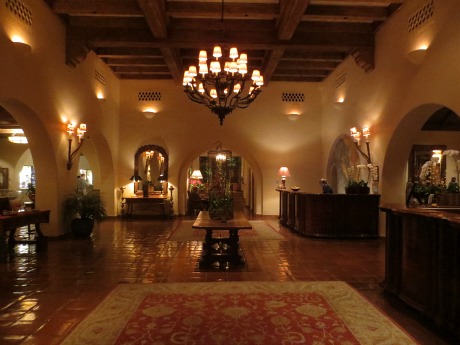 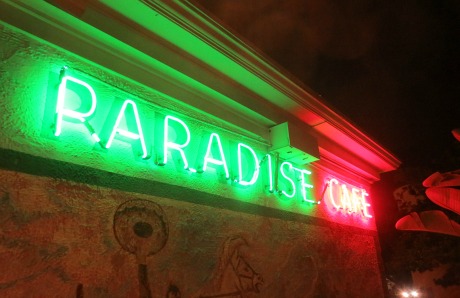 Ben Affleck‘s win at tonight’s DGA Awards will be the last clean-up operation, the final vanquishing. Those die-hard Lincoln supporters, huddling by campfires, can hear the tramp-tramp of General Santa Anna’s army. Laurence Olivier to Tony Curtis: “The night passes slowly…doesn’t it, Antoninus?”

If you had told me during last September’s Telluride Film Festival that Argo would win the Best Picture Oscar like the army of Alexander the Great conquering Persia, and that Affleck would ride into the conquered city on a white horse with rose petals thrown at his feet, I would say “what…? It’s a satisfying, well-made film as far as it goes but come on…this can’t be the conquering film of 2012. It’s not artful or majesterial enough.” But it is. This is what it’s come to. This is who and what we are. And all because Affleck was snubbed as a Best Director nominee by the Academy.

Straightforward, back-to-basics rock ‘n’ roll — no bullshit lyrics, unaffected delivery + guitar, bass and drums. Lou Reed‘s Dirty Boulevard (off the 1989 New York album) was one of the songs that got me high and sustained me through many, many car trips in the ’90s. The kids and I used to sing it together.

Last night I watched the first two episodes of David Fincher and Kevin Spacey‘s House of Cards on Netflix, or more specifically on my iPad3 as I laid flat-ass on a big bed in a Santa Barbara hotel room. I found it familiar but pleasurable like a good juicy steak or my favorite flavor of popsicle. Was I staggered by it? Was I doing cartwheels in the hotel hallway? Awe-struck, open-mouthed? No, but I felt taken care of. It was like sinking into a womb with a drink in my hand, and I don’t drink. 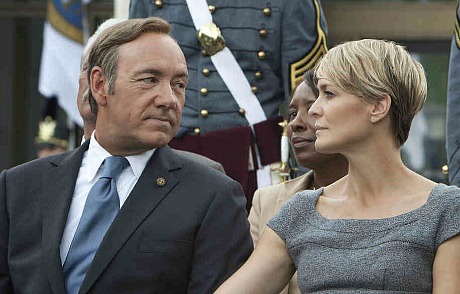 If I was partly or mostly satisfied, my plan would be to watch the remaining 11 episodes of Season #1 on a piecemeal, catch-as-catch-can basis. But I intend to binge when I return to L.A. tomorrow afternoon. I want all of it, all of it, not just some of it but all of it.

House of Cards is about Spacey’s Frank Underwood, the House Minority Whip, going on a revenge tear after a promise that he’ll be appointed Secretary of State is reneged upon by a new U.S. President. It’s essentially Richard III — reptilian ruthlessness, breaking-the-fourth-wall asides, etc. — in our very own Washington, D.C. Subtle maneuvers, inflicting pain and really loving it. This is default Spacey, what he’s best at, yah-yah.

Honestly? I didn’t really believe that Rep. Underwood would devote himself this fully to destroying two nominated cabinet members. (Lord knows what he’ll do in episodes #3 to #13.) Because revenge is for suckers. What goes around eventually comes around and sooner or later the aroma of vengeance leaks out. So if F.U.’s agenda is sure to be discovered (as he surely realizes deep down) why go there in the first place?

Simple — because it’s fun for us, sitting out there in Netflix-land, to watch F.U. stick the knife in time and again, and then wink as he slides it back into the sheath. Jaded, darkly amused, half-bored. But c’mon…this kind of behavior is fairly whacked, and even on a sociopathic level it argues with the way things actually work out there.

The hunchbacked Richard III — bitter, self-loathing, barked at by dogs — gave himself to evil because he had no other pleasures. Better a king in hell than a peasant in heaven. But Rep. Underwood has a high position, wealth, power and a 40ish, moderately hot Lady Macbeth-type wife (Robin Wright)…just not enough to satisfy him at this stage in his life, or so he tells himself.

The bottom line is that Spacey’s Machiavellian monster is amusing to watch but you can’t root for the guy, not really, so watching House of Cards becomes an arm’s length, heh-heh experience. No investment or empathy. But that’s okay.

I had a big white pillow sitting on my chest with the iPad 3 resting on it, and I was just pigging out, man. Swimming in that shit. But I think I’ll catch the rest of the series on my 50-inch Vizio. Because it bothers me to keep holding the fucking thing upright with my fingers.

Note: The last line in the second paragraph is from a Lou Reed song.