As the recent (5.26) anti-gay marriage demonstration in Paris showed, French conservatives are strongly against any kind of public acceptance or endorsement of gay behavior. So it’s not surprising that reactionaries in the Parisian suburbs of Versailles and Saint-Cloud freaked when posters for Alain Guiraudie‘s Stranger By The Lake were put on view. Deadline‘s Nancy Tartaglione reports that town officials have had the posters pulled after being “harassed” by phone calls and emails. I’m not particularly aroused or enthralled by the poster, but it’s nicely designed. Will I see Guiraudie’s film? Probably, but I honestly don’t like to watch guys eff each other…no offense. [No links because I’m tapping this out at Charles DeGaulle airport where the wifi isn’t fast or strong enough to handle WordPress’s embed-link function.] 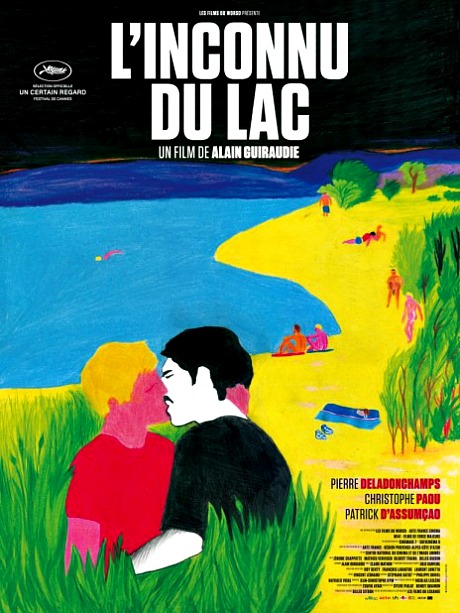 Hillary Clinton is most likely crestfallen at the news that Carey Mulligan has decided against playing her in James Ponsoldt‘s Rodham. And she’s also probably terrified, now, that Lena Dunham might get the job. Dunham, clearly, would be the best choice. She’s the right age, she exudes brilliance and she’s round enough. As I wrote earlier, Clinton had chipmunk cheeks when she was young and Dunham has that basic tendency all over. I would buy her in a second in the role. Why did Mulligan bail? Anyone’s guess.

Last night I finally saw Marc Forster and Brad Pitt‘s World War Z (Paramount, 6.21), and it’s fine. It’s not “scary” as much as a big, epic-sized action-adventure zombie spectacle with some strikingly good, super-fluid CG compositions. It’s basically a globe-sprawling, much more expensive 28 Days Later with a scruffy, broad-shouldered movie star (Brad Pitt) running around and carrying the weight and constantly phoning his wife (red-haired, alabaster-skinned Mireille Enos, who isn’t nearly hot enough for me or Pitt or anyone who isn’t Irish — she looks like an over-stressed and under-paid something or other in a low-budget Stephen Frears film).

Pitt is “the guy”…a UN guy called Gerry Lane whom everyone is hoping will somehow assemble all the pieces and clues and come up with an antidote to the zombie plague. Is anyone else on the case? Is it just Gerry? “Gerry, where are you? Jerusalem? No, that was two days ago, before the plane crash. Have you figured out what to do about the zombies yet? Your wife’s here and your daughters are safe…they’re fine. Yes, you can talk to her but Gerry? We’re just hanging out on an aircraft carrier, Gerry. We’re counting on you to take care of this.”

The zombies are like termites or locusts or flying ants. Metaphors for mass anxiety and overpopulation and various states of mass deprivation and desperation and slaughter…life is cheap, my friend, and we’re not living through placid times. Just about every visionary futuristic film these days is dystopian. Our planet is under siege from climate change, strained, crumbling, ripping apart…and Hollywood is not about to let us forget it.

You know what World War Z reminded me of, or is a cousin of? Ron Fricke and Mark Magidson‘s Samsara, which I saw and wrote about last October. “It left me with the feeling that there are way, way too many struggling third-world people in the world,” I said. “What a truly miserable existence for so many hundreds of millions. The world is just swarming with millions and millions of people…millions of swarming ants…how cold, how horrid, how truly miserable, how immensely and suffocatingly depressing.”

Except World War Z isn’t depressing — it’s exciting and absorbing as far as it goes. And Pitt is cool to follow and hang with. And Forster knows how to handle wowser action sequences this time, which is more than you could say for his direction of Quantum of Solace. I just wish there weren’t so many cutaways to Enos and the little girls. Okay, okay, he cares about his family, fine…now can we get back to the madness?

I wasn’t floored but I was definitely okay with the film. Two or three times I opened my mouth with an “oh my effing God…whoa!” Once or twice I chuckled in amusement. But at the same time I would only slightly argue with what Topless Robot’s Luke Y. Thompson wrote: “As has been with the trend with tentpoles this summer, World War Z [is] competently made and has enough memorable moments or scenes to make you walk out feeling like you weren’t cheated out of the ticket price.” It’s much more than “competently made” — a lot of serious exacting work has gone in to making this thing look and feel and sound right. But it’s just a good mass-zombie movie that cost a shitload (i.e., $200 million).

How does the re-written and re-shot third act play? Decently. Not badly. But I hate movies that conclude like chapters in a serial. If you want to make a sequel, fine, but end your movie like a man. Make it feel like an “ending.” Yes, I’ve been okay with this kind of thing. I was fine with the things-are-far-from-resolved finale of The Empire Strikes Back but every expensive movie is a potential franchise-tentpole these days, and I’m getting sick of movies that don’t have the balls to just end. Effing agents, studio chiefs, marketing vps…eff you all.

I’ve never read Max Brooks‘ World War Z novel, but I’ve read about it and it’s clear that the film has been scrubbed clean of all political comment and criticism. Here’s an indication (taken from the book’s Wiki page) of what Forster and Pitt’s movie doesn’t provide:

“Reviewers have noted that Brooks uses World War Z as a platform to criticize government ineptitude, corporate corruption, and human short-sightedness. At one point in the book, a Palestinian refugee living in Kuwait refuses to believe that the dead are rising, fearing it is a trick by Israel. Many American characters blame the United States’ inability to counter the zombie threat on low confidence in the government due to conflicts in the Middle East. Brooks also shows his particular dislike of government bureaucracy. One character in the novel tries to justify lying about the zombie outbreak to avoid widespread panic, while at the same time failing to develop a solution for fear of arousing public ire.

“Alden Utter, a reviewer for The Eagle, notes similarities between the government’s response in the novel and the aftermath of Hurricane Katrina: ‘Early warnings are missed, crucial reports go unheeded, profiteers make millions selling placebos, the army equips itself with tools perfect for the last war they fought and populations ignore the extent of threat until it is staring them in the face — this is, surprisingly, a post-Katrina zombie tale.'”

“Brooks has also criticized American isolationism: ‘I love my country enough to admit that one of our national flaws is isolationism. I wanted to combat that in World War Z and maybe give my fellow Americans a window into the political and cultural workings of other nations. Yes, in World War Z some nations come out as winners and some as losers, but isn’t that the case in real life as well? I wanted to base my stories on the historical actions of the countries in question, and if it offends some individuals, then maybe they should reexamine their own nation’s history.”