“The most interesting thing about the popularity of superhero movies is that they are insanely expensive to make, yet they spring from a plebian, populist artform,” The Guardian‘s Joe Queenan wrote two days ago. “Comic books, at least until recently, were cheap. They were beautifully drawn and exciting, but they were still basically cheap. That was the point. Movies are not cheap, especially not in 3D. Comic-book heroes, like football players, have lost all contact with their proletarian roots.

My heart skipped a beat when I first glanced at Dr. Svet Atanasov‘s Bluray.com review of the new 12 Angry Men Bluray from the UK branch of MGM/20th Century Fox. I thought for a second that this transfer might not look as grainy as the Criterion Bluray version. I find pronounced grain distracting; always have, always will. You want to see a version that looks really good without any noticable grain? Watch the free YouTube version. I’m serious. 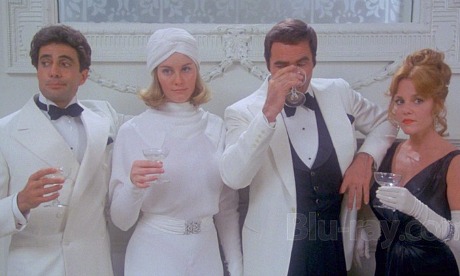 To most people, Elysium (TriStar, 8.9) sounds like another Oblivion. Similar sound, four syllables, futuristic. Tom Cruise precedes Matt Damon, Joseph Kosinski precedes Neil Blomkamp. Chilly, survivalist, dystopian. Swells live in orbit above earth, mongrels barely surviving on spoiled/abandoned terra firma. My money’s on the Blomkamp because (a) it seems more visually complex and action-driven than Oblvion, (b) on some level it reminds me of THX-1138, and (c) District 9 was cooler and smarter than anything Kosinski has ever made or is likely to make.

As I first observed last March after catching an early trailer for Let Me Explain (Summit, 7.3), comedian Kevin Hart is into connecting with the masses. He loves making people laugh, being applauded, cheered, recognized. But he doesn’t seem all that funny. And I’ve been laughing for years with/at Chris Rock, Richard Pryor, Eddie Murphy, etc. Is Hart the Gallagher of black comics? In the new redband trailer there are six or seven cutaways to urban types laughing at Hart’s material…we get it, we get it.

Oh, and the bit about being chased by a howling “deerbra” (half-deer, half-zebra) is unfunny because it appeals to the low-rent mentality of shopping-mall habitues. Nature! Nature’s comin’ after me, gonna take a bite out of my leg!

Last March: “Kevin Hart standing before a huge crowd at Madison Square Garden and being adored like God…they love me! Hart’s narration says Let Me Explain is about the joy of making people laugh. The footage, on the other hand, shows how deeply insecure he is, and how much he needs to fortify his ego. The cheers, the crowds, the adulation…Ceasar!

“A press release announces that Hart’s 2012 ‘Let Me Explain’ concert tour made $32 million. Leapin’ lizards…that’s a lot of money! I’ll bet Kevin can afford to buy a shitload of stuff now, right? Let Me Explain must therefore be really funny. After watching this trailer I wouldn’t see Let Me Explain if Hart personally paid me $100 to do so. Which he could afford.”