I saw Woody Allen‘s Blue Jasmine last night, but I can’t say anything. Well, maybe something. I can at least say that Cate Blanchett‘s fierce, ragged-edge performance as the Ruth Madoff-y Jasmine, the pill-popping, vodka-slurping widow of a disreputable high-finance finagler (Alec Baldwin), burns into your head minutes after the film begins and all but forces you to acknowledge that she’s an instant Best Actress contender. It’s clearly “one of those performances,” if you catch my drift. (The fact that it’s only July 10th mitigates this somewhat, but it’s balls-out any way you slice it.) Blanchett’s performance borrows a little from Judy Davis‘s neurotic nutjob in Husbands and Wives and then piles on the rage and (self-) loathing and denial like shovelfuls of dirt in a cemetery. I shared my thoughts about the film an hour ago with a publicist but that’s for later. It’s very much an above-average Woody but I can’t go any farther…later.

Filth won’t open in Scotland until sometime in late September; perhaps it’ll have its North American debut at the 2013 Toronto Film Festival but who knows? I’ll tell you what I do know. I know that it’s been over-trailered.

I’ve selected two exceptional portions from Tom Junod‘s profile of Elysium, Behind The Candelabra and Monuments Men star Matt Damon in the current Esquire — the first being a Junod riff about Damon’s almost-regular-guyness and the second a great Beatles anecdote by way of Bono.

With a single, well-reported article, Slate‘s Sharon Shetty has all but destroyed the credibility of Ken Scott‘s The Delivery Man (Touchstone/Disney, 11.22) and with it the credibility of Starbuck, Scott’s Canadian-made original. Shetty began with my 7.2 “Son of Starbuck” piece, in which I asked how many pints or quarts it would take for a single guy to father 535 children, and came up with some real-world answers that won’t put a smile on the faces of anyone behind this film (i.e., Scott or his star, Vince Vaughn, or the various attached Touchtone and Disney execs).

The bottom line is that it would be awfully damn hard as well as bureaucratically unlikely for one guy to father 535 kids via sperm bank donations as (a) Vaughn’s character would be required to ejaculate over 1,000 times into vials and (b) within the realm and regulations of sperm banks this level of delivery would take about seven years to accomplish. 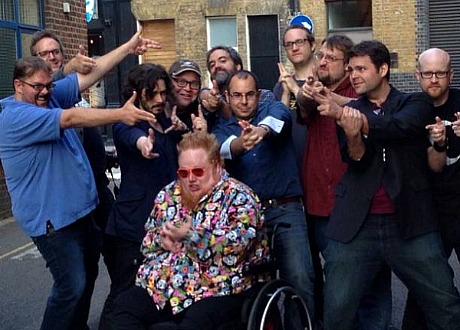