Support on Patreon Follow @wellshwood
8 Comments
“One Of The Reasons That I Don’t…”
July 17, 2013 6:11 pmby Jeffrey Wells
62 Comments
Jasmine On The Fly

After seeing Woody Allen‘s Blue Jasmine on July 9th a publicist asked me what I thought. Instead of posting a full-on review (which is difficult sitting at a Starbucks on Eighth Ave. at 6:05 pm with a 7pm screening to catch), I’m just going to post my response and fill things in later: “It’s a very good film that often sinks in, but it’s not a great one,” I began. “The Streetcar Named Desire parallels are obvious and abundant, but it also has its own flavor and motor and undercurrent. Blue Jasmine isn’t a tragedy — it’s an examination of the venality of the 1% by way of the personality and choices of one extremely fucked-up, vodka-slurping woman who’s adrift and panicking.

“Allen’s film is appropriately dispassionate in this regard, but there’s also something a wee bit cold and clinical about it. To a slight fault, I mean.

“Like many of Woody’s films Blue Jasmine feels like something that should have been refined and rewritten before going into production. If it had it could’ve been that much better. I was with it as far as it went. I’m not putting it down by calling it a B-plus level achievement for Woody. It’s fine. It’s just not A or A-plus-level.

Rolling Stone‘s decision to run an intriguing, semi-attractive, clearly-intended-to-flatter rock-star photo of Jahar Tsarnaev, the Boston marathon bomber, is a gross and heinously cynical act. It basically announces (and not for the first time) that sales and controversy are everything, and that all celebrity is equal and that the reason for this or that person being temporarily famous is immaterial. What say the HE heavy cats? Is it cool or even so-whatty to run a cover photo of a sexy, dreamy-faced enemy of the people? 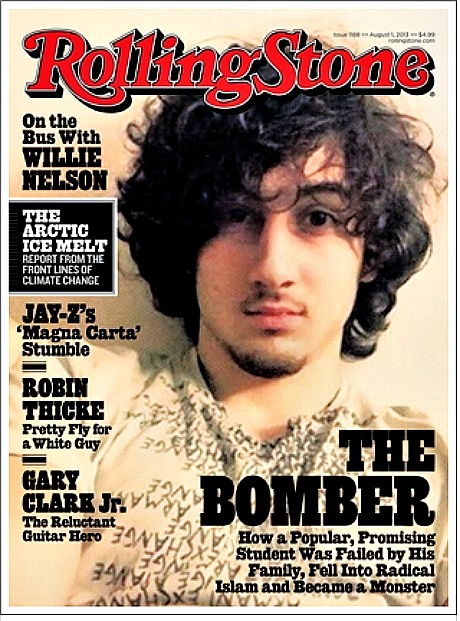 A Hollywood salaries Forbes article by Dorothy Pomerantz reports that Liam “Paycheck” Neeson was only the 10th highest compensated superstar actor for the period between June 2012 and June 2013. Robert Downey, Jr. (Iron Man, Avengers) was in first place with earnings of $75 million, and Channing Tatum was second with earnings of $60 million, due in large part to his producer points on Magic Mike.

Hugh Jackman came in third with $55 million. Fourth-place Mark Wahlberg earned roughly $52 million with his Ted revenues while Dwayne “The Rock” Johnson nabbed $46 million for a fifth-place slot. And then you’ve got Leonardo DiCaprio in sixth place with $39 million (is that all? a mere $39 mill?), Adam Sandler in seventh place with a modest $17 million. The bottom three are/were Tom Cruise, Denzel Washington and the afore-mentioned Neeson.

Wells to Cruise, Washington, Neeson: You’re slipping, guys. Before you know it you’ll be the twelfth-highest paid and then the seventeenth-highest and then the 25th highest, and then you’ll wake up one day you’ll be even further down the totem pole, and eventually you’ll be out of the game and wondering what happened. People will be saying “Tom who?” or “Denzel used-to-be.” Get that price up now while you can. Make that dough! Get yourself a nice CG sci-fi bullshit action-thriller to star in — you can do it! Do you guys realize that Downey is laughing at you behind your backs right now, as we speak? If I know Tatum he’s howling with laughter…he’s rolling on the floor at how much of a bigger deal he is than any of you three. “They used to be the big cheeses,” he’s giggling to himself. “But not so much any more…hah!” Are you going to take that?