According to a 9.11 Steven Zeitchik story in the L.A. Times, John Wells and Tracy Letts‘ August: Osage County ends with those mushy, inconclusive shots of Julia Roberts‘ Barbara character driving away in a pickup truck instead of Meryl Streep‘s Violet sitting in her home all alone (which is how the play ended) because — get this — plebians in test screenings didn’t like the Streep ending and “they were terrified about what happened to Barbara,” says Wells.

Zeitchik’s story says that Wells and Letts were/are for the original ending, but the producers and the Weinstein Co. are in favor of the pickup-truck ending. 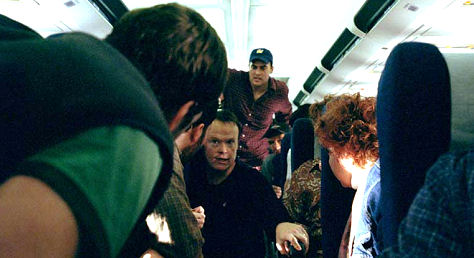 Christian Clemenson (kneeling) as Thomas Burnett in the middle of passenger huddle during last act of United 93; Cheyenne Jackson, as Mark Bingham, is standing behind with the maroon shirt and hat.
(More…)
September 11, 2013 12:29 pmby Jeffrey Wells

Escape From Tomorrow – Trailer by cleetusvandamne

Yesterday afternoon I saw David Frankel‘s One Chance, a simplistic, made-for-the-schmucks heartwarmer about the struggle of real-life British tenor Paul Potts (James Corden) to find the confidence (and overcome his incredibly bad luck when it comes to accidents and ailments) to become a professional opera singer, which he manages to do in 2007 after breaking through on Britain’s Got Talent. The problem is that we have to hang with a sad-sack, next-to-no-confidence, one-expression Fatty Arbuckle for two and three-quarters acts until he gets it together at the very last minute. Yes, the ending works — it makes you feel good. But this is “populist”, dregs-of-the-gene-pool filmmaking at its most obvious and tiresome.

Eight years ago Vera Farmiga‘s powerhouse performance in Debra Granik‘s Down To The Bone was as vital as air and water. She was the shit, Anna Magnani with ice-blue eyes, the toast of the town, etc. And then came those knockout performances in The Manchurian Candidate, Breaking and Entering, The Departed, The Boy in the Striped Pajamas, Nothing But the Truth, Orphan and Up in the Air. And then performances in Henry’s Crime and Source Code and then her directorial debut, Higher Ground, in 2011. And now this dynamically talented hyphenate is doing…horror? The Conjuring plus the Bates Motel TV series gave me pause. How quickly this industry downgrades the brightest lights by casting them in factory crap.

37 Comments
For The Record

Alfonso Cuaron‘s Gravity (Warner Bros., 10.4) is a brilliant, visionary and groundbreaking film, and a great gift to exhibitors because it makes the theatrical experience an absolutely necessary component. And if it gets nominated for Best Picture, great. But at heart it’s a “ride” movie. And as a film about a woman alone trying to survive in space it’s obviously a close relation of J.C. Chandor‘s All Is Lost (Lionsgate, 10.18). And when you compare the two, Lost is a case of less-is-more — a richer thing thematically (the story of a 70-something sailor trying to stay alive by his resourcefulness is more metaphorically affecting than one about a 30-something female scientist trying to remember or figure out spacecraft technology) plus it’s aimed at intelligent over-30 adults while the $80 million Gravity is aimed at the ADD generation. Which is more exciting, entertaining and more visually breathtaking? Obviously Gravity. Which is the deeper, more meditative, and more stylistically audacious for the no-dialogue element alone? All Is Lost. Which is also a film that you have to see in a theatre.