In the view of New Yorker critic David Denby, All Is Lost “wouldn’t have been as moving with a man of, say, George Clooney’s age; it wouldn’t have had the nobility of endurance to the same degree. Now seventy-seven, Redford is in great shape, and the cheekbones and the jaw, despite a wrinkled shell, have held up—a visual sign of character surmounting age. The anxiety in his eyes as death approaches is unsettling, since it may be something that Redford the man feels, too. He does more acting in this movie than he has done in all his earlier movies combined. “

At last night’s L.A. premiere of 12 Years A Slave, director Steve McQueen, star Chiwetel Ejiofor and costar Lupita N’yongo were asked about Madonna having allegedly texted (and reportedly agitating those sitting near her) during a New York Film Festival screening. I didn’t think it was worth mentioning when I first heard about this. It’s obviously arrogant to text during a film, especially one as great and gripping as 12 Years A Slave. Madonna knows this, of course (she’s not stupid) but headstrong Type A’s sometimes do what they want and to hell with the rules. I’m wondering, however, why Madonna turned on her phone in the first place. I’m guessing she wanted a release from the intensity of the film, and is therefore may be a kindred spirit of the screenwriter I quoted yesterday. Which bothers me somewhat. Texting in theatres is like coughing during a play.

A respectful salute is hereby offered to Awards Daily‘s Sasha Stone for laying her feelings on the line about Academy members who seem reluctant to even see 12 Years A Slave, much less afford it the respect and Best Picture consideration it obviously deserves. She was responding to the implications of Steve Pond’s 10.14 Wrap story about how a recent Academy screening of Gravity drew a huge crowd but only 500 to 600 Academy members showed up for Sunday night’s Slave screening –a respectable tally but obviously indicating a certain reluctance to see McQueen’s film given all the talk (which is 100% on-the-money) about it being a masterpiece and a Best Picture nominee slamdunk, etc.

The All Is Lost team is indebted to Grantland‘s Mark Harris for completely dismissing the chances of J.C. Chandor‘s widely-hailed film (10.18) to even be nominated for a Best Picture Oscar, although Harris puts Robert Redford at the top of his list of Best Actor contenders. This is how exceptionally good films get pushed off to the sidelines. Guys like Harris come along and go “very impressive but naaaah, don’t think so” and then the buzz starts to tilt a little more in that direction and before you know it it’s set in stone.

Note: In this piece I’m pasting DDI (i.e., Definitely Deserves It), SDI (i.e, Sorta Deserves It) and DRDI (i.e., Doesn’t Really Deserve It) after mentioning and/or discussing each film. Except, of course, for those I haven’t seen.

Harris’s list is a little weird in other ways, if you ask me.

12 Years a Slave (DDI) is his top pick, and yet Steve Pond’s 10.14 wrap piece provides yet another indication that Steve McQueen‘s masterpiece is encountering pushback from some complacent, brutality-averse Academy milquetoasts. Then comes Gravity (DDI) at position #2 (agreed — it’s a Best Picture lock) and the brilliantly composed but kinda-mid-rangey, not-exactly-earthshaking Captain Phillips in third place. The Butler (DRDI), a nicely-performed Black History Month high-school play captured on film, is Harris’s pick as the fourth likeliest Best Picture contender of 2013.

Based on an original Cormaac McCarthy screenplay about a non-criminal (Michael Fassbender) getting involved with violent drug dealers, Ridley Scott‘s The Counselor (20th Century Fox, 10.25) has been regarded from the get-go as a vague relation of No Country For Old Men, a violent drug-business tale based on a McCarthy novel. We all know that Joel and Ethan Coen always apply a dry, art-filmish tonality and that the less austere-minded Scott tends to aim for a kind of high-style pulp effect. A guy who’s seen The Counselor tells me the photography by Dariusz Wolski (Prometheus, Sweeney Todd) is beautiful, and that it contains (a) a noteworthy simulated sex scene involving a pantie-less Cameron Diaz and the windshield of a car and (b) a pleasant oral-sex scene between Michael Fassbender and Penelope Cruz. 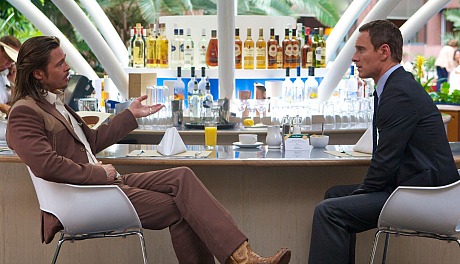 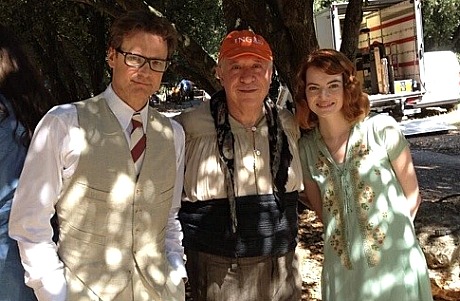 (l. to r.) Magic in Moonlight costars Colin Firth, some guy and Emma Stone during filming in the South of France.
(More…)
October 15, 2013 2:33 pmby Jeffrey Wells

47 Comments
LexG vs. Ants In Your Pants

Variety reported earlier today that Joseph Gordon-Levitt and Paul Rudd are the two frontrunners for Edgar Wright‘s Ant-Man, based on a script by Wright and Joe Cornish. Disney execs have scheduled a 7.31.15 release for the would-be franchise film. Is there an analogy to be drawn between looney-tune House Republicans threatening a debt default and sub-moronic studio zombies who can’t resist ludicrous CG superhero pulp? Could someone take a crack at it? 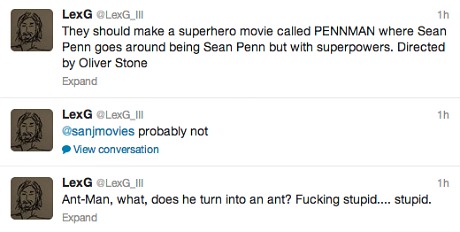 Not long ago a “picky but discerning” European screenwriter confided the following to a friend (no names, no hints) about Steve McQueen‘s 12 Years A Slave. “For me it was just a little too heavy-handed and exhausting because of its relentless brutality,” the screenwriter wrote. “But it’s a very important movie nevertheless for its subject and the fact that aside from Tarantino’s ‘spoof’ no one has yet made [a film of this type] here. If you’re in the mood for this kind of movie, I’d say go and see it. Otherwise, wait for the screener.” This is what I was talking about when I said I could feel a certain pushback coming from a certain element within the industry. Are we primarily talking about women? Perhaps the same contingent who refused to go see The Cove because they didn’t want to watch the brutal slaying of dolphins? I’m not in agreement, needless to underline, but this viewpoint is out there. Just saying.

Released today, this is supposed to be the “new” international trailer for Ben Stiller‘s The Secret Life of Walter Mitty (20th Century Fx, 12.25). Whatever, man. With the exception of an on-the-nose excerpt from Queen‘s “Bohemian Rhapasody” (“Is this the real life? Is this just fantasy? Caught in a landslide. No escape from reality”), it doesn’t play that differently than the domestic versions. I understand that you have to saturate, saturate and then saturate some more to get Joe Schmoe to pay even a little bit of attention. I accept that. I get it. No argument. I can roll with it.

I’ve decided to punk down three dollars for a 7-day Amazon Instant Video rental of Solomon Northrup’s Odyssey (a.k.a. Half Slave, Half Free), a 1984 adaptation of Northrup’s “12 Years A Slave,” which of course is the basis for Steve McQueen‘s highly praised, same-titled film which opens on Friday. Directed by Gordon Parks and costarring Avery Brooks, Rhetta Greene, Petronia Paley and John Saxon, Solomon Northup’s Odyssey was originally telecast on PBS on 12.10.84. You can half-tell that Chicago Tribune critic Gene Siskel was trying to be nice when he was wrote that “I don’t believe Roots was any more powerful or better acted than [Parks film].” (A statement that’s vaguely analogous to “I don’t think we don’t love each other.”) Somebody who wrote for the Seattle Daily Times called it “one of the best movies of the year.” Obviously it’s a lesser effort than McQueen’s film, but hopefully it’s at least watchable. Monterey Video is selling the DVD, originally released in 2005, directly from its website. 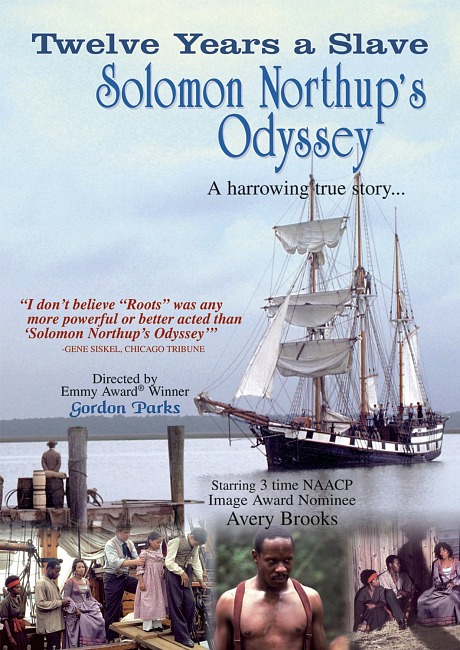 A three-day-old Live Science piece that quotes recent anthropometric data says that “the average 30- to 39-year-old American man is 5 foot 9 inches, has a 39-inch waist, and a body mass index (BMI) of 29, just shy of obesity, according to the Center for Disease Control and Prevention.” “Men also didn’t used to be so round in the United States,” the article says, “but lifestyle changes over the last 50 years have made the American population increasingly overweight.” No shit? 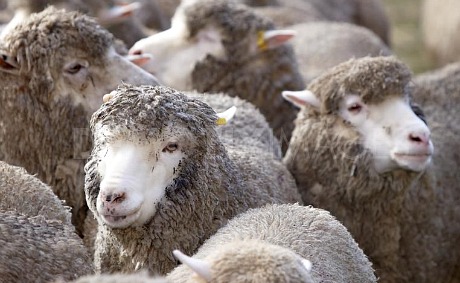