“Even ardent fans of Hollywood’s polymath pin-up James Franco may be surprised to learn that shoestring-budgeted Sal is actually the Rise of the Planet of the Apes star’s fifth feature-length movie as a director,” Hollywood Reporter critic Neil Young wrote on 9.3. “But while this heartfelt, rough-edged tribute to now largely-forgotten Hollywood actor Sal Mineo isn’t without interest, it’s too small-scale and sketchy for wide theatrical distribution.

“That isn’t in any way to knock the impressive front-and-center performance from curly-maned Val Lauren as Mineo, the diminutive New Yorker who became a 1950s teen idol thanks to movies like Nicholas Ray’s James Dean vehicle Rebel Without A Cause – the film which earned Mineo the first of two Oscar nominations. But as the ‘Switchblade Kid’ aged, his star gradually waned and by 1971 he was barely recognizable under simian make-up in Escape From the Planet of the Apes — foreshadowing Franco’s own involvement with the same revitalized franchise decades later.

“By concentrating on theater and TV, Mineo slowly edged his way back to prominence. When he was stabbed to death in a robbery-motivated murder in February 1976, he was returning home after rehearsals for another L.A. play. His short, eventful life in which Mineo was increasingly open about his homosexuality was chronicled in a 2010 biography by Michael Gregg Michaud, the source material for Stacey Miller’s screenplay. But Miller and Franco focus only on the period immediately leading up to Mineo’s demise. Only occasional dialogue references to his friend ‘Jimmy’ Dean (whom Franco himself played in a successful 2001 TV-movie) hints at his illustrious past.”

The Los Angeles premiere of Paul Greengrass‘s Captain Phillips (Sony, 10.11) happened last night at the Academy. The film played the same for me — workmanlike verisimiltude, scrupulous realism, Greengrass + Barry Aykroyd dazzle-cam — but it was different with a large crowd than with six or seven critics in Manhattan’s Sony screening room a few weeks ago. This time when the big climactic moment happened the audience cheered — drop those Somali bastards! (It’s so rare in life when tense situations are resolved with such bracing finality. Wouldn’t it be great if the Republican wackos who’ve shut down the government…I’m sorry, I didn’t mean that.) The true-life story could be subtitled “The Little Hijacking That Never Had A Chance” or “Four Fleas on the High Seas” but the expert chops speak for themselves. Ditto Hanks’ cathartic meltdown at the end — easily his best performance since Cast Away. The real-life Richard Phillips (the titular character played by Tom Hanks) appeared on the big-screen via Skype before the film began as Greengrass, Hanks and costars Barkhad Abdi, Mahat Ali and Faysal Ahmed took bows. 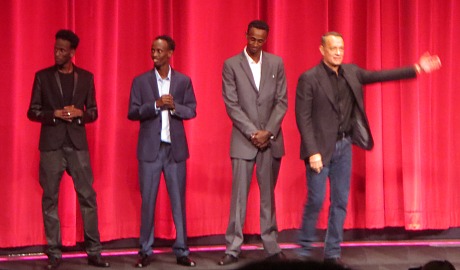 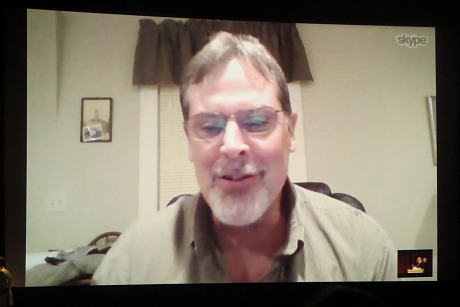 The real-deal Richard Phillips as he appeared last night at the Academy theatre screen prior to the showing of Captain Phillips. 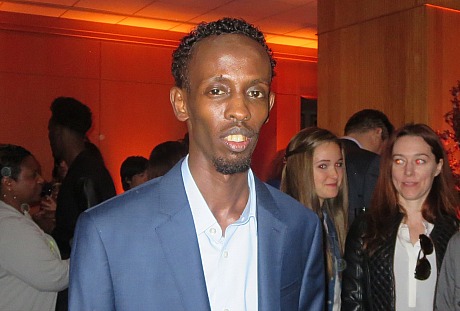 I’m down with the Minnesota-residing Barkhad Abdi, who plays the top-dog Somali pirate Abduwali Abdukhadir Muse in Captain Phillips, becoming a Best Supporting Actor Oscar contender. At the very least to round out the field. 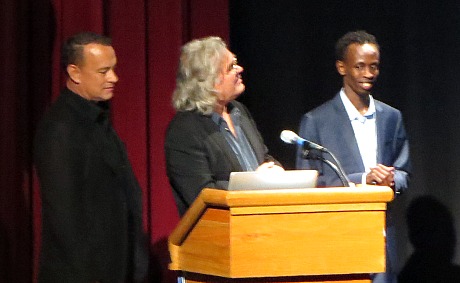