This is a stab at an iPhone obituary for Joan Fontaine, whose death at age 96 was reported today. (I’m sitting at a Pete’s Coffee across the street from the Aero, where Michael Mann‘s digitally reconstituted Thief will screen at 7:30 pm.). I heard of her departure a couple of hours ago, and like everyone else I flashed back to Fontaine’s vulnerable, haunted performance as Laurence Olivier‘s young second wife in David O. Selznick and Alfred Hitchcock‘s Rebecca, the 1940 melodrama that launched her as a big-name actress.

Fontaine won a Best Actress Oscar for playing another vulnerable, haunted wife (this time betrothed to Cary Grant‘s disreputable Johnny Aysgarth) in Hitchcock’s Suspicion, which opened the following year. But Fontaine seems a bit trapped in this possible-murder tale in more ways than one. Suspicion is a somewhat flawed film because of a notorious cop-out ending. She seems a fool for forgiving and supporting Grant at the end. Rebecca is the better crafted effort, I feel, not to mention spookier (it’s a kind of ghost story) and more atmospheric. Fontaine is much more anguished and aching in it. She carries a greater load on her back.

This is a portion of a DVD Beaver frame capture from the new Arrow Bluray of Robert Altman‘s The Long Goodbye (’73). So $5000 bills (last printed in 1934) were actually kicking around in the early ’70s? Printed money doesn’t gain in value as the years roll on, of course, but the U.S. Labor Department inflation counter says the purchasing power of $5 grand in ’73 was/is equal to around $26 grand today. So finding a $5000 bill “in a box of Crackerjacks,” as Elliot Gould‘s Phillip Marlowe explained to Mark Rydell‘s Marty Augustine, was quite a discovery. 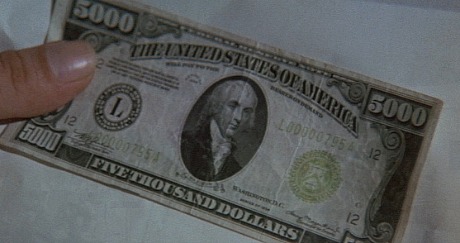 At age 81, the great Peter O’Toole has shuffled off this mortal coil. A legendary lover of drink, a magnificent royalist, a classical actor for the ages with one of the most beautiful speaking voices ever heard. Fire in the blood and diction to die for. O’Toole was a legendary personality (he could be great on talk shows), the half-mad blonde beauty of Lawrence of Arabia, an inhabitor of King Henry II (twice), the wonderfully spirited fellow who rebounded with The Stunt Man, the voice of the gourmand in Ratatouille…a brilliant man in so many respects. In private he could be a bit of snob (or at least with the occasional journalist) but when he chose to be “on” O’Toole snapped and crackled like lightning.

He had five peak periods in his career — the first three years (’61 to ’64) starting with his being hired to play T.E. Lawrence and then making the film and exploding onto the scene when Lawrence of Arabia opened in late ’62, and then following up with his best performance ever as King Henry II in Peter Glenville‘s Becket. He lost “it” for a period in the mid ’60s but then got it back as Henry redux in Anthony Harvey‘s The Lion in Winter (’68). Then he returned again with that hilarious performance as a hippie-ish paranoid schizophrenic in The Ruling Class (’72). The fourth rebound happened between ’80 and ’82 with his performances in The Stunt Man, the TV epic Masada and My Favorite Year. The fifth and final rebound happened in the mid aughts with Troy, Venus and his voicing role in Ratatouille.

A friend invited me to an event party last night on Willoughby, about a block south of the Formosa Cafe. I was immediately concerned when she said it was open to the public and that all I had to do was rsvp on Facebook. I’ll walk into any dive bar in any down-at-the-heels scumbag neighborhood in the world but I haven’t attended a Facebook-rsvp event in my life — it sounded horrible. When the door guy (heavy-set, African-American…what else?) said “show me your ID” I scowled and turned and walked back to the car. Okay, I’m spoiled. I’ve been getting invited to elite media events for 30-plus years. I’m easily unimpressed. 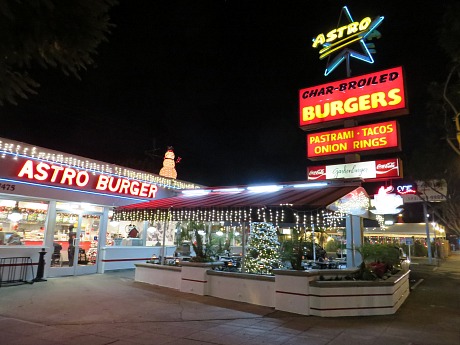 I honestly feel that West Hollywood’s Astro Burger is one of the most attractively designed commercial establishments in all of Los Angeles. This is what Vegan/health food restaurants lack — that sparkly, 1950s-era American Graffiti drive-in vibe. 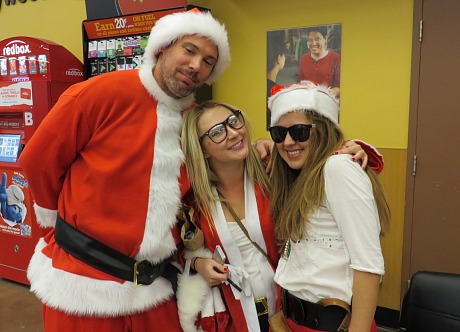 I asked the guy in the Santa suit what he and his girlfriends were doing in the Santa suits and he said, “Uhhm…celebrating the holiday?” And I said, “Really…on your own volition?” And I asked to take their photo. This happened last night around 8:45 pm in a Ralph’s on La Brea.
(More…)
December 15, 2013 10:36 amby Jeffrey Wells
24 Comments
Could Hustle Shuffle Its Way In? 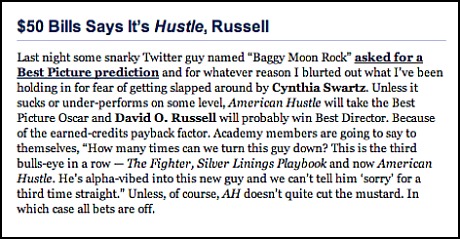